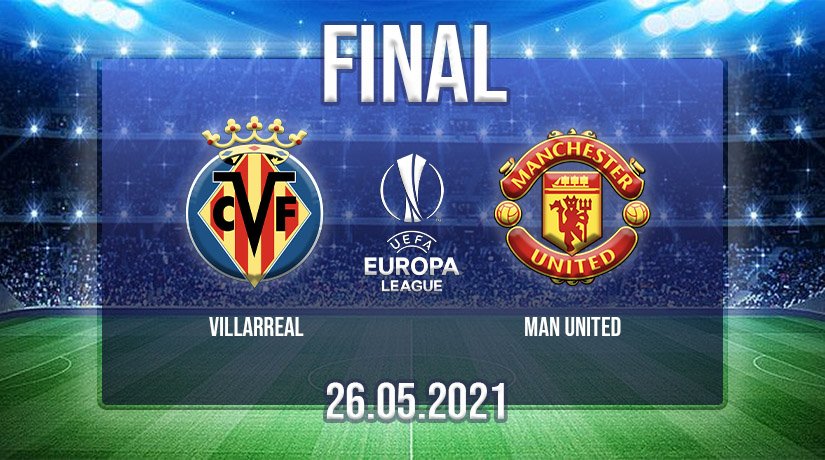 Welcome to our Europa League final prediction article, where our team of sports content writers preview the game and the current betting. The highlight of this week’s football schedule sees two English Premier League teams battle it out in the Champions League final in Portugal. There’s an appetiser booked in for 20:00 on Wednesday as Manchester United aim to reclaim the Europa League trophy when meeting Spanish La Liga club Villarreal in the final. That game will be hosted by the Stadion Miejski in Gdansk, Poland and shown live on BT Sport in the United Kingdom.

This match will pull in a global audience, including supporters from England and Spain. Manchester United are the pundits’ pick to come out on top here, but Spanish teams have dominated UEFA’s second-string competition in recent times. Will the Red Devils relive the glory days of beating Ajax in their previous Europa League final appearance under Jose Mourinho, or will La Liga tighten their grip? Read our article before making your Europa League final match prediction.

In this preview of the Europa League final 2021, we assess both teams’ strengths, history, and form. You’ll find our predicted line-ups for both teams, the head-to-head stats between Villarreal and Manchester United. We’ll then be bold enough to make our UEFA Europa League final prediction, correct score prediction and more. Everything you need before settling down to enjoy the biggest game in both team’s seasons.

The lineups for the UEFA Europa League final are pure speculation at this stage, but we can take an educated guess on the teams the managers may go for. Both Ole Gunnar Solskjaer and Unai Emery have sent their teams into some important league matches in recent weeks against strong opponents, so we will use an example of those to get a feel for the teams we may see on Wednesday. 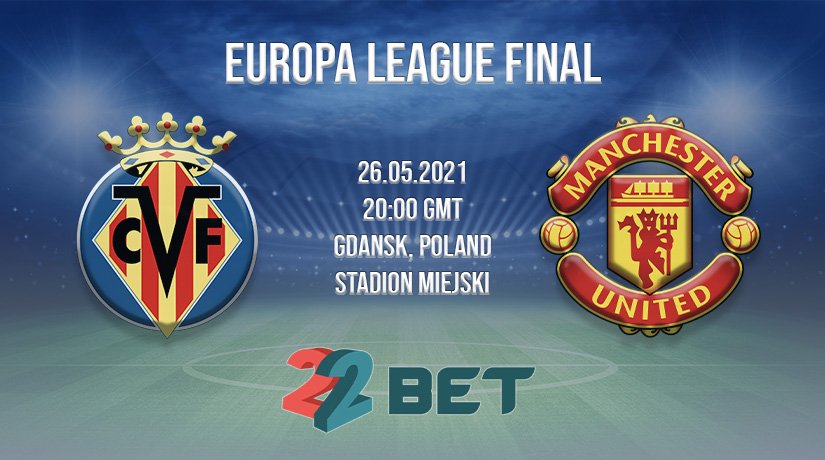 When making your prediction for the Europa League final, you’ll want as much information as possible. Some bettors may want to wait until the line-ups have been announced before making their final call on the match, and that will improve their chances of beating the bookies. The earlier you get your stake money down, the bigger the odds will be, however. That’s why it pays to do your research and take a punt on calling the starters for each side.

Manchester United played Roma in the semi-final first leg of this competition and won 6-2. It was a real show of strength against a capable Italian Serie A side. Let’s look at how the Red Devils started that match in the hope it will help with our Europa League final 2021 predictions;

Villarreal hosted Arsenal in the semi-final of the Europa League and came through thanks to a 2-1 home win over the Gunners in the first leg. It is expected they will start against Manchester United similarly to the way they did against Arsenal that day. Our UEFA Europa League final predictions for the Villarreal match is as follows;

When making our Europa League final pundits predictions, it’s worthwhile looking at the head-to-head stats between these teams. Unlike the Champions League final between Manchester City and Chelsea, there isn’t a lot to go on here as Man Utd and Villarreal don’t play each other twice a season. However, they are no strangers to facing off in competitive action, and clues can be taken from past encounters.

The stats associated with this match make for interesting reading. The teams have played four times previously, and every game has ended in a draw. What’s even more alarming is each match has produced a 0-0 correct score. That is quite incredible, but it’s something armchair fans will hope ends this midweek. There is no doubt this will be another tense and nervy affair but, as spectators, we’ll be happy to see a few goals as spectators.

If taking our lead from head to head, we would expect a low-scoring match with not too many goal-scoring opportunities. That may encourage some bettors to try their luck on this game to be won in extra time or penalties. Perhaps those wishing to take a side could go for Man Utd or Villareal to win 1-0. There are lots of possibilities.

When making a prediction for this match, there’s a lot to consider. Villareal has already beaten a strong English team in Arsenal to reach the final. But the Gunners are well behind Man Utd this season. The Red Devils were sublime in the semi-finals when scoring eight goals past Roma over two legs. They also have past experience of winning the Europa League. But, of course, Spanish teams lead the way in this competition. A strong argument could be made for either team winning this.

We’ve also got to keep in mind the head-to-head stats which read four 0-0 scores. As a major European final involving two teams with great defences, another low-scoring match is possible. Taking no in both teams to score (BTTS) market looks worth a bet and is sure to be popular, especially with those who enjoy following the head-to-head stats.

Over 100 pre-match betting markets are attached to this final, so it’s worth browsing what’s available before making your selections. One of the popular markets is the correct score betting. We’re picking Man Utd 1-0 Villarreal as our correct score play in this match with a tight game expected. You’ll find generous odds for that bet at 22Bet. 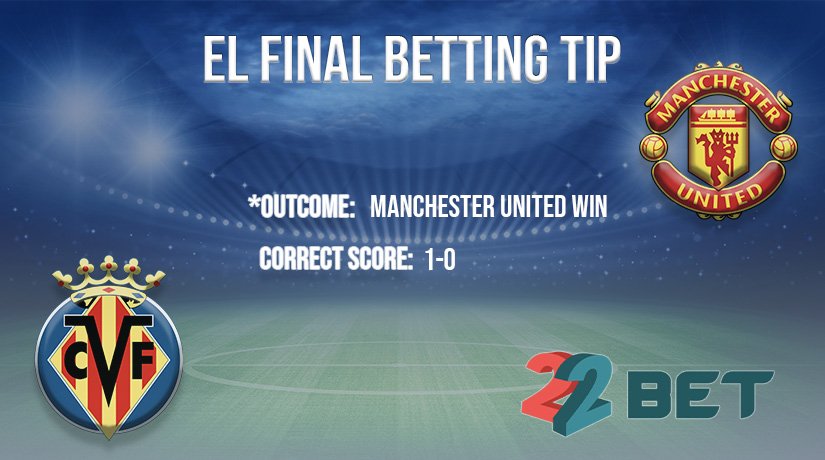 Our team has made every effort to cover the Europa League final in great detail. We aimed to do as much research into the game as possible, so you don’t have to. We wanted our readers to concentrate on placing bets and enjoying the game, allowing us to do the heavy lifting. This article aims to give you a well-thought-out and researched pick. But it’s worth remembering these are the thoughts of our team of content writers.

We suggest reading our article and taking our predictions on board, but we also suggest you do your research into the game to ensure you have covered as much ground as possible. Then you will be able to make a strong prediction on the game and enjoy the live-action knowing you made every effort to beat the bookies.

There are over 100 pre-match markets available on the Europa League final at 22Bet, including match winner, both teams to score, correct score, total goals and handicap.

When is the Europa League final this year?

What time is the Europa League final 2021?

The game between Manchester United and Villarreal will kick off at 20:00 GMT. Fans looking to watch the final involving the Premier League and La Liga giants outside of that time zone will find the kick-off time being at 22:00 GMT+3.

Where will Villarreal vs Manchester United take place?

The host for the Man Utd vs Villarreal final is PGE Arena Gdansk. Despite COVID restrictions, the location of the final remains in the venue of Poland. The stadium is the home of Lechia Gdansk.

Can I buy tickets for Villarreal vs Manchester United?

How do I get the Europa League final tickets?

The applications for tickets for the final between Ole Gunnar Solskjaer and Unai Emery’s teams are now closed. Prices for tickets ranged from between €40 and €130. The place where the final is located meant that there were will be 9,500 fans in attendance for the final.

Where to watch the UEFA Europa League final 2021?

As is the case with all Europa League fixtures in the United Kingdom, the channel that fans will be able to watch the final on is BT Sport. The channel has exclusive rights throughout the season, which means that fans were able to watch the group stage, as well as Man Utd vs AC Milan in the quarterfinals. BT Sport also has exclusive rights for the FA Cup.

Fans will be able to watch all the goals scored in the Europa League final on YouTube. BT Sport will allow fans to watch the game on their YouTube channel on Wednesday evening.

Which team is the most likely to win?

Manchester United are currently the team with the shortest winner betting odds. Many betting tips favour the Red Devils to win a first trophy under Ole Gunnar Solskjaer. However, many experts are also quick to allude to Unai Emery’s record in the competition before making a bet on the Europa League.

What are the Europa League final odds?

Manchester United are the clear favourites in the odds with 22Bet. The sportsbook also expects a cagey final, with the odds for both BTTS and over 2.5 goals being competitive. Those looking to make Europa League predictions can also find extra time betting markets. However, before making a wager, you should examine the H2H record.