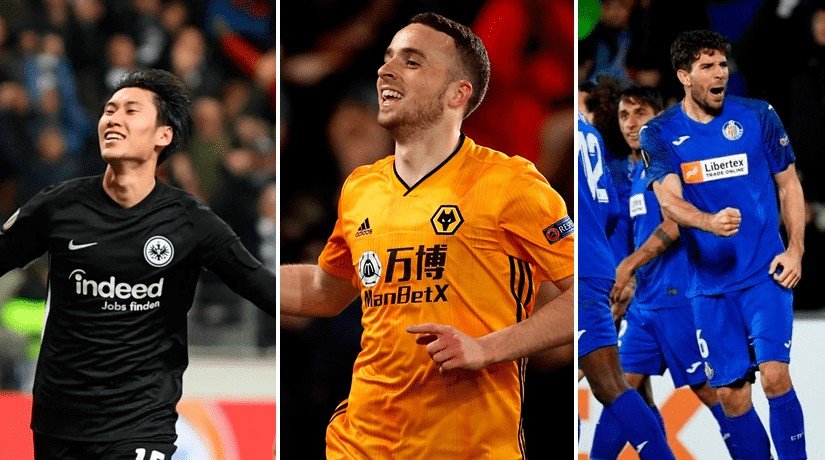 Wow. Europa League has returned with a bang! The 16 games this Thursday evening recorded 44 goals in total and there wasn’t a single 0-0 draw, with all but two clashes seeing at least two goals. Here is what happened in the first leg of Europa League’s Round of 32.

Probably our favorite game of the 16 that took place on Thursday, Frankfurt hosted and thrashed Austrian side RB Salzburg four goals to one. Club hero Daichi Kamada scored a hat-trick in 53 minutes, followed by their fourth goal thanks to Filip Kostic (56′) and Salzburg’s consolation effort in the 85th minute, produced by Hee-Chan Wang.

Two Japanese players have scored hat-tricks in the Europa League:

Wolves scored four goals to crush Espanyol’s hearts at the Molineux on Thursday night, but there is only one goal that we shall remember for a while. Portuguese star Ruben Neves rarely scores, but when he does it is an absolute stunner. Check Neves’ volley out below or on YouTube. And of course, shout out to club hero Diojo Jota for his incredible hat-trick. Good job, Wolves.

The moment we’ve all been waiting: Christian Eriksen scored his first goal for Inter, in what was his ninth shot in total, thanks to an assist by fellow Premier League deserter, Rumelu Lukaku. The Denmark international gave Antonio Conte’s men the advantage in the 71st minute, and Lukaku converted a penalty in injury time to beat poor Ludogorets two goals to nil in Bulgaria.

6 – Romelu Lukaku has scored in six games in a row in the Europa League: the last player to do better in UEFA Cup/EL was Alan Shearer in 2005 (eight). Continuous. #LudogoretsInter pic.twitter.com/fETISvNIgH

Sporting Lisbon are determined to reach the Last 16 of Europa League, especially after Bruno Fernandes’ departure to Manchester United, and Thursday night got them one step closer to their dream. The Portuguese side clinched a 3-1 victory in the first leg clash with Istanbul Basaksehir. The hosts produced a 3-0 lead thanks to goals from Sebastian Coates, Andraz Sporar and Luciano Vietto, but Edin Visca’s late penalty scrapped their hopes for a clean sheet in Lisbon.

That’s right, Ajax fell to a sorry defeat in Getafe on Thursday night. The confident and physical Spanish side triumphed over the Dutch legends, who struggled to produce a shot on target. The two goals for the hosts came from Deyverson (37′) and Kenedy (90 + 3′). Ajax must turn the game around next week when Getafe visit Amsterdam, or they are out of Europe.

Rangers fought from two goals down to produce a stunning comeback and beat the Portuguese side 3-2. Thanks to a double by Ianis Hagi and Joe Aribo’s strike, Rangers completed a thrilling comeback at Ibrox on Thursday night. This match extended Rangers’ unbeaten home record against Portuguese opposition to nine games unbeaten (winning seven and drawing two).

Cyprus side APOEL Nicosia was left stunned as Basel netted three away goals to basically secure their spot in the next round. Wolfsburg beat Malmo 2-1 thanks to Josip Brekalo and Isaac Kiese Thelin, who scored two – one for his club and one own goal. Arsenal beat Olympiakos by a single goal in Athens in a game that could be ranked as the dullest clash of this leg. Manchester United drew Clubbe Brugge 1-1 and snatched an away goal in Belgium, Alkmaar drew LASK 1-1 in the Netherlands, Shakhtar Donetsk clinched a 2-1 victory over Benfica, and Sevilla salvaged a 1-1 draw away at CFR Cluj. Check out all of the results here:

See you next week for the return fixture of Europa League’s Round of 32! Make sure to bet with 22Bet!