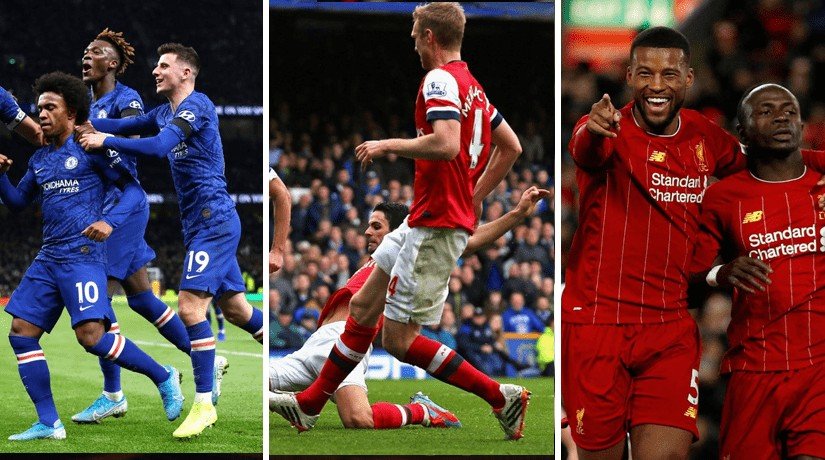 Saved penalties, VAR drama, manager rivalries, and much, much more – here is everything you need to know about what went down in matchweek 27 of the 2019/20 Premier League season!

Liverpool are 25 points clear at the top of the Premier League table.

No team in English history has ever had a lead that big at any stage of a season, until now. pic.twitter.com/yfNUllnVvb

Tottenham traveled to Stamford Bridge this Saturday for one of Premier League’s most dramatic fixtures as ex-Chelsea boss Jose Mourinho clashed with his former player, Frank Lampard in a match that Spurs lost 2-1.

2 – Frank Lampard’s Chelsea are the first team to defeat a side managed by José Mourinho both home and away in a single league season. Schooled. #CHETOT pic.twitter.com/1Z4wB1CqxW

Just as we predicted, Lampard outmaneuvered Mourinho this time. Chelsea were organized, fast-paced and smart about their play, whilst Tottenham looked dejected and “tired”, as their manager explained.

17 & 28 – Since he joined Chelsea in 2016, Marcos Alonso has more goals (17) and goal involvements (28 – 17 goals, 11 assists) than any other defender in the @premierleague, with three of these goals coming against Spurs. Nemesis. #CHETOT pic.twitter.com/wLHYvUzdSb

The hosts took the lead in the 15th minute thanks to 33-year-old veteran Olivier Giroud, who featured in the starting XI and scored his 20th goal for Chelsea. Marcos Alonso netted in an absolute belter from 20-yards out just after half-time to make it 2-0, and Spurs’ Eric Lamela scored a goal with the help of an Antonio Rudiger deflection in the last minute of the game.

“A defeat is a defeat, but the good thing is, in the last seconds the players were still fighting for a result and that for me is a very important thing,” said Mourinho after the match.

Work to do in the second half at Stamford Bridge as we find ourselves 1-0 down at half-time. #COYS #THFC

We were treated to a 5-goal thriller at the Emirates this Sunday as the hosts beat Everton 3-2, a win that means Arsenal remain unbeaten in 2020 and gives them consecutive victories for the first time since the first two matches of the season.

1 & 46 – This is the third game in Premier League history to see a goal scored inside the opening minute of both halves, after Newcastle v Arsenal in January 1996 and Charlton v Leeds in March 2001. Haste. pic.twitter.com/xMbaS78zaV

And what a game it was! Everton left Mikel Arteta’s side stunned when they took the lead just 49 seconds after kick-off, mainly thanks to Arsenal’s embarrassing defense, which allowed Dominic Calvert-Lewin to net in Gylfi Sigurdsson free-kick.

The Gunners equalized when Eddie Nketiah netted a brilliant left-wing cross by Bukayo Saka in the 27th minute, and Pierre-Emerick Aubameyang put them in the lead just six minutes later. And just as Arteta’s men felt like they finally got control of the game, their defensive line failed once again and Richarlison made it 2-2 just before half-time. Then it was Arsenal’s turn to shock with an early strike; Aubameyang’s winning header came in just 26 seconds into the second half.

Arsenal now sit ninth on the table with 37 points, whilst Everton are in 11th place, with 36.

Manchester United beat Watford three goals to nil at Old Trafford on Sunday. Yawn. Literally nothing happened until the 42nd minute of play when January signing Bruno Fernandes converted a penalty after he had been taken down by Watford keeper Ben Foster.

1 – Bruno Fernandes is the first Man Utd player whose maiden Premier League goal for the club was a penalty. Trust. pic.twitter.com/CieuAO3SKT

The second half had more to offer. Watford celebrated early as Troy Deeney scored an equalizer in the 53rd minute, only for VAR to rule it out for handball in the build-up. Then Anthony Martial scored a superb goal to put United two up, and 18-year-old Mason Greenwood sealed the scoreline with his 11th goal of the season, an explosive strike into the top left corner of the net.

Manchester United boss, Ole Gunnar Solskjaer praised his players after the match: “Bruno Fernandes is quicker than he looks. I’m very excited by having him in. He has come in, given everyone a boost and wants to conduct a game. There are big games coming up now. The thing that matters in football is scoring goals and that is what Mason Greenwood does.”

United are fifth on the table with 41 points, and Watford remain in the bottom three, with 24 points.

It was a tale of two cities as Manchester City traveled to Leicester for a true spectacle of a clash, that unbelievably ended in a single goal on the score sheet. Drama, frustration, disallowed goals, handballs, saved penalties and a total of 28 shots, this match had it all, to say the least.

Check out how on-point our prediction ahead of this fixture is.

18 – Manchester City attempted 18 shots against Leicester, the most the Foxes have faced in a single league game at the King Power Stadium since Manchester United had 19 in December 2017. Peppered. #LEIMCI pic.twitter.com/TT6wawdChC

Both teams had wasted countless chances, the best of those saw ex-Man City keeper Kasper Schmeichel deny Sergio Aguero from the penalty spot, meaning that the defending champions have now missed five of their seven Premier League penalties this season.

4 – Kasper Schmeichel’s save for Sergio Aguero’s penalty was his fourth @premierleague penalty save – one more than his father Peter made in his entire Premier League career. Pride. #LEIMCI pic.twitter.com/eJMAnOgfl7

A disappointing night, but another save from the spot by @kasperschmeichel 🛑 #lcfc

Gabriel Jesus replaced Aguero on the pitch later in the game and scored the only goal of the match ten minutes before time. Pep Guardiola’s side have now won twice since their devastating two-year Uefa ban was announced.

“Don’t ask me about the attitude of these guys,” said Guardiola. “You still doubt what they have done. These players have won seven titles in the last eight [domestic] competitions. Today, after missing the penalty, see the reaction we had against an incredibly good team, not just for where they are in the table right now but the way they played in general this season. It was an incredible test for us.”

Man City remain second with 57 points, whilst Leicester are third with 50 points. Guardiola’s men travel to Madrid to face Zinedine Zidane’s side in the Champions League this Tuesday. Predictions?

Everyone, bar Liverpool fans, was rooting for West Ham on Monday night, but alas, it wasn’t meant to be once again. Liverpool overcame determined Hammers at Anfield in a five-goal thriller that will be remembered as Lukasz Fabianski’s real-life nightmare.

The game kicked-off strong and it was one-all by minute 12 thanks to strikes by Georginio Wijnaldum (featuring a Fabianski fail, 9′), and Issa Diop (featuring an Alisson flop, 12′). Things calmed down for over an hour until West Ham took the lead nine minutes after the break with an effort by Pablo Fornals.

Everyone held their breath as Liverpool struggled to keep their 27-Premier League game unbeaten run alive, but let’s not forget that Fabianski was still in play. The keeper let in a soft flick by Mohamed Salah right through his legs in the 68th minute, followed by Sadio Mane’s winner nine minutes later.

Jurgen Klopp’s men are within four wins of the 2019/20 Premier League title, whilst West Ham are in the relegation zone with 24 points.

That’s it from the big ones of matchweek 27! See you next weekend, make sure your bet with 22Bet!

The German issued a response after the Red Devils supporter made the bold request having become fed up with the Reds’ winning streak Liverpool manager Jurgen Klopp has written back to a 10-year-old Manchester United fan that sent him a letter pleading for the Reds to start losing. “Liverpool are winning too many games. If you win nine more games then you have the best unbeaten run in English football. Being a United fan that is very sad,” Curley wrote. While the Liverpool boss was far from swayed, he did decide to reach out to Curley, explaining why he can’t let his side lose and that Ole Gunnar Solskjaer’s team were lucky to have his support. “Unfortunately, on this occasion I cannot grant your request, not through choice anyway,” Klopp responded. “As much as you want Liverpool to lose, it is my job to do everything that I can to help Liverpool to win as there are millions of people around the world who want that to happen so I really do not want to let them down. “I can safely say that one thing that will not change is your passion for football and for your club. Manchester United are lucky to have you. #klopp #jurgenklopp #liverpool #liverpoolfc #ynwa #letter #fan #youngfan #coach #manchesterunited #football #fussball #soccer #news #22bet