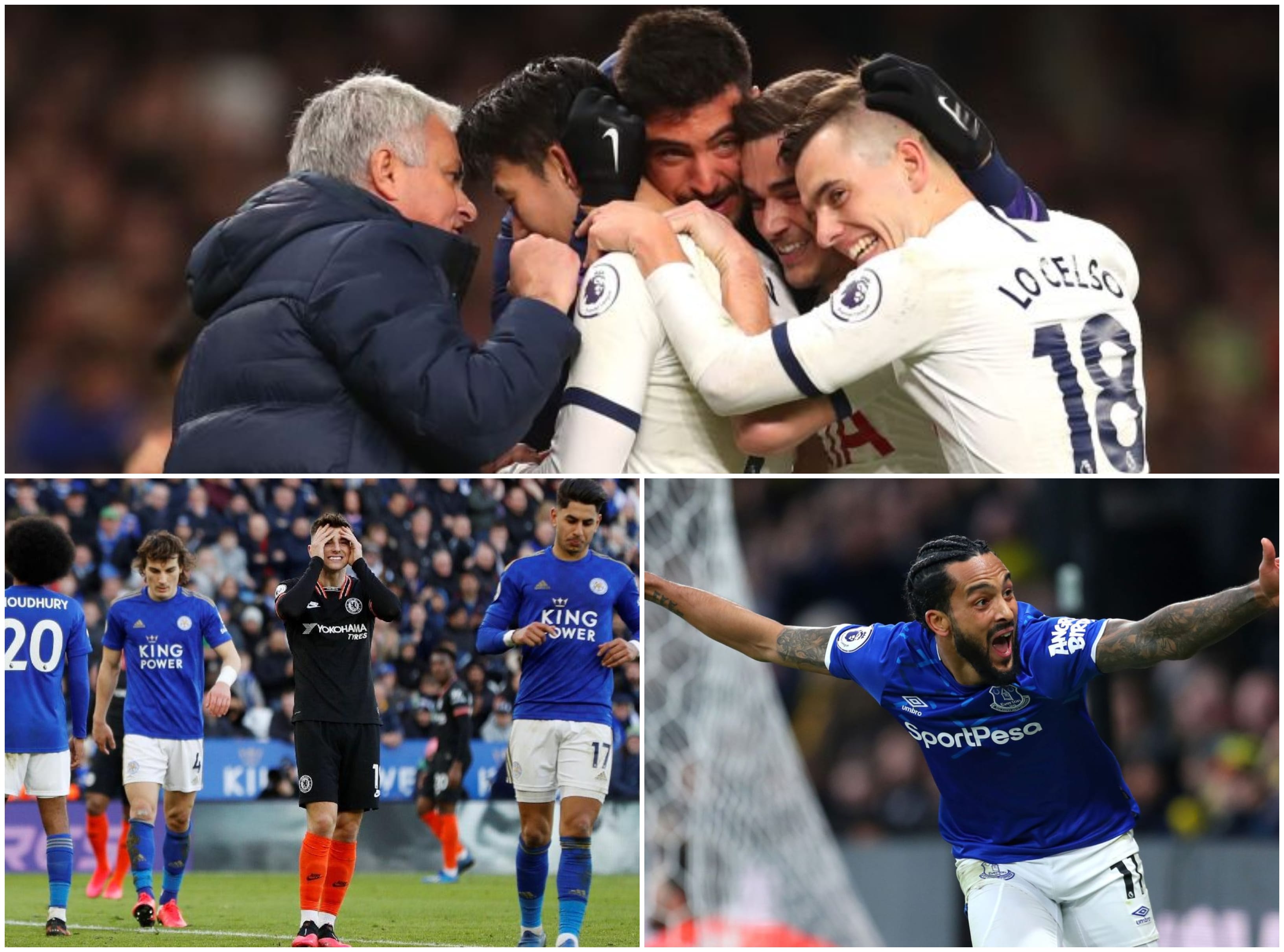 What a weekend! Thank you, Premier League, for gifting us with epic comebacks, saved penalties, late drama, red cards and much, much more.

For lack of better words: this was a crazy, crazy game! Manchester City lost by two goals to Tottenham in London (almost the opposite to our prediction!), a result which lifted Jose Mourinho’s men to fifth spot, four points behind fourth-placed Chelsea, while City remain in second.

The first half offered moments of brilliance in a see-saw game mostly dominated by Pep Guardiola’s squad. Hugo Lloris saved a penalty from Ilkay Gundogan, and as if that wasn’t dramatic enough, Raheem Sterling went down in the box right after Lloris’ save. VAR said No Penalty or red card, which added more fuel to Spurs’ flame.

But when in minute 61 Oleksandr Zinchenko was sent off because of a second yellow (and football karma), Tottenham grasped the chance to produce the wildest of turnarounds.

Spurs new signing Steven Bergwijn scored a stunning, breakthrough goal in what was their first shot on target. Shortly after Son Heung-min secured the scoreline with a shot deflected on its way past Ederson – a lucky goal if we’ve ever seen one.

With a massive smirk on his face, Jose Mourinho said: “It’s a pleasure to get three points in a match where we knew it would be very difficult. I have better feelings for Pep than you can imagine. We worked together for three years.”

6 – Manchester City have now lost six games in the Premier League this season; their joint-most in a single campaign under manager Pep Guardiola (six in 2016-17). Earth. #TOTMCI pic.twitter.com/tnKSIlkSZU

Leicester hosted Chelsea for a thrilling Premier League draw at King Power Stadium this Saturday. Following a largely uneventful first half, the tempo picked up when Antonio Rudiger’s header put Chelsea ahead in the 46th minute.

His goal was canceled by Harvey Barnes (and a huge deflection off Reece James) just eight minutes later. Ben Chilwell netted a Youri Tielemans cross into the bottom left corner in minute 64 and Brendan Rodgers was looking towards his first win as manager over Chelsea in his 14th attempt.

“We had the better chances to have won the game. It was just unfortunate.” – Brendan Rodgers 🗯 #lcfc • #LeiChe • #PL

6 – This was the sixth Premier League game this season that Chelsea failed to win despite scoring the first goal (D5 L1) – only West Ham (7) have failed to win more in which they’ve opened the scoring this term. Pegged. #LEICHE pic.twitter.com/VgsD5DlrJq

But Blues’ man of the match wasn’t having any of it. Rudiger’s second header of the day gave Frank Lampard’s side with a hard-earned point. The Germany international became the first defender to score a brace in a Premier League match for Chelsea since John Terry in April 2013.

This result leaves Leicester in third place on the table, eight points above fourth-placed Chelsea.

Sometimes we just feel lucky to witness football magic and this game was one of those times. A truly unbelievable comeback saw ten-man Everton overcome Watford at Vicarage Road this Saturday.

Carlo Ancelotti’s men fought back from two goals down to beat Watford in their own arena despite having Fabian Delph sent-off with a second yellow with 20 minutes to go.

What a first half though!? Adam Masina put Watford ahead 10 minutes in and Roberto Pereyra gave them a two-goal lead with an absolute belter and our personal Goal of the Weekend. Three minutes later Everton’s Yerry Mina scored twice, in one minute (45+1′ and 45+4′). We can’t even…

2 – Yerry Mina is the first defender to score a Premier League brace for Everton since Leighton Baines against West Ham in September 2013. Quickfire. #WATEVE pic.twitter.com/hKDCjeB7Ex

The second half offered bursts of greatness but nobody managed to find the back of the net until Theo Walcott grabbed a late winner in the last minute of stoppage time. The scenes after his goal give us all the feels.

Shoutout to determined Burnley for drawing against Arsenal in a goalless match at Turf Moor.

Everton weren’t the only ones with a remarkable comeback this weekend! Give it up for Brighton who came from three goals down to level with West Ham in London.

Another respectful bow to Wolves, who held off Manchester United at Old Trafford in a fairly equal-leveled match that ended in a goalless draw. We said hello to the United newcomer, Bruno Fernandes, who made a memorable Manchester United debut. The skills on that guy!

🤩 You’ve seen #BrunoFernandes in an #MUFC shirt, and now you can get kitted out like our new man in midfield! 1️⃣8️⃣

Special applaud to Bournemouth, who picked up a massive 2-1 victory over fellow relegation strugglers Aston Villa, even though they were playing with ten men from just after half-time.

And of course, what is a Premier League round-up if we don’t mention table toppers and ahem, 2019/20 Champions, Liverpool? Goals from Alex Oxlade-Chamberlain, Jordan Henderson, and a Mohamed Salah double thrashed Southampton 4-0 at Anfield.

Liverpool end the weekend 22 points clear of second-placed Manchester City, this is the biggest lead any table-topper has ever had at the end of a day in Premier League history.

See you next weekend for more Premier League action! Make sure to bet with 22Bet!