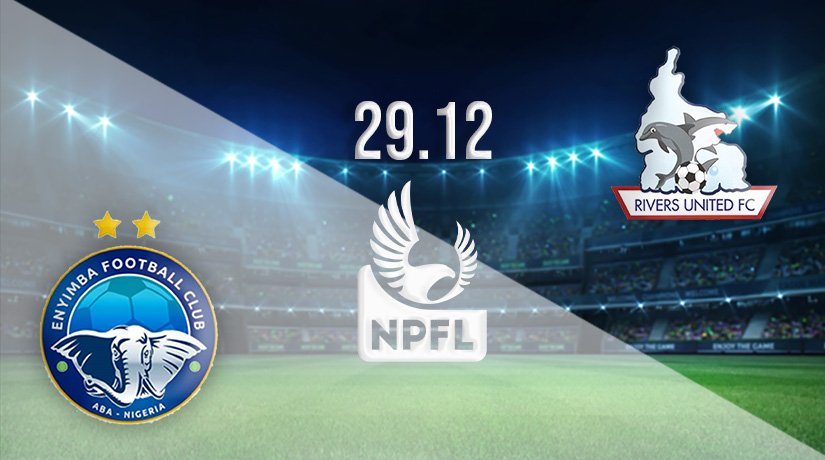 Fresh from the narrow 1-0 win at Enugu Rangers on Boxing Day, Enyimba will be seeking to make it three wins out of three this season when they host Rivers United on Wednesday at 16:00 GMT.

Can Enyimba Make Three Out of Three?

Having won their first two fixtures of the NPFL season, Enyimba will be looking to make maintain their 100% record against Rivers United, as they start their fight for the league title in earnest.

However, the two first wins have been narrow and laboured somewhat. The first was a 2-1 against Abia Warriors, who finished 14th on the NPFL table last season, and the second was a narrow 1-0 victory over Enugu Rangers.

Finidi George will be looking to enhance his side’s play to ensure that they are more convincing as they gain confidence in the league.

Can Rivers United Maintain their Unbeaten Start to the Season?

Rivers United have had a promising start to the season with a draw and a win, which gives them 4 points and a 4th position on the table, level on points with defending champions Akwa United.

Fatai Osho will be looking to maintain his side’s start to the season when they travel to face Enyimba.

Rivers United will be looking to make a major statement by climbing a significant scalp in the NPFL in the form of Enyimba.

Finidi George’s side have won their last 5 competitive matches. In the CAF Confederation Cup, Enyimba are in good stead to qualify to the next stage after defeating Diambers 4-0 over two legs and holding a 2-0 advantage of Al-Ittihad from the first leg.

In the NPFL, Enyimba have won their first two matches, scoring three goals and conceding one. They have collected 6 points, and are second on the NPFL table courtesy of goal difference.

Rivers were eliminated by Egypt’s Al Masry from the CAF Confederations Cup on away goals after the match ended 2-2 on aggregate. In the first leg, Rivers beat the Egyptian club 2-1, with Al Masry winning the return leg 1-0.

In the NPFL, Fatai Osho’s side have started with a 1-1 draw with Lobi Stars and a convincing 3-0 win over Katsina United last Sunday.

Finidi George has his full complement available for selection ahead of the clash against Rivers United. This will be a boost as Enyimba look to continue their impressive start to the season.

Fitness is also crucial given the impending second leg of the CAF Confederations clash with Al-Ittihad, which was postponed because of coronavirus issues.

Finidi George will look to choose his strongest side on Wednesday to maintain momentum and maintain their 100% start to the season.

Fatai Osho’s side has not reported any injuries from the first two fixtures of the season in the NPFL, and their CAF Confederations Cup exertions.

This means that the manager will have the full squad to choose from, which will give him the flexibility and advantage of tailoring the team to face the tough examination that will be presented by Enyimba.

Enyimba need to step up their style of play to get more goals. Victor Mbaoma will play a central role in driving this improvement for Finidi George’s side.

Mbaoma already has 3 goals in the CAF Confederations Cup competition, and he notched the winning goal against Enugu Rangers on Boxing Day.

The Nigerian striker will be crucial for Enyimba in the match against Rivers United, and the rest of the season as they fight to win the NPFL championship.

Rafiu will play a central role in the Rivers United attack in the match against Enyimba.

Finidi George’s side are built to be solid and give very few chances away. It is, therefore, important for Rivers United’s attacking approach to be sharp and penetrative.

Rafiu will play a starring role for Rivers United as they seek to upset Enyimba and end their 100% start to the season.

Make sure to bet on Enyimba vs Rivers United  with 22Bet!