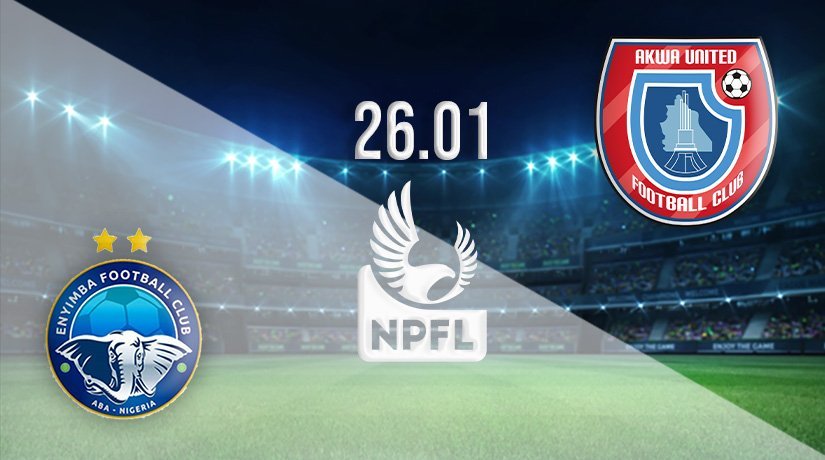 Enyimba host defending champions Akwa United on Wednesday at 16:00 GMT as both teams seek to re-launch their title challenges that are at risk of being extinguished early on.

Enyimba and Akwa United need to get their respective season back on track after a stop-start start in their first 7 matches.

This match is a must-win for both teams if they are to resurrect any hopes of fighting for the title.

Enyimba have been disappointing so far this season. They were expected to fight for the title this term, but instead, they are have won 3 out of their last 7 rounds of fixtures.

In this run, they have lost 3 and drawn one, which leaves them with 10 points and 11th on the NPFL table.

The defending champions have got on a nightmare start to the season having only won 3, lost 2, and drawn 3 matches from their 7 rounds of fixtures this term.

Akwa are 8th on the table, 6 points behind league leaders Remo Starts.

The two-time African champions Enyimba will be without goalkeeper John Noble, who was called up to the Africa Cup of Nations squad for Nigeria.

Although Nigeria were knocked out of the AFCON tournament by Tunisia on Sunday, the Wednesday match will come too soon for Noble to re-join Enyimba.

Enyimba will have the rest of the squad available for selection in the match against Akwa United.

The Akwa camp reports that their key players are fit and available for the clash against Enyimba.

This will come as a boost for Akwa as they seek to take all 3 points and boost their bid to climb the table.

Mbaoma is a crucial striking outlet upfront for Enyimba. Even as the team has struggled to assert itself in this season’s NPFL league, Mbaoma has been a crucial bright spot for the team.

The striker will be crucial for Enyimba as they take on Akwa United hoping to bounce back from the 1-0 defeat to Lobi Stars.

Friday’s pace and creative play down the wing will be crucial for Akwa United as they come up against a reeling Enyimba.

Both Akwa United and Enyimba have struggled to stamp their authority in the NPFL this season; however, Ubong Friday offers Akwa a potent weapon to use against Enyimba as Akwa seek to create some climb up the table.

Both Enyimba and Akwa United are short on confidence and form. They will approach this match with pragmatism, and an attitude of not wanting to lose.

As a result, the fixture will be a cagey affair with both teams being solid and compact.

Both teams will hope for moments of individual brilliance to make the difference and hand them the much-needed 3 points.

Given this approach, a draw is the most favoured result in this match, which will not help either team to re-launch their seasons and chance the leading pack on the NPFL table.

Make sure to bet on Enyimba vs Akwa United  with 22Bet!