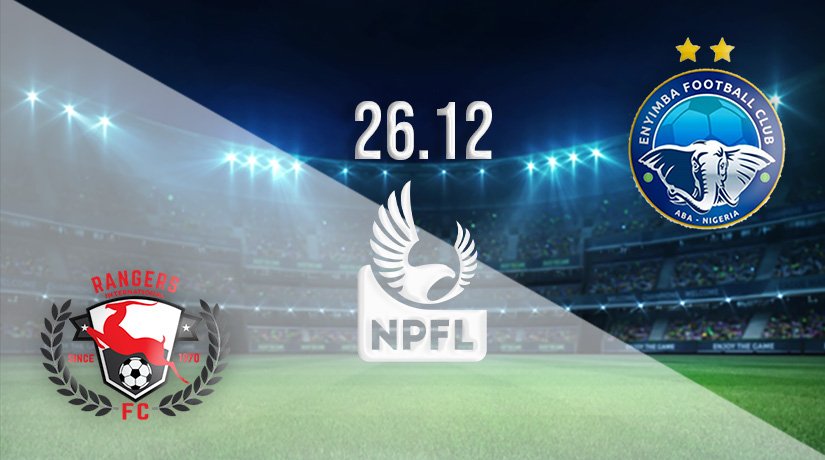 Enyimba, last season’s runners-up in the Nigerian Professional Football League, continue their 2021-2022 campaign when they travel to face Enugu Rangers on Sunday 26th at 16:00 GMT.

Last season (2020-21), only four points and five places separated Enyimba (2nd on the table with 66 points) and Enugu Rangers (7th on the table with 62 points). This means that the match is likely to be closely and fiercely contested.

Can Enyimba go One Better in the League this Season?

Enyimba missed out on the title by five points last season, as Akwa United were crowned champions with 71 points. Finidi George’s men will mean to go one better this season and win the title.

But first Enyimba will have to contend with an Enugu Rangers side that are very competitive and that will be looking to mount a title charge of their own this season.

Enyimba have shown fantastic form in the CAF Confederation Cup by winning three straight matches against Diambars (4-0) on aggregate and against Al-Ittihad (2-0) on the first leg.

Going into the start of the Nigerian Professional Football League season, Enyimba look to be in good form.

Can Enugu Rangers Make the Home Advantage Work for them against Enyimba?

Salisu Yusuf’s side are nicely poised to kick on from their impressive showing last season. The ambition of the gaffer and the supporters will be to challenge for the title and disrupt the top two of Akwa United and Enyimba.

There is not a better match to make a statement in the league-opener than the storied Enyimba at home.

Salisu Yusuf will have to prepare his players’ match fitness well to face an Enyimba side that have been in action in the CAF competition, and therefore, have their sharpness in advanced levels.

Salisu Yusuf’s side finished last season strongly with three wins, one draw, and one defeat in their last five rounds of fixtures. The only defeat in this sequence was a 3-0 reverse at the hands of Nasarawa United.

Enugu Rangers will be looking for consistency this season to enhance their upward trajectory and keep their title hopes long into the season.

Playing Enyimba in their second match of their NPFL campaign, and their first in front of the home fans, will be a good opportunity to lay down a marker for the rest of the season.

Enyimba beat the Senegalese side Diambars 4-0 on aggregate in the CAF Confederation Cup’s second preliminary round. Finidi George’s side won the away match 1-0 in Senegal before winning the home match 3-0 in Nigeria.

In the play-off, Enyimba beat the Egyptian side Al-Ittihad 2-0 in the home leg in Nigeria, with the second led scheduled to take place in Egypt.

The Flying Antelopes do not have any players injured as the NPFL season kicks off in earnest.

Salisu Yusuf has the full complement of his squad to choose from for the mega clash with Enyimba on Sunday.

Finidi George does not have any injuries to concern himself with ahead of the match against Enugu Rangers on Sunday.

With Enyimba at full strength, George will be bullish ahead of the match and will back his team to do well and start their season away from home underway in some style.

Nnaji was a crucial part of Enugu Rangers’ season last season. The 19-year-old prodigious striker provides the goal threat and penetration Enugu need to score goals and break down opponents.

Nnaji will be crucial in the match against Enyimba in the Nnamdi Azikiwe Stadium in Enugu.

Kalu has been instrumental in Enyimba’s run in the CAF Confederation Cup through his goals.

He will be instrumental in Enyimba’s quest to take three points from Enugu.

Enyimba have been in the thick of the continental tournament, which gives them the sharpness edge over Enugu Rangers. On the other hand, Enugu will be playing at home, where they beat Enyimba 2-0 in the corresponding fixture last season. But Enyimba will have the quality and sharpness needed to win the match and take all three points.

Make sure to bet on Enugu Rangers vs Enyimba with 22Bet!