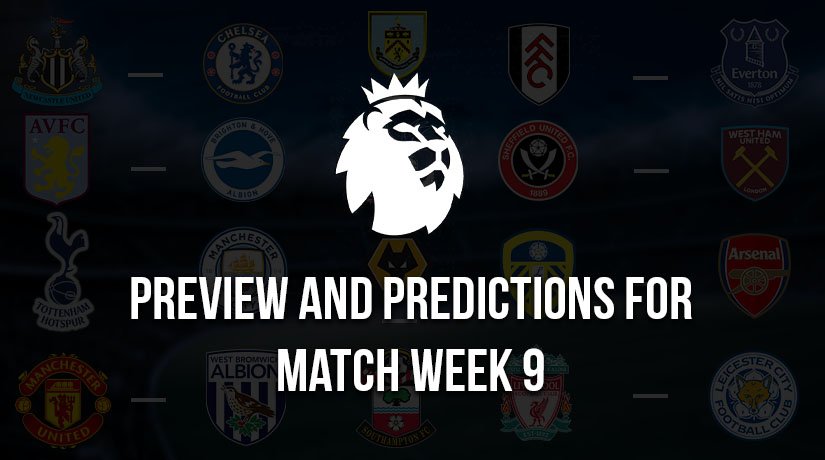 Welcome to our English Premier League predictions for Saturday. It’s matchday nine of the English Premier League season and there’s plenty for football fans to get excited about. The most popular football league in the world returns following the international break and it’s back with a bang as Newcastle United and Chelsea meet at St James’ Park from 12.30.

The hosts can be found treading water in the bottom half of the table with their stats showing three wins and two draws against three defeats. The Magpies have taken only four of the last dozen points up for grabs and suffered defeat last time out. Chelsea are fifth in the table, just one point behind Southampton and a place in the top-four. The Blues are on an unbeaten run, winning each of their last two league starts. They’ll be eager to land the treble. Follow our English Premier League predictions for Saturday below.

Bet on Newcastle vs Chelsea HERE!

Aston Villa enjoy the home advantage at Villa Park for the only 3.00pm Saturday kick-off on Saturday from the top flight of English football. The locals started the season brightly, but back-to-back defeats saw them drop out of the top-four. Villa did pick-up a crucial win before the break and will believe they are good enough to build on that against a Seagulls side that has won just one game this season, drawing three and losing four. 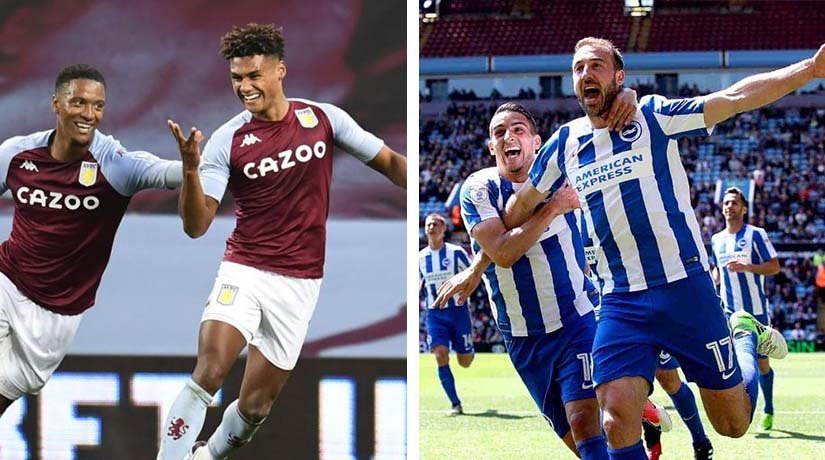 The star attraction from Saturday’s Premier League fixtures and one of the biggest games of this weekend in European football takes place in London where title challengers Tottenham Hotspur and Manchester City dispute three important points. Spurs enter on a fantastic run of form and have lost just once in their first eight games, picking up 17 points. The hosts are second in the table behind Leicester City who are a point better off at present.

Manchester City haven’t made the strong start fans had hoped for and are down in 10th place but do have a game in hand over most other teams in the division after sitting out week one. The Cityzens have won three, drawn three and lost one so far, scoring 10 goals but conceding nine. A victory in London would help drive them towards the prize places.

Next on the PL schedule this week, Champions League side Manchester United return to Old Trafford and the pressure is on to secure three points against an opponent who look likely to spend this campaign fighting against relegation. It has proven to be another poor start for the Red Devils, and they’ve won only two of their last five games. Solskjaer and his players are already beginning to feel the strain, but a convincing win and eye-catching performance would help set them on the road to recovery.

Click here to bet on Man Utd vs West Brom. 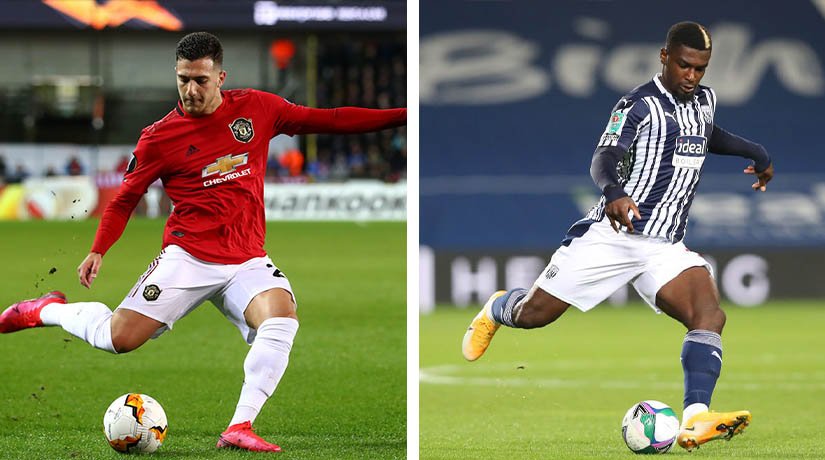 Four games are scheduled to be played in the Premier League on Sunday and the show begins in London where Fulham host Everton at Craven Cottage from noon. The locals were promoted from the Championship through the playoffs last season but have struggled to cope at the higher level, winning only one of their first eight games and losing before the international break.

Everton exploded out of the traps and were the most impressive team in the early exchanges, rocketing into pole position thanks to an unbeaten run. They dropped two points when drawing with Liverpool in the Merseyside Derby and have struggled since, losing their three games since. The Toffees are now seventh in the table, but an away win would push them back into the race for a top-four finish and Champions League football for next season.

Bet on Fulham vs Everton HERE!

Bramall Lane provides the backdrop as struggling Sheffield United attempt to haul themselves off the bottom of the Premier League with what would be their first win of the season. The home team have played eight, lost seven and drawn the spare, conceding 14 goals in the process. Opponents West Ham have been playing well and have lost just one of their last five, banking victory before the international break. The Londoners will make themselves favourites to add another three points.

Click here to bet on Sheff Utd vs West Ham. 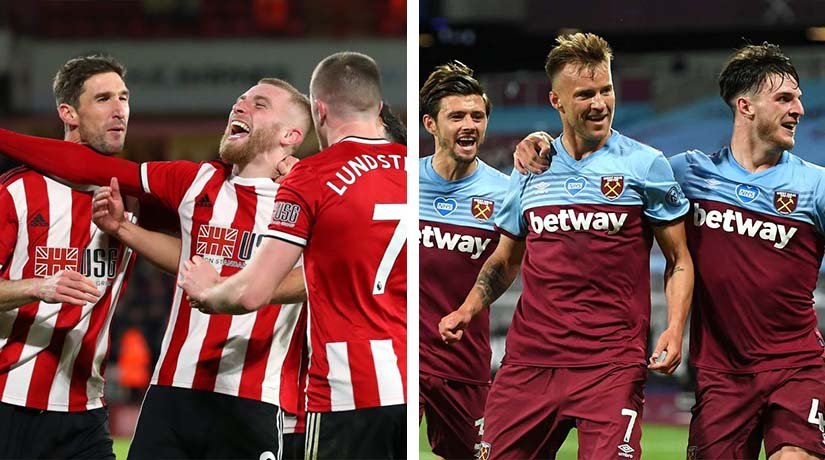 Armchair fans are in for a treat from Elland Road as Leeds United host Arsenal live on TV. The home team have been scoring for fun since their promotion as winners of the Championship and have already proven themselves worthy of a place in the top tier of English football. Leeds set-up for this match having won three and drawn one of their first eight, scoring 14 goals. The locals have lost each of their last two league games, however.

Arsenal fans want to see a big season from their team as they demand the Gunners fire themselves back into the top-four and return Champions League football to the Emirates Stadium. Mikel Arteta’s men are down in 11th place, however, having lost three of their last four games and the critics are circling. Lose again here and Arteta will know his job is on the line.

Bet on Leeds vs Arsenal HERE!

Next from our match previews and what a game we have in store at Anfield as last season’s champions take on this campaign’s league leaders. Liverpool topped the Premier League predictions 2019/20 and will be popular again. The Reds have begun their defence in style, winning five, drawing two and losing one of their games, scoring 18 goals but conceding 16. They have 17 points on the board which places them level with Tottenham in second but know a home win would move them back to the head of the division as we enter a busy period of the season.

Leicester City impressed for most of last season before falling off the pace in the closing stages. PL results show they have opened this campaign in style and are top of the league with 18 points on the board, despite losing two of their first eight, winning the other six outings. The Foxes have won each of their last three games and head to Merseyside with confidence in the camp. The home win will be popular. Betting tips and EPL expert predictions are as follows.

Prediction for Liverpool vs Leicester HERE. 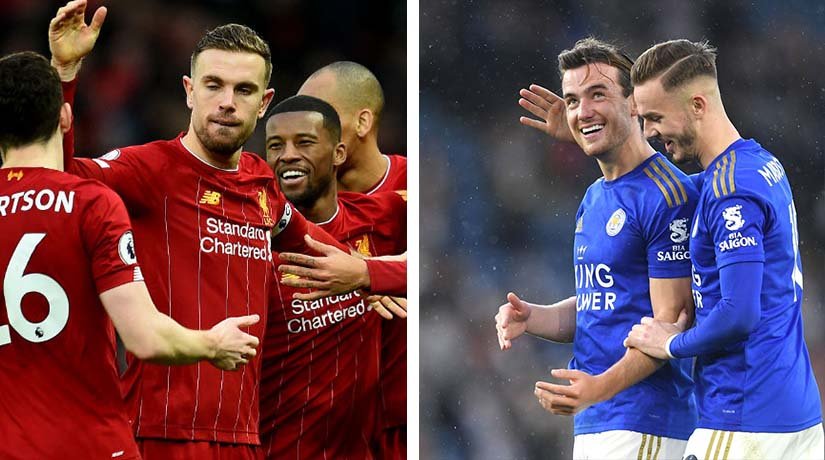 The first of two Premier League games on Monday and we’re at Turf Moor for Burnley vs Crystal Palace. The home team are second from bottom of the list without a win on the board, losing five of their first seven and conceding a dozen goals. Palace arrive in town eighth in the league and confident following two wins in their last three games. The London side could ramp up the pressure on the prize places with an away win. Football predictions and betting tips below.

Click here to bet on Burnley vs Crystal Palace.

Last in our Premier League predictions. Wolves have lost only one of their last five league games, but the spare did come in their most recent start. Everyone connected to the club would love to see them bounce back to winning ways at the first time of asking as they aim to score another Europa League finish this term. To get the win Wolves must beat a Saints side who are going great guns, winning 16 points to sit fourth in the table and hot on the heels of leaders Leicester City. Southampton have won their last three Premier League games and are good enough to make it four here. Follow our Premier League predictions and Premier League odds below.

Bet on Wolves vs Southampton HERE!