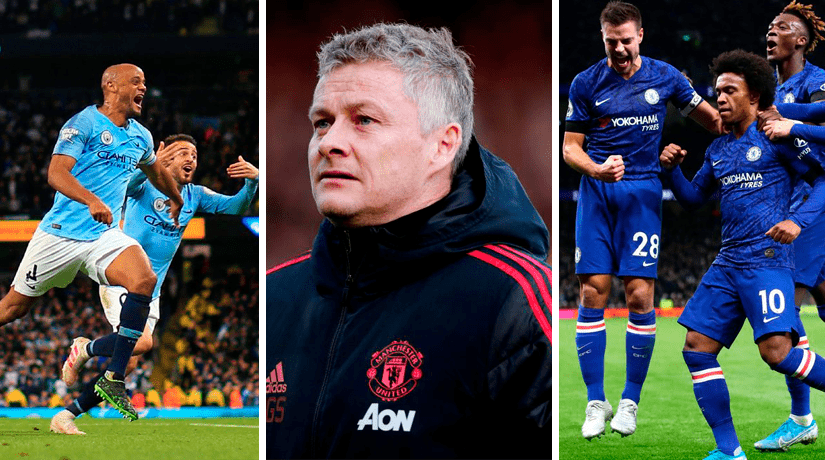 It’s the last matchday before Christmas and in the true holiday spirit, the Premier League gifted us with some riveting fixtures.

Pep Guardiola’s men came back from behind to earn a vital victory on home turf and keep their slim chances for Premier League glory alive.

1⃣7⃣ goals and counting this season for @vardy7 🔥

Second-place Leicester turned up determined for a game against Manchester City, aka Kevin de Bruyne et al. Jamie Vardy netted his 17th league goal of the season in the 22nd minute to give Leicester City the lead. The reigning Champions were quick to respond as Riyad Mahred scored the equalizer against his old club on the counter-attack eight minutes later and Ilkay Gundogan converted a penalty to put City ahead just before half-time.

The second half was dominated by this clash’s (entire League’s?) star player, Kevin de Bruyne. The Belgium international produced yet another magnificently unstoppable run ending in his 13th assist of the season.

“Kevin De Bruyne is a fighter and he helps us keep up the intensity when he’s playing further up he helps the press a lot,” Guardiola said after the game. “That was the best he has played in a long time.”

Rock bottom of the table side, Watford humiliated Manchester United thanks to two second-half goals in quick succession at Vicarage Road.

If Watford were great, then United were equally terrible.

An epic fail by David de Gea handed Watford’s Ismaila Sarr the lead just after half-time, moments before Troy Deeney netted in a penalty for their second. The Manchester United keeper recorded a cringey stat as he became the Premier League goalie with most errors since the start of last season (6).

We know that we are merely two games into Nigel Pearson’s overtake at Watford, but could this victory give the Hornets the boost they need to save themselves from relegation this season?

“A frustrating afternoon” is an understatement if we’ve ever heard one.

And since we’re on the subject of frustration, Everton hosted Arsenal for a goalless, low-quality match at Goodison Park.

Less than 24hrs after being appointed as managers, Carlo Ancelotti and Mikel Arteta watched from the stands as Everton and Arsenal did nothing to impress their new bosses.

The Gunners showed up with their youngest Premier League XI since May 2011 and became the first ever league club to play with two starters born after 2000.

In a game of few chances, Gylfi Sigurdsson’s free-kick into the side net was the best either team could muster up in the first half. Arsenal couldn’t even produce a single shot until the 44th minute.

Jordan Pickford had an excellent game as he was tested by Pierre-Emerick Aubameyang a few times, one shot resulted in a tame effort (if we can even call it that) into the hands of Everton keeper.

Both new managers have their work cut out for them and January 2020 can’t come soon enough.

44 – Gabriel Martinelli’s effort in the 44th minute was Arsenal’s first shot in this match, their longest wait for a first attempt in a Premier League game since May 2015 against Man Utd (51st minute). Squib. pic.twitter.com/QGyzQqh1sa

Short of luck – but not short of fight. Tough one to take. 💙 • • • #everton #efc #blues #toffees #coyb #goodisonpark #carabaocup

From big reunions to red cards and penalties, Sunday’s London derby had a lot going for it.

Jose Mourinho hosted former player Frank Lampard and his Chelsea squad at the Tottenham Hotspur Stadium and the two arch-rival clubs fought a feisty derby that we are all very grateful for. Star of the show, Willian netted a curled stunner followed by a penalty to hand Chelsea three points against 10-man Spurs.

Tottenham keeper, Paulo Gazzaniga awarded Chelsea with a penalty after his utterly shambolic error in trying to clear the ball with the back of his boot, only to miss it completely and almost take out Marcos Alonso in the process.

Heung-min Son saw a red for violent conduct after needlessly kicking at Antonio Rudiger forcing  Spurs to play with ten men from the 62nd minute onwards.

1 – José Mourinho suffered his first ever home defeat against a team he had previously managed, having gone unbeaten in the previous 13 across all competitions (W12 D1). Melancholy. pic.twitter.com/zsh7wgINWM

Frank Lampard’s celebration after the final whistle attests to how important this victory is to him and his team.

Aston Villa vs Southampton (1-3) for a four-goal thriller featuring a spectacular double by Danny Ings, taking the Saints out of relegation zone ahead of Boxing Day.

Can’t. Stop. Scoring. 🔥 @ingstagram10 takes his tally to 1️⃣3️⃣ for the season!

And Brighton & Hove Albion vs Sheffield United (0-1) and particularly Oliver McBernie for smashing home that superb strike in the first half.

Dear Premier League, have a Merry Christmas. See you on Boxing Day!