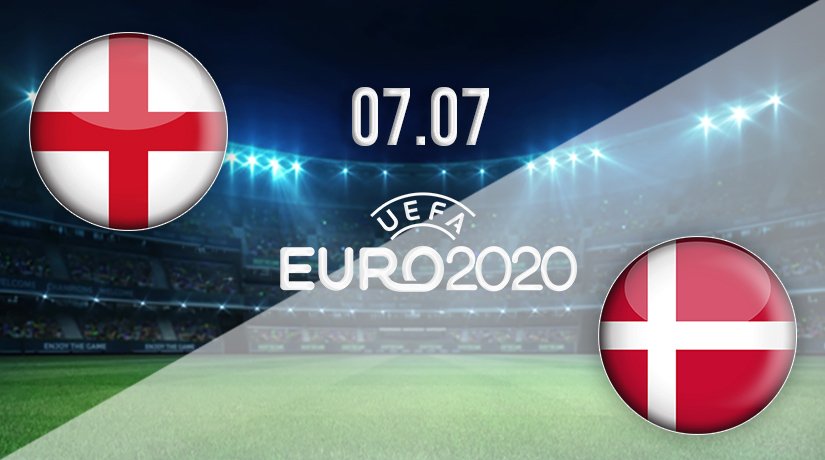 The second Euro 2020 semi-final will be played at 20:00 GMT on Wednesday at Wembley Stadium in London. England takes on Denmark for a place in the final, and with extra time and penalties available, if required, this match will produce a winner and a loser. Which nation will grab their place in the final and take a step closer to being crowned champions of Europe? Wembley Stadium will be packed, and the game will also be shown live on TV to a global audience.

This may be advertised as a neutral venue, but Wembley hosts both semi-finals and the final, meaning England will have the home advantage. They will also enjoy the lion’s share of the support on Wednesday, and the players will hope to take advantage of that. The Danes will be out to silence the crowd by frustrating their opponents and punishing any mistakes made as nerves begin to creep in. This game has all the ingredients of a classic.

The history books show England and Denmark have met 17 times in the past, with England holding a dozen victories against the four of Denmark with five games ending in a draw. The most recent clash came in Nations League action last year, producing a narrow 1-0 win for Denmark at Wembley. Christian Eriksen scored the only goal of that match but won’t play in this renewal. That means we have to go back to 2014 for England’s last victory over Denmark. Will that wait continue?

England started Euro 2020 as second-favorites behind France to win Euro 2020, and they have certainly lived up to that billing so far. The top three teams in the betting pre-tournament were France, England and Belgium, but the Three Lions have out-lasted the other two nations in that list. Will they go all the way and lift the European Championship trophy for the first time in their history? To have any chance of achieving that, they must defeat an ambitious and organised Danish side.

England hit the ground running at Euro 2020 and came through their group as winners and with an unbeaten record. They claimed seven of the nine points that were available to them in the pool, beating Croatia and the Czech Republic 1-0 while drawing 0-0 with Scotland. The Three Lions then progressed to beat Germany 2-0 in the Round of 16, with goals coming from Sterling and Kane. The latter finally got off the mark, scoring his first goal of the competition when it mattered most.

In the quarter-finals, England had no hassle blowing away Ukraine to make the semis. And they did it in style. Gareth Southgate’s men swaggered to a 4-0 victory thanks to strikes from Maguire, Henderson and a Kane double. The Tottenham striker was favourite for the Golden Boot pre-tournament and has finally found his shooting boots. Three goals in two games mean he’s back in the mix, and fans will want to see him continue his form in midweek.

Danes fly under the radar

Many pundits didn’t pick out Denmark as a team that would still be fighting in the semi-finals, but they are here on merit. England may be the home team with the support behind them, but Denmark understands that places all the pressure on their opponents. The visitors have flown under the radar so far and will prepare for this game free from the spotlight. It’s the England players who train under the burden of expectation. That’s a real positive for the squad.

Denmark finished second in Group B behind Belgium. They posted stats of one win against two defeats, scoring five goals and conceding four. That is less than impressive as the three points gained was one of the lowest of the qualifying teams, and they finished ahead of Finland on goal difference. Excuses can be made for that slow start to the group as they lost 1-0 to Finland in that opening match that was blighted by the Erikssen incident.

Since progressing from the group, Denmark has found their feet and improved with the passing of each match. They hammered Wales 4-0 in the Round of 16, then edged the Czech Republic 2-1 in the quarter-finals. Goals from Delaney and Dolberg saw the victors race into a 2-0 lead that day, and despite Schick firing back early in the second half, Denmark was able to hold onto their advantage.

England and Denmark were slow starters in this competition but have both been impressive in the knockout stages. England has yet to concede a goal, and that will provide a major boost to team morale. They are at Wembley, which is another positive with the fans behind them, cheering on the Three Lions.

A support can work in a team’s favour, but those inside Wembley won’t be slow in voicing their disapproval if things aren’t going according to plan. If Denmark can make things scrappy, keep the scores competitive for as long as possible and aim to hurt their opponents with corners and free kicks, the natives will become restless. The duller this match is, the better for Denmark.

The past meetings of these teams tell us this will be competitive. There has been no more than one goal between the pair in each of the last four meetings, with at least one team failing to find the net in each of the last three. With England’s defensive record at Euro 2020, we could see another low-scoring match.

The pre-match betting available at 22Bet for this game has England priced at odds of 1.705 for the win, with Denmark trading at 5.3 and the draw 3.56.

As well as the match betting market, members of 22Bet will also find over 100 options to gamble. These include the first goalscorer, both teams to score and correct score.

Visit the site later this week for our in-depth look at the Euro 2020 final that will be played on Sunday ahead of the Copa America final, which we also plan to preview.

Want to wager on other betting markets, such as BTTS, Handicap or Total Score? Make sure to bet on England v Denmark with 22Bet!