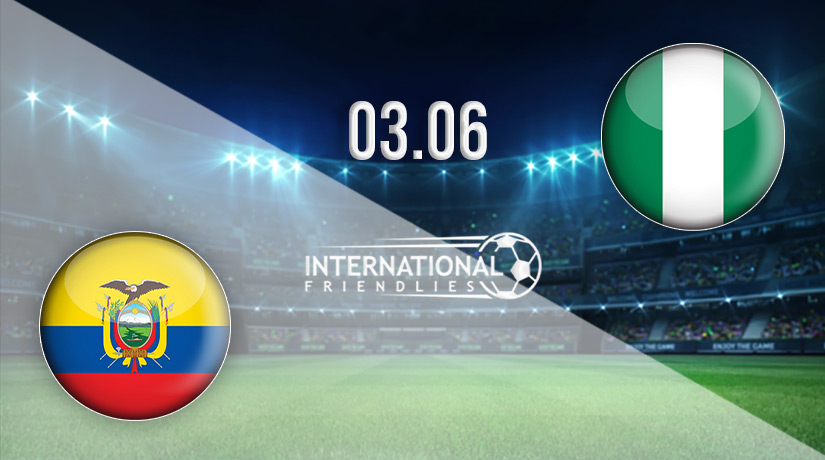 Ecuador will continue their preparation for their World Cup opener against Qatar in November with a friendly clash with African giants Nigeria at the Red Bull Arena on Friday starting at 01:30GMT

Can Ecuador Continue their World Cup Preparations with a Win over Nigeria?

Ecuador will be looking to step up their preparation for the World Cup in the friendly clash against Nigeria on Friday.

Gustavo Alfaro will be looking to fine-tune his tactics, and perception of his squad, and allow the players to be well-versed with competitive situations ahead of the World Cup in Qatar.

Alfaro will also look to ensure that players plying their trade in Europe and other far-flung areas can gel with some of the home-based ones to create a robust unit capable of winning matches ahead of their opener against the hosts Qatar in November.

Can Nigeria Bounce Back from the Friendly Loss to Mexico with a Win over Ecuador?

After the Super Eagles lost 2-1 in a friendly clash with Mexico last week, Gernot Rohr will be looking for an immediate response from his squad when they take on Ecuador on Friday in their second friendly.

As Nigeria nurse their failure to progress deeper into the Africa Cup of Nations, and inability to make it to the World Cup in Qatar, Gernot Rohr will look to build the self-confidence and trust within the squad to bring out the best performances from the team.

This process will be tested on Friday when they take on Ecuador, who qualified for the World Cup and are using these friendlies to prepare for their opener against the hosts Qatar in November.

Nigeria’s focus will be on keeping clean sheets, which was exposed against Mexico last week, to bolster their chances of winning against Ecuador.

Despite these losses in their qualifying campaign, Ecuador qualified for Qatar 2022, which underscores their current preparative path including the clash with Nigeria on Friday.

In their last two matches leading up to the clash with the Super Eagles, Ecuador have drawn one against Argentina (1-1) and lost the other 3-1 against Paraguay. Gustavo Alfaro will use the clash against Nigeria to bolster Ecuador’s form and the performances of his players.

The Super Eagles have won six, drawn twice, and lost twice in their last ten outings in international football.

The two defeats in this run came in the 2-1 defeat to Mexico in a friendly last week and the 1-0 loss to the Carthage Eagles of Tunisia in the African Cup of Nations round-of-16 that saw Nigeria bow out of the tournament in which they were favourites.

Despite the general good form enjoyed by the Super Eagles, Gernot Rohr will know that the Super Eagles failed when the pressure was on; for example, they failed to beat Ghana to make it to the World Cup, instead of being knocked out on away goals.

The striker, who plays for D.C. United in the Major League Soccer, is a crucial player for Ecuador for his pace, goal-scoring, and connection with other attacking players.

Estrada will be crucial for Ecuador as they seek to beat Nigeria on Friday in the friendly clash.

The Everton winger is a massive creative force for the Super Eagles. His pace, work ethic, and tireless running are important in shaping the attacking approaches adopted by Nigeria.

Iwobi will be crucial for Nigeria as they look to bounce back to winning ways against Ecuador.

Ecuador will seek to dominate possession through high-level pressing and controlling the tempo of the match.

Nigeria will seek to absorb the pressure and build their play patiently; they will also seek to use their pacey wide players to open up the play.

Ecuador are the favourites to win this friendly clash.

Make sure to bet on Ecuador vs Nigeria with 22Bet!