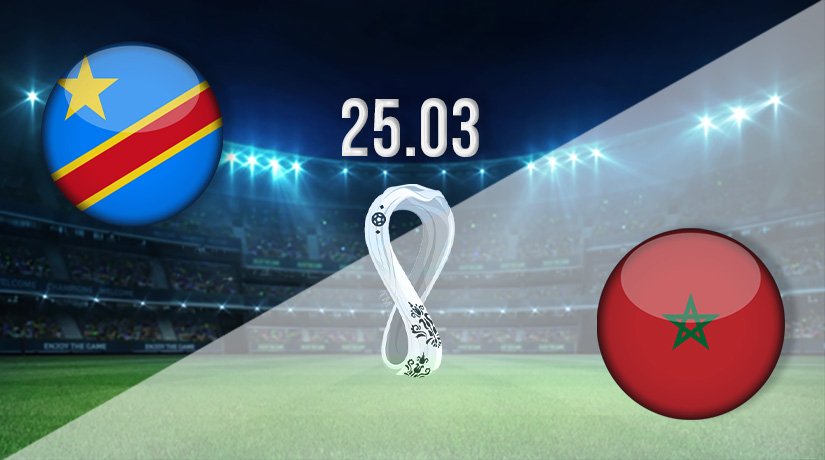 Africa Cup of Nations quarter-finalists Morocco travel to face DR Congo in the first leg of the third round of World Cup Qualifiers on Friday at 16:00GMT.

Can DR Congo Cause an Upset by Beating the Favourites Morocco and Advance their Chances of Qualifying for Qatar 2022?

DR Congo will be playing against the favorites on Friday; they will be taking on the Africa Cup of Nations quarter-finalists, while they did not make it to the continent’s showpiece event.

The central Africa side will have a chance to cause a major upset against the much-fancied Moroccan side, especially in the first leg held in DR Congo.

Can Morocco Take a Firm Step Towards Qualification for Qatar 2022?

Morocco will be the hot favorites to progress over the two legs at the expense of DR Congo. Most pundits argue that Morocco have the better squad with quality across the pitch.

However, they will have to be willing to work hard and dig deep to fight against a determined DR Congo, especially in the away leg. The focus will be to get a favorable result ahead of the second leg next week.

With qualification for The World Cup in Qatar in November, Vahid Halilhodžić will be looking forward to a disciplined and professional performance in DR Congo before finishing the job in Rabat next week.

Congo’s wins over the last six matches came at home against Madagascar (2-0) and away in Tanzania (3-0).

Morocco has won four times, lost once, and drew once in the last six rounds of fixtures. One of the losses came in their latest match, in which they lost 2-1 against Egypt in the Africa Cup of Nations quarter-final.

Dieumerci Mbokani is the DR Congo captain and a striker for Kuwait SC, playing in the Kuwait Premier League.

At 36 years, Mbokani offers experience and know-how for the national team when it comes to high-pressure moments.

As DR Congo have inched closer to qualifying for the World Cup, their opponents have got tougher. The clash with Morocco in the first leg of a World Cup Qualifier will be a high-pressure event; the experience and leadership of Mbokani, as well as his goal threat, will be needed.

He will be central to DR Congo’s approach of Friday both tactically and in terms of leadership when the team will be inevitably under pressure from the Moroccans.

The PSG full-back is ranked as one of the best in the world in his position. He possesses devastating pace, bundles of energy to get forward and back from his full-back position, and a goal threat to rival any full-back in the world.

Hakimi is central to Morocco’s approach from the wing-back or full-back position. He is solid defensively recovers well while also offering a pivotal goal threat going forward.

He will be crucial for Morocco on Friday as they try to break down a DR Congo side that will be pragmatic and defending with numbers around the box. Hakimi will be essential in breaking the two blocs of four behind the ball.

Expect DR Congo to be wary of the Moroccan attacking prowess; they will, therefore, adopt a pragmatic approach that will prioritize solidity over goal threat. DR Congo will ensure that they are still in the tie ahead of the second leg in Morocco.

The Central Africa side will look to use transitions to create chances and dangerous situations in the Moroccan defense.

Morocco will look to dominate the ball and build patiently from the back. They will press the ball and force DR Congo back into their defensive positions. This will give them the initiative and front foot advantage in the game.

With the current dynamics of the two teams, a draw is the most favored result in this match.

Make sure to bet on DR Congo vs Morocco with 22Bet!