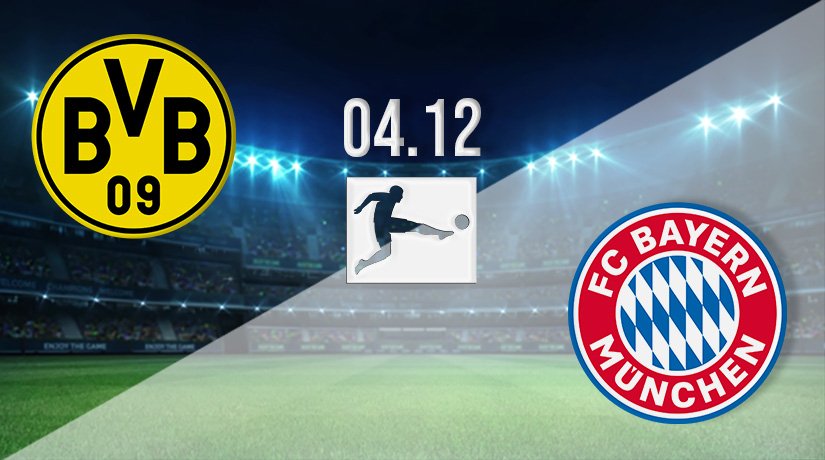 The opening weekend of December brings us a full card from the German Bundesliga, with Borussia Dortmund playing host to Bayern Munich in the main attraction. This match kicks off at 17:30 GMT on Saturday and will be played in front of a capacity crowd at the stadium, boosted by a huge global audience following the play live on television.

Those planning to watch the match hope both teams do their bit to ensure we have an enjoyable 90 minutes ahead of us with plenty of goals.

The fact this game involves two giants from German football, clubs we have become used to seeing compete in the Champions League, suggests we’ll get our wish for a competitive match. This fixture pairs the best two teams in the division at present, with Borussia Dortmund sitting second in the league, just one point off the pace set by Bayern Munich.

That means the winner of the points here will end the weekend in pole position. Dortmund have the chance to pass Munich while the visitors can open a four-point gap over the chasing pack with an away win.

The last time Borussia Dortmund and Bayern Munich met in competitive action, the game ended in a convincing 3-1 win for Munich. That result came in the German Super Cup back in August, with Lewandowski scoring a double and Muller netting the spare.

Dortmund were competitive that day despite failing to nail down the victory, and they scored through Reus in the second half to set up an exciting finish. The stats sheet shows us both teams have scored in each of the last four renewals of this fixture, with 20 goals scored in that period.

Dortmund enter as the form team

Borussia Dortmund have won each of their last two league games, making them the form team of the two involved here. The hosts have also picked up a dozen of the last 15 points that have been available to them and set-up for this match high on confidence.

The home fans that pack into the stadium and make their voices heard will be hoping to cheer Borussia Dortmund on to victory but are a knowledgeable bunch and understand wins over Bayern Munich don’t come cheap.

The locals recorded back to back wins in the league starting with a 2-1 at this venue when Stuttgart came calling last month. That was a tense contest and it was much closer than most pundits predicted it would be but Dortmund came through with the points and the victory thanks to goals from Malen and Reus.

They followed that Bundesliga win with a disappointing 3-1 defeat away to Sporting Lisbon in the Champions League and finished that game with 10 men after Can was sent off on 74 minutes.

A response was needed in the league and fans got it when Borussia bounced back to blow away Wolfsburg on their travels. They won the points that day thanks to a convincing 3-1 victory, the goals coming from Can, Malen and Haaland.

Football is a funny sport with Can sent off in Europe but responding with a goal next time out. Malen has scored in each of his team’s last three outings.

Bayern Munich’s lead is under threat

Bayern Munich have dominated football in Germany over the last decade and despite one or two close calls in that time, there have been no signs of them releasing their grip on the title. In France, PSG fell from top spot last season and in Italy we saw the Serie A title slip through the fingers of long-term champions Juventus.

Will the same fat strike FCB? It will happen sooner or later and it’s difficult to imagine Bayern Munich winning the league title every year but they are in pole position already this season.

The visitors arrive in town with their stats for the season showing 10 wins and one draw against two defeats, scoring 42 goals while conceding 13. That goals against tally is a little bigger than most fans would have expected after 13 games played but Bayern Munich have won four of their last five and were victorious in their most recent match. They have been pushed hard by teams in past seasons and come through unscathed.

FCB know victory here would see them move into a comfortable position approaching a crucial stage of the season.

Munich did suffer a surprise loss last month when going down 2-1 away to FC Augsburg. That wasn’t just the biggest shock in German football that day, it was one of the biggest in Europe’s big five leagues.

Bayern were able to bounce back and they did what was expected of them last time out when beating Arminia Bielefeld 1-0 last Saturday. The winning goal that day was scored by Sane with 71 minutes on the clock. Fans will demand much better here but the coaching staff would surely accept a win of any description.

Borussia Dortmund holds the home advantage for this game and they also boast the better recent form of the teams having picked up six points from their last two games.

If the locals are at their best they should have enough to trouble their guests but it’s possible the home fans wouldn’t be overly disappointed with a share of the spoils at this stage of the season against the reigning champions.

Bayern Munich are aware a defeat on their travels would cause them to tumble off the top spot but they also know a win over their main rivals for the league title away from home would be a crushing blow for Dortmund.

Bayern Munich have come through many similar chances over the years and have the experience to come good in this game. Anywhere near their best would be good enough to defeat any form of Dortmund.

Registered members of 22bet can back their predictions on this match with odds offered on the winner and several additional markets. Borussia Dortmund have been priced at 3.64 to win this game with Bayern Munich trading at 1.85 and the draw 4.18.

Make sure to bet on Borussia Dortmund v Bayern Munich with 22Bet!