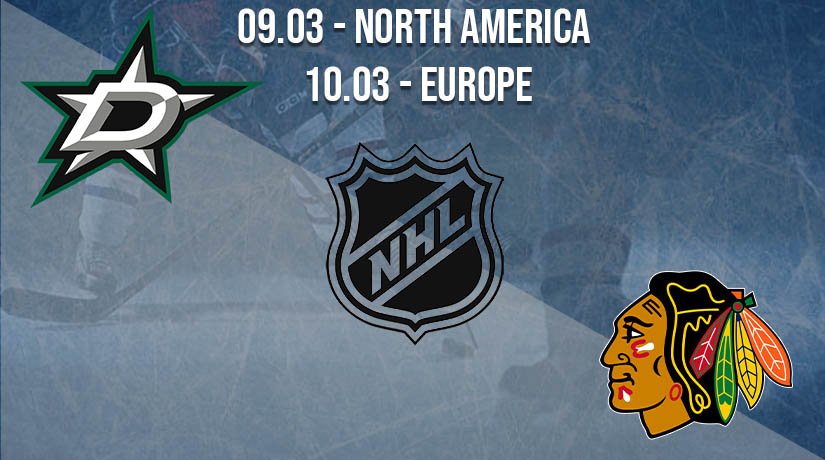 Dallas will face Chicago once again this season. Our experts have prepared a prediction for this match. Will Dallas get points in this home game? Let’s find out.

Dallas was able to end their next losing streak of four matches, beating Columbus (5-0). Finally, the team showed a decent game. Forward Roope Hintz showed himself best of all. He was able to give an assist and throw the puck. The victory over the Blue Jackets should have given the Stars confidence, but the team was defeated again in Nashville’s next meeting (3-4 SO). Once again, the Stars were unable to stop the opponent’s pressure, which is why they were losing for almost the entire game. Only at the end of the meeting, they levelled the score, and in the shootout, the Preds were more accurate.

Chicago played a five-game home series where they showed a good result. The team exchanged victories with Detroit, after which they had to play three times with the leader of the Central Division – Tampa Bay. Although the Blackhawks suffered two defeats, it is worth noting that the club was close to winning all the matches. The last game with Lightning showed that the Blackhawks were still inferior in class to their opponent, as Chicago was leading throughout the entire meeting. Still, they lacked strength in the end, which caused the Lightning to equalize, and after that, Tampa prevailed in regulation time.

Dallas again lost at home to an opponent who is far from the strongest, suggesting that the team continues to be on the decline. Chicago has consistently earned points for a long time, which is not the case for the Stars. It is worth noting that the Blackhawks show an excellent away game. In this fight, it is still worth giving preference to the Hawks.