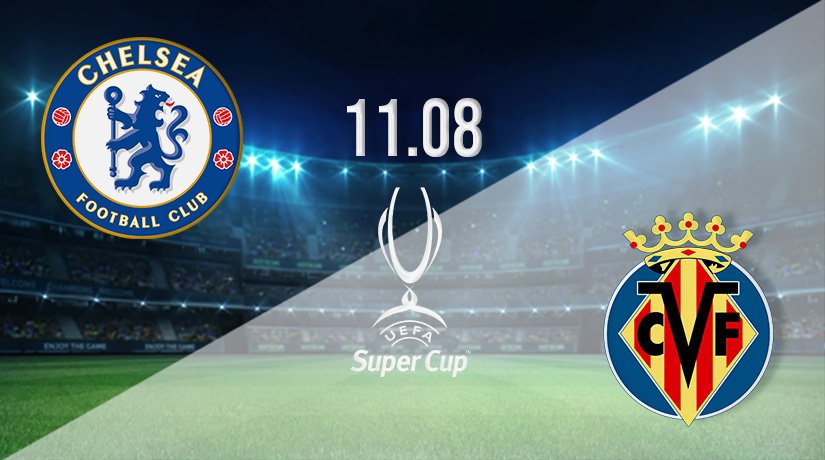 There’s plenty designed to keep football fans occupied in midweek with the qualifying rounds of the Champions League and Europa League continuing as well as the early exchanges of the EFL Cup in England. The new season is fast approaching and lovers of the beautiful game can’t wait to get started. There’s also a special feature on Wednesday from 20:00 GMT and that’s where our team focuses their attention. English Premier League side and Champions League winners Chelsea face Spanish La Liga outfit and Europa League kings Villarreal in the European Super Cup.

Some of the best talent in European football will be on show and although some may view this as a bit of a warm-up for the new domestic campaign, maybe just one level above the Community Shield we saw at the weekend, a competitive match is expected. These teams impressed when winning Europe’s two major trophies and the pressure is now on the players to show they are the cream of the crop. This match is the best against the best and those following the live TV action expect an exciting 90 minutes.

The record books show Chelsea and Villarreal have never met in competitive action and that was surprising. There’s nothing from the head-to-head to take clues from which means our team of football writers must dig a little deeper when making their predictions.

Chelsea are raring to go

Chelsea were crowned champions of Europe back in May when beating Manchester City in the Champions League final. It was a thrilling all English Premier League match that kept followers on the edge of their seats throughout. Despite starting as the underdogs, written off by many respected pundits who favored the Cityzens to finally conquer Europe, it was the Blues that came out on top. They won the most sought-after trophy in club football thanks to a 1-0 final score.

It was Chelsea’s second Champions League win after getting off the mark in 2012 and they achieved it thanks to a goal from Kai Havertz who found the net to sink Pep Guardiola’s City on 42 minutes. It was a tight scoreline but Chelsea managed to hold onto their advantage and finished the match fully deserving of the victory. Any Blues fans who still believe former manager Frank Lampard was unfairly treated became fully signed up members of the Thomas Tuchel fan club.

We are now ready to embark on a new season and Chelsea must look to the future. They are the current champions of Europe but supporters will be desperate to see them build on that and challenge Man City and Liverpool for the Premier League title. Winning the Super Cup will be the perfect way to round off their pre-season and give the team a confidence boost ahead of Saturday’s home derby against Crystal Palace at Stamford Bridge.

Villarreal out to prove a point

In UEFA’s second competition, the Spanish team’s success was due to a stunning win over another Premier League club in Manchester United on 26 May. The Red Devils were one of three English sides that made it through to the final of the European competition after Manchester City and Chelsea met in the Champions League decider. There was heartbreak for both the Manchester clubs as Chelsea beat City 1-0 and Villarreal defeated United. The Europa League final was a spectacular event and a match that will live long in the memory of all that witnessed it.

The game finished 1-1 after 90 minutes thanks to goals from Moreno on 29 and a Cavani equalizer struck with 55 on the clock. The teams couldn’t be separated, so the match went into extra time with neither side able to find a winner in the extra 30 minutes. That ensured the trophy would be decided on penalties, and it was a nail-biting marathon that produced 21 spot-kicks before Villareal won 11-10. All 20 outfield players scored in what was the longest penalty shootout to decide a Europa League trophy. Villareal goalkeeper Rulli blasted home before saving the kick from opposite number De Gea to settle things.

There are more competitive matches to come for both sides, and they would be forgiven for having one eye on their upcoming league matches. Chelsea manager Tuchel will want to get off to a winning start by taking three points against Palace at the weekend and setting themselves up as challengers for the trophy. That fixture will be played just three days after this one which will convince the Blues boss to protect some of his squad.

Villareal know winning this would send out a message to their Champions League competitors and convince critics they are potential champions. They have already beaten Manchester United and will believe they are good enough to defeat a Chelsea side that finished lower in the league than the Red Devils.

The pre-match betting available at 22Bet for this game has Chelsea priced at 5.15 with Villareal trading at 1.97 and the draw 2.68. As well as the match betting list, there’s also several pre-game options listed, including both teams to score, total goals and first goalscorer. 22bet members can bet on this game before kick-off or during the play.

Make sure to bet on Chelsea v Villarreal with 22Bet!