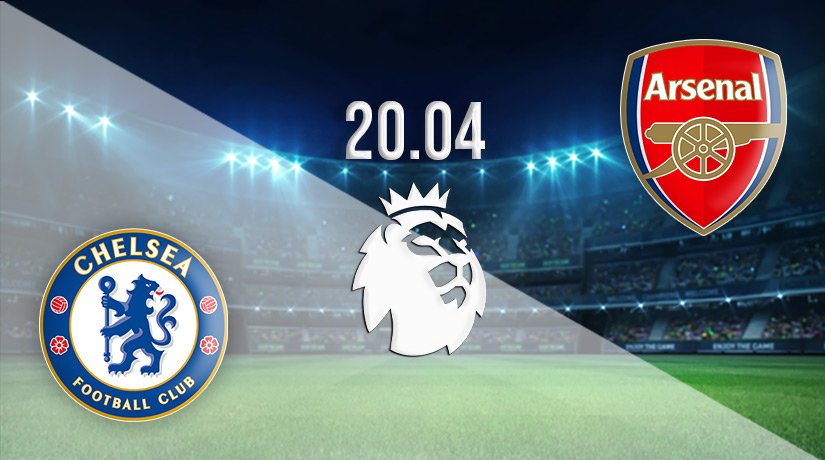 Two teams from the top six of the English Premier League clash on Wednesday at Stamford Bridge when Chelsea host Arsenal. This mouth-watering London derby match will be fought out from 19:45 GMT in West London before a capacity crowd and the millions watching the match live on television. Chelsea are the home team with the backing of a huge support, but, as experienced followers of this competition already know, nothing can be taken for granted in the Premier League, especially at this late stage of the season.

With both teams hoping for a top-four finish and a spot in next season’s Champions League, the three points will be hotly contested. But which side will delight their fans by securing a win and picking up all three points? That remains to be seen, but another competitive encounter is expected, and the stats tell us to prepare for an exciting 90 minutes of action. Two clubs from the same city with similarly high expectations added to the cauldron of noise we expect from Stamford Bridge. You must take your seat early for this game.

The Blues and the Gunners have already played once this season in the league, with Chelsea securing the bragging rights at the Emirates Stadium back in August. Much has changed at both teams since that game, but supporters of Chelsea will take heart from the 2-0 win achieved across the city in summer. The goals that day were scored by Romelu Lukaku, with the Belgian firing his employers into a lead inside 15 minutes before Reece James made it two before half time. An interesting stat relating to this fixture is that one team has failed to score in each of the last two renewals, with Arsenal winning 1-0 here 12 months ago.

It has been another rollercoaster season for Chelsea, with plenty of highs and lows along the way, but they are finishing strongly. Chelsea currently sit in third place with 62 points on the board. That tally leaves them a dozen points behind current league leaders Manchester City meaning the Blues won’t be challenging for the trophy. That’s a two-horse race involving Man City and Liverpool, with Chelsea aiming to finish as the best of the rest in third place. If they can hold their ground and end in the top three, securing Champions League football for next season, it will be remembered as a strong season.

The locals prepare for this game on the back of a strong run of form. The results from their last five league matches shows four wins and a defeat, making Chelsea one of the form teams in the division. The 62 points gained leaves them five better than fellow London club Tottenham Hotspur in fourth, with Manchester United in fifth place a further three points behind. Chelsea can begin to plan for an assault on next season’s Champions League as they aim to win the trophy back after being eliminated from the running recently. They’d like to do that by finishing as high up the league table as possible, and a third-place finish behind an evenly matched Man City and Liverpool would rate as a decent return.

We last saw Chelsea in Premier League action when hammering Southampton 6-0 at St Mary’s Stadium in one of the biggest wins of their season. Since putting six past the Saints, Chelsea have beaten Real Madrid 3-2 in the quarter-finals of the Champions League but were knocked out 5-4 on aggregate after extra time. They beat another city rival in Crystal Palace 2-0 on Sunday in the semi-final of the FA Cup, with the goals scored by Loftus-Cheek and Mount.

Gunners are running out of time

For the remainder of this season, Arsenal’s main aim is to smash their way back into the top four, but time is running out for Mikel Arteta. Like their opponents, Arsenal have struggled for the consistency needed to challenge for major honours this season. They did break into the top four and looked to be sitting pretty for a while, but the Gunners failed to handle a tough run of fixtures, and a run of defeats has dragged them down to sixth place in the table. They are now up against it if they want to be involved in Europe’s elite next season.

Arsenal have lost four and won one of their last five league starts, taking none of the nine points that have been available to them recently. The three defeats on the bounce is worse form than two of the three clubs currently sitting down in the relegation places, including bottom club Norwich City who have claimed four of the last nine. That’s a stat that will worry everyone connected to the club from North London, and it’s something Arteta knows they must improve on and quickly.

We last saw Arsenal in action on Saturday in the Premier League when they lost 1-0 at St Mary’s Stadium, beaten by a single goal scored by Bednarek just before half-time. That was a match Arsenal were expected to win and score a few goals in, and the defeat will worry fans, especially after seeing Chelsea put the same opponent to the sword not too long ago, scoring six goals, keeping a clean sheet and winning all three points.

Chelsea are higher in the table, hold the home advantage and boast the better recent form of the two sides involved here. Add that to the fact they hammered a team that Arsenal lost to at the weekend, and it’s plain to see why Chelsea are fancied by many pundits to win this match.

Arsenal are better than their recent form suggests, and we can expect to see them raise their game for this London derby. A win here may come as a surprise result, but it would help get the Gunners’ bid for a top-four finish back on track.

Make sure to bet on Chelsea v Arsenal with 22Bet!