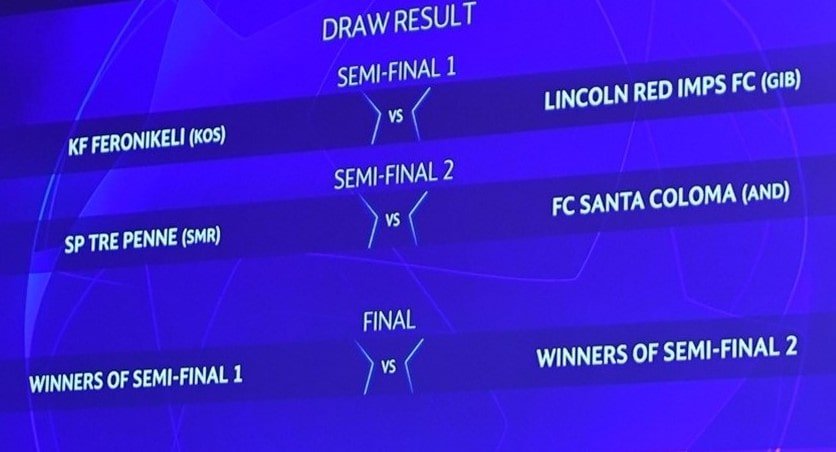 The preliminary round matches saw 4 different teams play for a single spot into the first qualifying round. There were 3 matches with single legs played, with the winners of the first 2 games playing in the 3rd.

Kosovan champions Feronikeli face off against Gibraltar side Lincoln Red Imps. Neither team has a particularly large European reputation, with the bigger competitors eclipsing the limelight. Before the match began, it could easily have been anyone’s game, and that’s exactly how it played for all but the first 10 minutes.

Quite an oddity, this game was decided in less than 5 minutes. Hoti, a homegrown forward from Kosovo, put the first goal in within 3 minutes of the starting whistle. The fiery start to the match came along with a near-post low-shot into the Red Imps’ net.

After a jaw-dropping start to such an unanticipated game on the European stage, the following 87 minutes didn’t keep the pace. It was a relatively equal affair with a similar number of attempts on goal, but Feronikeli having 3 on target to Lincoln Red Imps 1. Far from convincing, but the victory was deserved after Hoti’s near-post finish.

Sammarinese league winners Tre Penne were put up against Andorran champions FC Santa Coloma. It was quite a tense match, with neither side loosening up for the most part. Both teams were booked twice.

The first half was eventful but ultimately goalless. Tre Penne won the first corner of the 2019/20 Champion’s League within 2 minutes of kick-off. Between corners and free-kicks from fouls conceded, there were a few opportunities for goals, with neither side able to convert a goal until the 76th minute.

FC Santa Coloma striker Lopez Iglesias managed to slot in a rebound with some composure when Tre Penne keeper Migani made a save at the feet of another Santa Coloma forward. This was the only one of the game, leaving the goal tally at 1-0 to FC Santa Coloma.

With both teams winning their games on the 25th June 1-0, it was difficult to label a clear favorite. The 2 games that took place three days earlier were nowhere near as hard-fought or intense as the game that took place on the 28th June to end the preliminary qualifying round.

The first goal came from an FC Santa Coloma Chus Sosa’s right-footer from just outside the box, with it landing comfortably in the right side of the net. Coming from 1-0 down to equalize, Feronikeli player Zeka sent home another right-footer in the 58th minute. The tension could’ve been cut with a spoon by this point because even with a man down after a 49th minute red-card for Feronikeli.

The winning goal came not from either foot, but the head of Feronikeli’s Rexha. Less than 3 minutes to the 90th mark, a cross from outside the left side of the box floated into striking distance for Rexha’s head, going in off the keeper. This was easily the best preliminary qualifying round game for action.