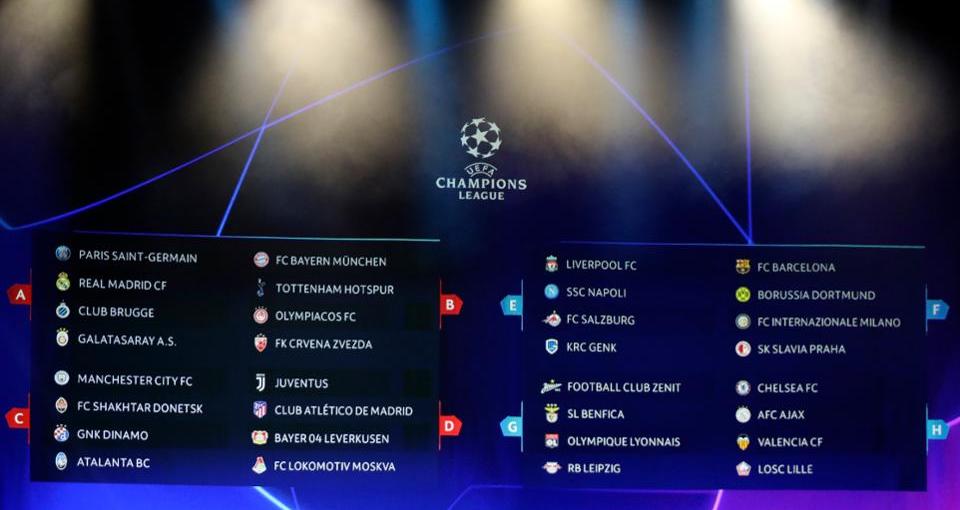 The draw for the Champions League 2019/20 group stages has been made, and the top teams around Europe can begin to plot their route to the final in Istanbul. However, while some teams have a straightforward path, there could be some stern obstacles for others.

One of the best looking groups on paper will see Real Madrid and PSG go head to head. The Spanish and French giants will do battle for the top spot, while Galatasaray and Club Brugge will be hoping to spring a shock. However, it would see them that the third and fourth seeds will be doing battle for the third spot and a place in the Europa League after Christmas.

Last season’s beaten finalists have once again been handed a tricky group with tough away trips to Olympiacos and Red Star Belgrade. Along with Tottenham Hotspur, there is also Bayern Munich. But, the winning side in this group will likely be decided by the away results.

Manchester City would have been pleased with their group, as they would be expected to get maximum points against Shakhtar Donetsk, Dinamo Zagreb and Atalanta. The race for the second spot will be the most intriguing, with Serie A newcomer’s best placed for that challenge.

Juventus and Atletico Madrid played out an intriguing match-up in last season’s competition, and they will once again do battle in the group stages. Bayer Leverkusen and Lokomotiv Moscow round off the group, but it’s unlikely that the Spanish or Italian giants will crash out.

It is déjà vu for Liverpool and Napoli as they have once again been picked in the same group in the Champions League. The two clubs will likely be the two to progress, with Salzburg and Genk both competing for a place in the Europa League.

The group of death sees Barcelona, Borussia Dortmund and Inter Milan go head to head. With only two spaces in the next round, it will be intriguing to see which sides qualify. Slavia Prague rounds off the group, but they will likely be the beating boys in this group.

The group that every side in it will have hopes of qualification sees Zenit, Benfica, Lyon and Leipzig setCham to do battle. All four teams will feel that they will have a chance of reaching the next round, and at this point, it looks impossible to call.

Chelsea’s return to the Champions League sees them handed a tricky looking group which also contains last season’s semi-finalists Ajax, as well as Valencia and Lille.