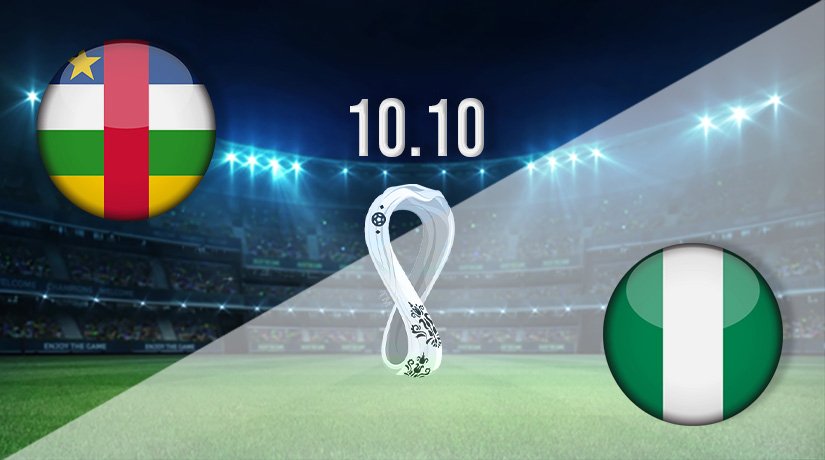 Football fans have a hectic Sunday after with World Cup qualifiers boosted by lower league club action in many nations. There’s also a mouth-watering tie involving France and Spain as the two giants of European football clash in the final of the Nations League. You will find our in-depth preview of that game elsewhere on our site as our football writers cover the big match and give their predictions.

On this page, we concentrate on a fixture from the World Cup qualifiers where the Central African Republic take on Nigeria in what is sure to be a thrilling contest and fantastic watch for armchair fans.

CAR don’t hold out much hope of making it out of this qualifying group and to the World Cup in Qatar 2022. If they did, it would create history, but recent results in this pool mean it’s not yet impossible but is highly unlikely.

Nigeria does have an opportunity to go all the way to Qatar and would boost their chances if they were able to bag another three points on Sunday, scoring a few goals in the process. They are the pundits pick here, and the players will be out to flex their muscles.

These teams have met only once before in competitive action, with that fixture coming in this group earlier in the year. Nigeria were strong favourites again that day, but the match produced a stunning upset, with Central African Republic grabbing a hard-fought 1-0 win.

That was a little over a month. Can they do it again and complete the double, or will we see Nigeria battle back to level the score and boost their chances of qualifying as set winners?

The Central African Republic pulled off one of the shocks of the year and the biggest results in the team’s history when beating Nigeria on 7 October 2021. They entered that match as a rank outsider, written off by most respected African football pundits who expected them to crumble under the might and experience of Nigeria.

On paper, it’s a match they should have lost convincingly, but one of the main reasons football is so popular worldwide is that it rarely follows a script. It’s dangerous to write off any team as having no hope as they will often cause a surprise and get the win. That’s exactly what CAR did.

They claimed the victory and all three points that day thanks to a narrow but deserved 1-0 result. They rode their luck at times, and Nigeria seemed to have an off day in front of goal, passing up several good chances to score, but at the final whistle, there could be no denying the right team won.

CAR deserved the points and deserved their day in the sun. The players would have enjoyed the occasion and, having had a taste of it, will want to win again and prove it was no fluke.

Despite the win gained over Nigeria, CAR are placed third of four teams in the group with stats of one draw, a defeat and that victory. The four points on the board mean they are two behind leaders Nigeria, level with Cape Verde and one better than bottom club Liberia.

If CAR wins this match, they will keep their chances of qualifying alive, but if they lose the game, they can kiss goodbye to any hope of going to Qatar. It’s all or nothing here, and the players will understand that going in.

Nigeria out for revenge

The Nigerian players and fans will still be hurting after that loss to CAR last month, a defeat that leaves the group hanging in the balance. If they had done as expected and won that day, the group would have been over as a contest with Nigeria out in front, edging closer to that place at the World Cup, but, as it stands, there’s still plenty of work to be done on that front.

They are at the head of the pool but are also just three points better off than bottom club Liberia, so there’s still all to play for.

After three games played, we find Nigeria in pole position with their stats for the campaign so far reading two wins, and that defeat suffered to CAR. They have scored two goals and conceded one.

That is hardly the form of a team you’d expect to be playing World Cup football next year and holding their own against the best teams on the planet. At this stage, even if they do make it to Qatar, they won’t be expected to stay there long.

Improvement is required, and everyone with an interest in team Nigeria knows it. They can start by gaining revenge over CAR and taking a step closer to qualifying.

To achieve that, Nigeria must be far more ruthless in attacking areas of the pitch, with each of their two previous wins at this competition producing 1-0 results.

The team are creating plenty of chances and have the talent to turn those chances into goals, but the strikers must be more clinical if they are to live up to expectations and fire Nigeria through. This looks like the perfect game to do that.

CAR can be proud of how they performed in the first game against Nigeria when nicking that 1-0 win, but they will be under no illusions of the size of the task ahead of them here. Nigeria will be out for revenge, and although their recent form isn’t too impressive, they are capable of much better.

Nigeria is certainly capable of getting their revenge and grabbing the points to take control of the pool.

The points are the most important thing here, but the Nigerian fans also want to see their team put in a big performance.

They want to see a few goals, some nice attacking play, a clean sheet and reason to believe they are good enough to go to Qatar and hold their own. The players know they are under pressure to shine, but they have the quality to do that.

The pre-match betting odds available at 22bet has the Central African Republic available at 11.5 for another win, with Nigeria trading at 1.325 to win and gain revenge while the draw is 4.66.

Make sure to bet on Central African Republic v Nigeria with 22Bet!