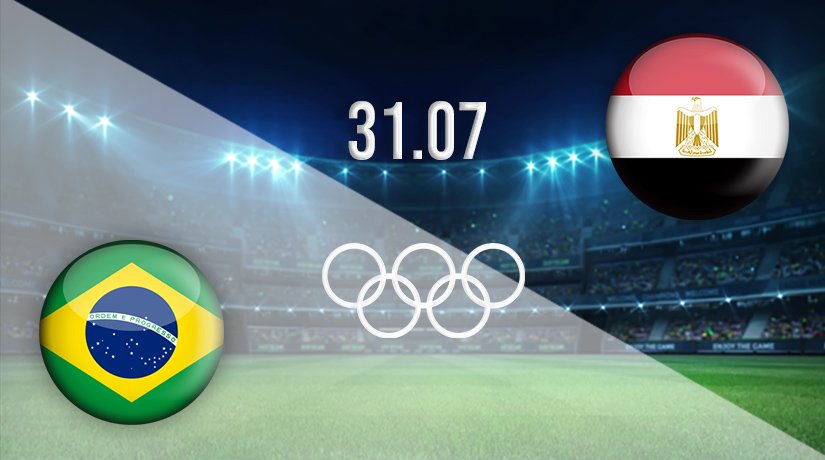 The men’s football tournament at the Tokyo 2020 Olympic Games is well underway and as we reach the weekend the games move into the knockout stages. The quarter-final games get started on the final day of July with no less than four games scheduled. Kick-off times are staggered between 09:00 and 12:00 meaning armchair fans have a hectic morning to look forward to. This article focuses on our game of the day as Brazil face-off with Egypt with a place in the last four at stake.

The Samba Boys and the Pharaohs are here on merit and have played their part in a thrilling competition so far, but one will exit the play with their opponents heading into the semi-finals. Which team will grab their chance and move forward before a global audience? Brazil were one of the early favourites to win the gold medal but to have any chance of living up to expectations they must overcome a tricky Egypt side who are no strangers to causing an upset and are capable of pulling off another shock.

The nations have never met in competitive action which means there’s nothing for followers of the stats to go on when looking for hints in the head-to-head numbers. Both teams have played three group games each, and that gives us strong form to go on. Read on as our team of football writers preview the match, make their predictions and cover the odds.

Brazil won their group at a canter

Many professional football punters picked out Brazil as favourites to win the gold medal at the delayed Tokyo 2020 games. The rules were relaxed to accommodate the extra year by extending the teams to under 24 year olds with three overage players permitted for selection. The Samba Boys had no trouble living up to expectations during the group stages and progressed as winners of their pool. They came through at a canter, finishing ahead of Ivory Coast, Germany and Saudi Arabia. The surprise package of that group was the second Ivory Coast, who came through unbeaten.

The group winners finished with two wins and a draw from their three games, the seven points collected from nine ensuring they came home two points ahead of the runners up. Looking closer at their stats, Brazil scored seven and conceded three,e which makes them one of the highest-scoring teams of the groups. They opened with a stunning 4-2 win over Germany on matchday one to lay down a marker before drawing 0-0 with Ivory Coast.

Their most recent game saw Brazil sign off from the group stages with a comfortable 3-1 win over Saudi Arabia who finished bottom. Brazil needed the win to secure top spot and they got it by brushing past the bottom club. Goals from Da Cunha and a stunning Richarlison double did the business. Brazil never got out of first gear in that match and fans will be encouraged by the fact there’s more to come from this team.

Egypt progress thanks to late smash and grab

Egypt weren’t expected to get through the group stages of Tokyo 2020 after being dropped into a pool alongside Spain, Argentina and Australia. The Spaniards were favourites to win the group and they did just that, banking five points from a possible nine but finishing unbeaten. The race was on for second, and Egypt caused an upset, finishing ahead of Argentina and Australia. Egypt finished level on points with Argentina but finished with a +1 goal difference while Argentina posted a surprising -1 goal difference.

Egypt made the worst start possible, and their campaign looked to be over almost before it had begun. They claimed only one point from their first two games, which left them struggling, looking more likely to finish bottom as in one of the top two qualifying spots. The set was taking the shape most expected it to. Egypt opened with a draw versus eventual group winners in Spain. That wasn’t the worst result against the best team in the group, but it got worse when losing to Argentina. That match finished 1-0, which pushed the victors to within touching distance of the top two and the beaten club to the edge of the cliff, ready to tumble out of the running.

However, there was to be one final twist in the tale as Egypt roared back into contention and grabbed the runners-up spot. They needed a strong win on Wednesday against a decent Australian team, and they got it. That game finished 2-0 to Egypt with the goals coming from Rayan just before half-time and Omar five minutes before the finish. The second goal was the one that sent them through.

Brazil were the far more impressive team during the group stages and progressed as pool winners while Egypt snuck through in the final game. That counts for nothing now, as Brazil and Egypt know this is one game to determine which side goes through.

Extra time and penalties are available if needed. Brazil will enter as favourites for the win with most football fans, but they can’t afford to take their opponents lightly. If Brazil looks past Egypt, they could be made to pay a hefty price. The Egyptians showed in their previous game they are a danger, have the quality to create scoring chances and the attackers to hit the net under pressure.

The pre-match betting available at 22bet has Brazil priced at 1.37 with Egypt trading at 8.4 and the draw a 4.9 option.

There are dozens of pre-match betting markets available to 22bet members in addition to the match-winner. Some of the most popular bets include both teams to score, handicap, total goals, first goalscorer, correct score and more.

As we enter the knockout rounds of Tokyo 2020, our team of football writers will be covering the matches that matter in detail, including the gold medal match next week.

Want to know more about the betting odds for the game? Check out the BTTS, Handicap, Teams to Win and other markets and bet on Brazil v Egypt on 22Bet!