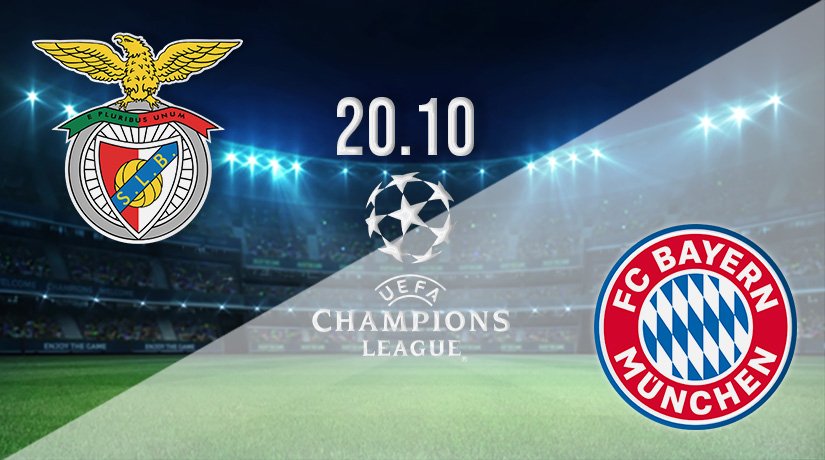 The Champions League action returns on Wednesday with another round of matches featuring some of Europe’s top talent. There is a selection of fascinating matches ahead of us and with every game scheduled to be shown live by major TV stations, it promises to be an exciting evening for armchair fans and lovers of the beautiful game. On this page, our team of football content writers focus on the Group E match involving Benfica and Bayern Munich which is scheduled for a 20:00 GMT start. This one will attract a huge audience with millions watching around the world.

Benfica and Bayern Munich start this match in the first two places and look strong contenders for a place in the playoff rounds. The German Bundesliga champions were picked by all reputable pundits to finish in pole position and have lived up to expectations so far. They enter this game parked in pole position knowing another three points and extension of their perfect record would move them closer to the finish line. Benfica are eager to use home advantage to take something from this game but are experienced enough to know nothing comes cheaply against the Germans.

The history books make for interesting reading with this being the ninth time these sides have met in competitive action. The head to head stats stands at five wins for Bayern Munich with three games ending in a draw. The most recent clash produced a stunning 5-1 win for FCB in this competition three years ago. Will this match produce more of the same or can Benfica finally get off the mark and defeat Bayern?

The home team enter this match with an impressive unbeaten record from their previous two Champions League outings. They have claimed four of the first six available to them after following an opening day draw with victory in their most recent outing. After being added to Group E with Bayern Munich, Barcelona and Dynamo Kyiv it was predicted that Benfica would spend much of their brief stay in the Champions League scraping to secure Europa League involvement but they have surprised their critics.

The opening day draw came in Kyiv when fighting out a goalless finish with Dynamo on the road. It was a match fans would have expected them to win but it’s not an easy away trip in the opening game of the group and a draw was a fair result. Benfica did create chances on the break that day and could have held their composure a bit better in the final third of the pitch to turn chances into goals but few were complaining at the final whistle. They avoided defeat at Kyiv and came away with a hard-earned point that showed they are up for the fight of getting through this group.

Benfica recorded one of their most memorable wins in the club’s history when last in Champions League action, hammering Barcelona 3-0 at home. The La Liga giants are suffering a tough time of things and were forced to release Lionel Messi in the summer to help balance the books but Benfica deserve full credit for the performance and the win achieved. They were ahead inside the first three minutes of the game and never looked like losing from there.

Bayern Munich are the long-reigning champions of German football, but they haven’t lived up to expectations in Europe over the last few seasons. They get through the groups without too much hassle but have come up short in the latter stages as English teams have dominated the semi-finals and final in the last few years. Is this the campaign Munich fight back and return to the head of UEFA’s elite list of teams? They certainly look good enough on paper and have been picked by many respected pundits to get the job done.

Munich enter game three of the group sitting in pole position with a maximum of six points on the board. They have played two and won two, scoring eight goals and keeping a pair of clean sheets. The German club are ruthless in attack, but it’s that solid defence that could see them go all the way to lifting the trophy in spring. Good teams always have a strong attack, but the best teams build everything off a secure backline. Bayern aim to do the same.

They warmed up for this contest by thrashing Bayer Leverkusen away from home in the Bundesliga on Sunday. Making a mockery of what had been billed as a competitive match, the champions eased to victory, winning 5-1 with three different scorers. Lewandowski and Gnabry scored two each, with the other goal coming from Muller. Confidence is sky-high in the camp, and fans will expect to see Bayern pick up another three points here.

Benfica enjoy home comforts for this match and will hope to make it count, but they know they’ll need every advantage going to stop Bayern Munich. A meeting of two unbeaten sides often makes for an enjoyable contest, and this should be no different. Benfica are unlikely to meet fire with fire and attack Munich early, but they will strive to be organised in defence.

The visitors haven’t conceded a goal in this competition yet and will want to continue that run of clean sheets in this match. The defence is good enough to achieve that, and that gives confidence to the forward players to get up the park, create chances and score goals. If Bayern Munich are at their best, they should return to Germany with all three points. Doing so will move them a step closer to progressing to the knockout rounds as group winners, showing they are serious about winning the trophy.

Make sure to bet on Benfica v Bayern Munich with 22Bet!