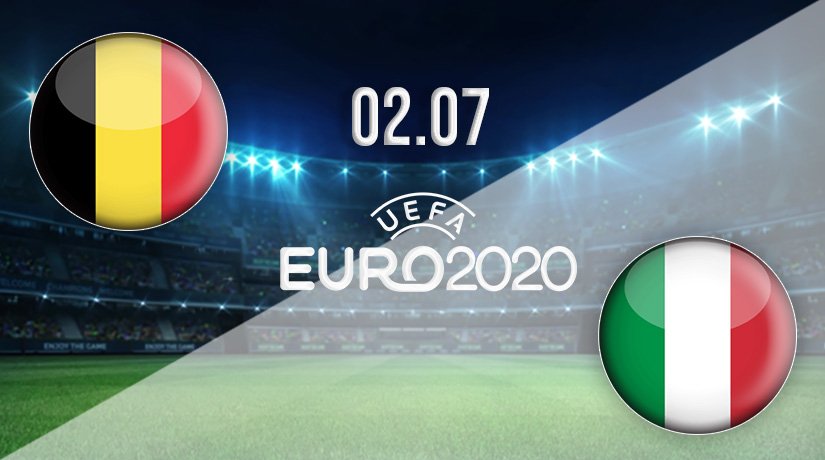 The second of two explosive matches scheduled for Friday in Euro 2020 kicks off at 20:00 GMT when Belgium take on Italy. This is a blockbuster clash, with both nations knowing that if they win this game, they will have a strong chance of going all the way to the final at Wembley and winning Euro 2020. There’s still plenty of football to be played in this tournament, and neither side can allow themselves to become overconfident and start looking ahead to the semi-final.

These teams have met 22 times in the past, with Italy dominating the head-to-head stats. The scores ahead of this renewal show 13 wins for the Italians, with four victories for the Belgians and the other four games ending in a draw. This will be the first time the nations have crossed paths since 2016 in the European Championships when Italy eased to a comfortable 2-0 victory thanks to goals from Giaccherini and Pelle, the latter scoring with 90 minutes on the clock.

Taking a closer look at the stats and a trend becomes noticeable, with 3-1 being the final score in three of the last five games. Fans would love to see their side win 3-1 again here in front of a huge audience, but the result is more important than the performance at this stage. It’s all about winning by any means possible and booking a slot in the semis. Let’s catch up on the form of both Belgium and Italy ahead of what promises to be an exciting renewal.

Belgium knock out the holders

Belgium was one of the most impressive nations during the Euro 2020 qualifying campaign and despite the extra 12 months wait, the team had no trouble picking up where they left off. They came through Group B this summer as winners of the pool with a perfect nine points on the board, thanks to three wins from three. That tally left them clear of runners up Denmark in second, who posted just three points and finished above Finland and Russia on goal difference.

Having won their group without ever getting out of first gear, Belgium moved into the tournament’s knockout stages, where fans expected them to carry on winning. They did just that at the expense of Portugal, knocking the holders out with a 1-0 win achieved thanks to a goal from Hazard just before halftime. The Portuguese battled hard to get back into the contest, but Ronaldo and co couldn’t find a way past a solid Belgian defence. Having scored the goal to get their noses in front, Belgium showed just how tough they are mentally when having the organisation in defence to protect their lead.

Looking at Belgium’s stats at Euro 2020 so far, we see they have scored eight goals in their four matches and conceded just one. Denmark scored the spare in a 2-1 victory for the Belgians, who fought back from a goal down after Poulsen broke the deadlock inside the game’s first two minutes.

Italy coast through the group

Despite being former winners of the European Championships, Italy found themselves written off by many pundits and industry experts before kick-off. That caught the eye of football fans who love to support an underdog with bite. The Italians are a team littered with quality and, on paper, knew they were a match for any team in this competition. They set about proving it in the group stages and won pool A at a canter, finishing with a maximum of nine points after three games. That tally saw them progress with ease, finishing five points better than Wales in second, who was ahead of third-placed Switzerland on goal difference. Italy did what was expected of them, and they did it without getting out of first gear.

They continued their stunning form this summer in the knockout rounds when rising to the occasion to defeat Austria 2-1 but needed extra time to achieve it. That was a Round of 16 match that looked simple on paper, but the victors were made to work for their prize, pushed hard by a dogged and determined Austria side who were confident in their ability to cause an upset and keep the dream alive. In the end, the Italians proved too strong, calling on all their big match experience to go through.

That game ended goalless after 90 minutes, so proceeded into extra time when Italy came good, showing superior fitness and game management. Chiesa finally broke the deadlock on 95 minutes before Pessina added a second with 105 on the clock to give them a two-goal lead. It looked like the Italians were home and hosed at that point, but they were made to sweat, with Kalajdzic scoring on 114 minutes to make for a tense finish to the game.

This is a meeting of two huge teams who will enter the match with the belief they are good enough to secure a win and progress to the semi-final at Wembley Stadium in London. They must be at their best to achieve that, and this will provide armchair fans with a thrilling contest. Extra time and penalties are available if required.

Belgium have conceded just one goal at Euro 2020, and it came early in a match they went on to win. Italy has conceded just one goal this summer, but it was scored in extra time when they already had a 2-0 lead on the board. This will be a case of which team holds their concentration best in defence, something the Italians have plenty of experience in doing over the years.

There are over 100 pre-game options available, including both teams to score, handicap, first goalscorer, half time / full time and total goals.

Want to wager on other betting markets, such as BTTS, Handicap or Total Score? Make sure to bet on Belgium v Italy with 22Bet!