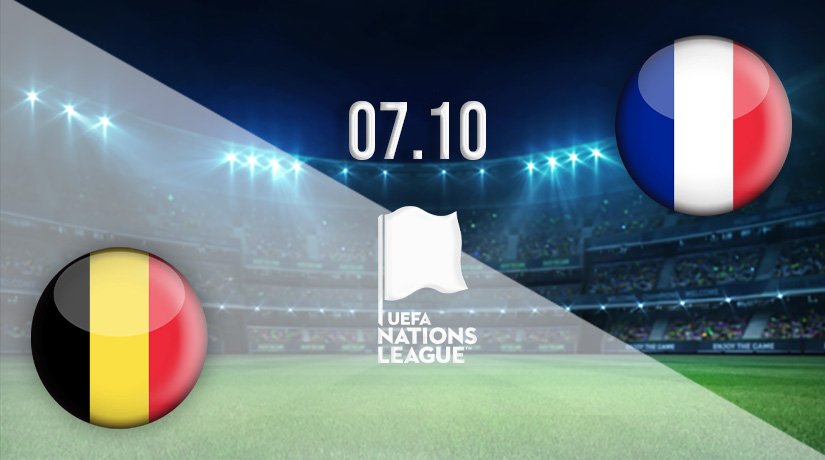 The second UEFA Nations League semi-final will be played on Thursday evening with a 19:45 GMT kickoff, 24 hours after Italy and Spain clashed in the other semi. Belgium and France face off to bag their place in Sunday’s final, which will be played five hours after the tournament’s third-place playoff.

Which side will take part in the top of the bill match, and which will be forced to battle it out for a bronze medal. Armchair fans can follow all the action live on television, and with extra time and penalties available, if needed, this should be a thrilling match.

The pressure is on Belgium and France to win this match and go on to become Nations League champions after they failed to live up to expectations at Euro 2020. France were picked by many respected pundits as the most likely winner of the delayed Euros, with Belgium thought to be the main danger to Les Bleus.

Neither got near the final at Wembley as Italy fought back from a goal down to beat England on penalties in July. Misery for fans of both nations, but if they can win the Nations League and go on to challenge for the World Cup in Qatar next year, all will be forgiven.

The stats attached to this fixture shows Belgium and France are no strangers. The pair have clashed 29 times previously, and there’s nothing to separate them in the betting. Belgium has ten wins, with France on ten wins and the other nine matches ending in a draw.

The most recent game produced a 1-0 for France at the 2018 World Cup when Samuel Umtiti scored the winning goal just shy of the hour mark.

The Belgians were last seen in UEFA Nations League action when battering Denmark in what was a real show of strength. They were favourites for the home win that day, but the players deserve credit for the way in which they got the job done, easing to a 4-2 victory against a talented and organised Danish side that some had picked to cause an upset.

That win came back in mid-November, but a lot has changed with the Belgian team since, and they must now fight back from a disappointing summer.

They were eliminated from the European Championships in early July, beaten by Italy, who went on to win the trophy by beating England in London. The Azzurri beat the Red Fury at the Allianz Arena in Munich, Germany, with the final score settled at 2-1 to the Italians.

First-half goals from Barella and Insigne were enough to see Italy progress despite a spirited comeback from Belgium, who fired back just before the break with a goal from Lukaku, who rifled home a penalty.

Belgium enter this match on the back of three World Cup qualifying wins achieved over Estonia, Czech Republic and Belarus. They were expected to win each match but impressed when scoring a total of nine goals in those three outings while conceding just three.

Such a ruthless attack will be required if Belgium are to make it to Sunday’s final, but the coaching staff must also ensure the defence stands firm against a talented French offence.

The French kicked off Euro 2020 as the team to beat, supported by pundits, former players and the betting. That came as little surprise, and they were worthy favourites as the squad was packed with talent and looked good enough to go all the way. They didn’t, of course, with Italy wearing the crown and England ending as runners up.

Les Bleus were knocked out by Switzerland at the end of a six-goal thriller and one of the most memorable games of the summer. The final score was 3-3, with Sweden progressing on 5-4 on penalties.

Their most recent appearance in the UEFA Nations League came back in November of 2020 when France dealt with Sweden in Paris, blasting out the Swedes without encountering too much drama along the way.

That game ended 4-2 with the goals scored by Pavart, Coman and a double from Giroud, who is becoming something of a regular feature on the scoresheet for club and country in recent times.

It was a confidence-boosting win that secured their place in the semi-finals, but Sweden did score first that day, breaking the deadlock inside the opening four minutes of the play.

The French played three World Cup qualifiers last month and only managed one win, beating Finland 2-0 at home in their last outing.

That win came on the back of two draws over Bosnia and Ukraine, each match ending 1-1. Nine points were expected, but France managed just five, and that will worry fans. Bouncing back to beat Belgium before winning the Nations League trophy would help settle the nerves of the support, but to achieve that, the team must improve defensively.

If either decides to throw caution to the wind and go on the attack early, they could be made to pay a hefty price. Expect a tactical affair with the battle fought in the middle of the park.

Belgium and France boast talented attackers, but both can be caught on the break, and that’s what makes this so interesting.

The stats show four of the last five games involving Belgium and France have produced no more than two goals, with at least one team failing to find the net. France won 1-0 last time, but that came after a pair of goalless draws. Followers of the stats may wish to keep that in mind when making their predictions.

Make sure to bet on Belgium v France with 22Bet!