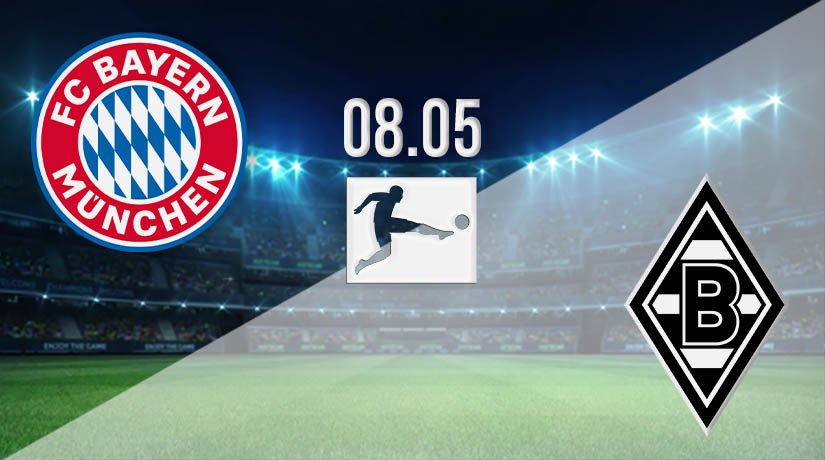 Battles rage at both ends of the German top-flight table as teams struggle to find consistency in the closing weeks of the campaign. Clubs battling for a top-four finish have suffered recent losses while teams in the relegation zone are showing signs of fighting back and making things enjoyable in the closing games. There’s plenty to keep followers of the German Bundesliga glued to the live TV action this weekend. In this big match preview, we focus on Bayern Munich’s home game against Borussia Monchengladbach from 17:30 GMT on Saturday.

League leaders Bayern Munich aims to make a quickfire return to winning ways when hosting Borussia Monchengladbach on Saturday. The home team lost their most recent league game but remain top of the table and edging closer to yet another Bundesliga crown. At present, the only team that can stop them is RB Leipzig, but time is against the Bulls. Three points would move Munich to within touching distance.

These teams served up a classic earlier in the season when Monchengladbach won the points by the odd goal in five. 3-2 was the final score that day, and it’s worth noting that both teams have scored in each of the last four games involving these clubs. Will that trend stretch to five games? Armchair fans and neutrals hope so.

Munich in control as they edge towards another title

Bayern Munich started the season as favourites to win the Bundesliga title and continue their dominance of German football. They sit in pole position after 31 games played, but it hasn’t been plain sailing in this campaign. It took last season’s champions some time to hit their stride, and they looked to be struggling to keep up with the pace while juggling their Champions League commitments. After being knocked out of UEFA’s premier competition, FCB was able to focus on defending their domestic title.

A tally of 71 points places them six ahead of RB Leipzig in second. The home team show season stats of 22 wins and five draws against four defeats with 86 goals scored and 40 conceded. There is no surprise in their goals for tally as Munich are consistently the highest scorers in the league, but their defensive record is worrying for fans. Munich has conceded Union Berlin, which is down in eighth place.

Of their last five league games, we’ve seen Bayern Munich win three, draw one and lose the other. The single defeat came in their most recent league start when going down to Mainz away from home, losing that match by a 2-1 scoreline. Burkardt and Quaison were both on target inside the first 37 minutes of the game before Lewandowski scored a consolation goal deep into stoppage time.

Borussia hoping for a European finish

Borussia Monchengladbach is a team who are often seen challenging for a top-four finish and place in the Champions League, but they have underperformed in this campaign and are out of the running for a prize place. The visitors travel in seventh place, hoping to get the win needed to keep alive their hopes of finishing in the top six to secure a spot in next season’s Europa League. A drop in standards from what they are used to, but the players know they must secure European football.

Monchengladbach has 46 points on the board, which is four less than Bayer Leverkusen in sixth. They start with season stats of 12 wins and ten draws against nine defeats with 59 goals scored and 46 conceded. Borussia has scored more goals than RB Leipzig in second and Wolfsburg in third but has conceded just two fewer than Hertha Berlin, who is second from the bottom of the league and facing relegation. A leaky backline has hampered their progress, and it may be too late in the season to fix it.

In their last five league games, we’ve seen Borussia Monchengladbach win three, draw one and losing one of their previous five. They were beaten 3-2 by Hertha Berlin last month but responded to hammer Arminia Bielefeld 5-0 when last in league action. The latter result would have done wonders for team morale heading into the final few weeks.

Bayern Munich holds the home advantage and has been much the better team of the two over the course of the season. The players inside the home dressing room will rate their chances of grabbing another three points and taking a step closer to retaining their title. Every point brings them closer.

Borussia Monchengladbach understands the size of the task ahead of them, but they also know this is a game they must win if they are to make it to Europe. The visitors will take heart from their host’s recent defeat and hope Munich has taken their foot off the gas in the campaign’s closing weeks.

Looking through the stats attached to this fixture, we see both teams have scored at least one goal in each of the last four renewals. We could see this one fall into line and produce another entertaining, free-scoring match. It’s also worth noting that in the previous five games, these teams have produced a total of 20 goals which is remarkable. Monchengladbach has won three, with Bayern Munich taking the other two victories.

The pre-match betting odds available at 22bet for this fixture has Bayern Munich priced at 1.352 to win the game while Borussia Monchengladbach is 7.2 to come away with all three points. The draw will net you 5.65.

As well as match-winner betting, there are also many other markets available to bet on this match. Have your say on which player will score the first goal or what the correct score will be. You can back both teams to score yes/no, handicap, half time/full time and more.

When the game kicks off at 17:30, there will be dozens of in-play betting markets available. Many of the pre-match options remain live through the 90 minutes, with odds updated to reflect the score.

Make sure to bet on Bayern Munich vs Monchengladbach with 22Bet!