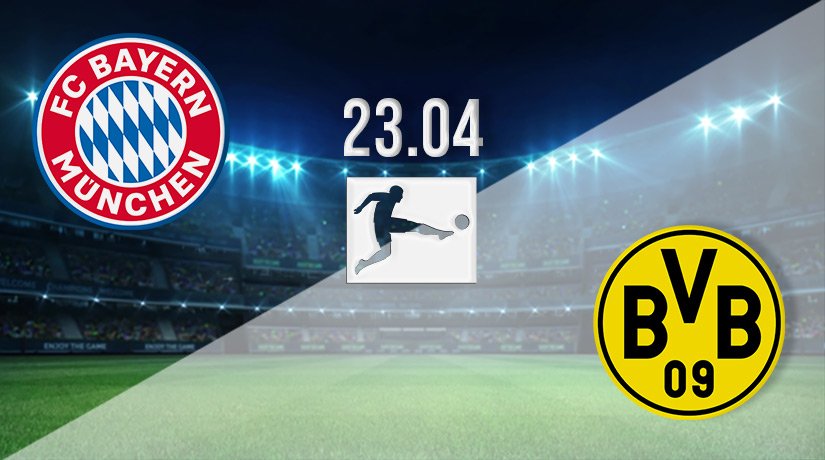 The pivotal Der Klassiker takes place on Saturday at 17:30GMT when league leaders Bayern Munich (with a nine-point lead) host their closest challengers Borussia Dortmund at the Allianz Arena in a fixture that could see the Bavarians move to within a point of clinching this season’s title with a win.

Can Bayern Munich Kill off Dortmund’s Hopes for a Title Challenge in the Last Four Matches of the Season?

The dominant Bayern Munich will be looking to all but wrap up the Bundesliga title in their clash with Dortmund.

With a nine-point lead at the top of the table, a win will stretch their lead to 12 points with three matches remaining in the season.

Mathematically, with a 12-point lead, Julian Nagelsmann’s side will then need just a point from the remaining three matches to win their 10th successive Bundesliga title.

Can Dortmund Jolt Some Life into the Bundesliga in the Run-in by Beating Bayern and Cutting the Gap to Six Points?

This is a must-win for Dortmund if they are to keep the title race alive for a few weeks more.

A loss at the Allianz Arena will be as good as handing the title to Bayern. Even though a win might just postpone the inevitable, Dortmund will be pumped to spoil the party for their Bavarian rivals on Saturday.

Borussia will be looking to make it three consecutive wins in the Bundesliga with a victory at the Allianz Arena.

Nagelsmann’s side have won their last four matches in the Bundesliga as they have stepped up their bid to wrap up this season’s title ahead of their closest challengers Dortmund.

They have collected 13 points from their last five Bundesliga outings, with the dropped points coming in the 1-1 draw against Hoffenheim.

Nagelsmann will be focused on getting the win against their biggest Bundesliga rivals as they seek to wrap up the title.

Dortmund have collected 13 points from their last six Bundesliga outings. They have won four times, drawn once, and lost once in this run.

The only loss in this run came in the humbling 4-1 defeat against RB Leipzig, with the draw coming in the 1-1 stalemate against Koln.

Dortmund will be looking to make it three wins on the trot in the Bundesliga when they face Bayern on Saturday as well as making the league interesting in the run-in by postponing Bayern’s coronation as champions for the 10th consecutive time.

Nagelsmann will be without centre-back Lucas Hernandez, as the 26-yer-old recovers from muscular problems he has had since April 13th, 2022.

Left-back Marcel Schmelzer (knee surgery), right-back Mateu Morey Bauza (injury to the cruciate ligament), and centre-forward Steffen Tigges (fracture-dislocation of the ankle) are also doubts for the clash with Bayern on Saturday.

With 45 goals and five assists, Lewandowski is firmly Bayern Munich’s most important player. He will be crucial for Bayern in the clash with Dortmund.

Haaland has 21 goals and 7 assists across 23 appearances for Dortmund this season. The striker will be crucial for Dortmund’s chances of causing an upset at the Allianz Arena on Saturday.

Bayern Munich will employ their high-tempo and high-pressure approach to the match. The Allianz Arena will be rocking as the Bavarians close in on their 10th successive Bundesliga.

Dortmund will absorb the early pressure and pose their threat with vertical attacks and a direct approach when in possession.

Bayern Munich are favoured to win this match and all but wrap up the title.

Make sure to bet on Bayern vs Dortmund with 22Bet!