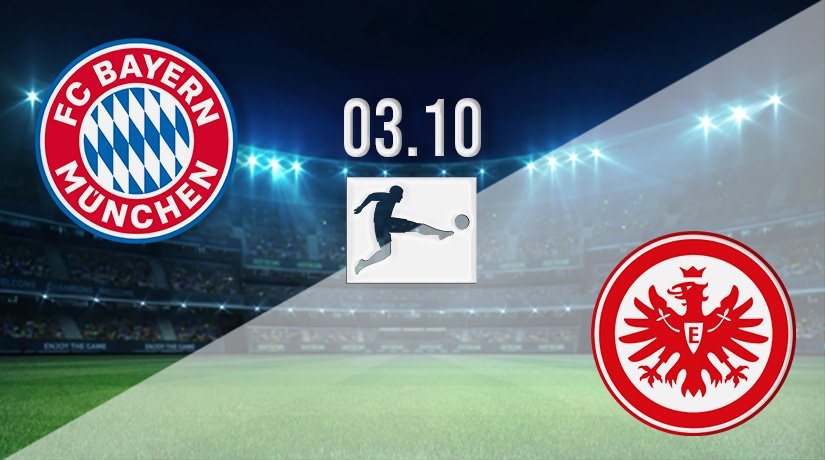 Bundesliga champions Bayern Munich return to the Allianz Arena on Sunday when hosting Eintracht Frankfurt in a league match. This game is scheduled for a 16:30 kickoff and as well as a full house at the venue there will be millions more across Europe following the play. This is the second big match of the week for Bayern Munich following their midweek Champions League involvement but this squad is accustomed to being pushed hard yet still pulling out big performances.

Bayern Munich won the league at a canter last season following a strong finish and they have wasted no time hitting the front this year. The home team were standout favourites with all respected Bundesliga pundits but they must be admired for the way they have got right down to business, wasting no time. They are looking every inch a team good enough to hold their position but know they can take nothing for granted at this level as Frankfurt would love to cause an upset if they take their eye off the ball.

Frankfurt will have painful memories of their last trip to this venue as they were dismantled here last season, losing 5-0 back in October. That was a real lesson for the team but one they appeared to learn quite quickly. Frankfurt won the return match when enjoying home advantage, pulling off a shock 2-1 win in February. Can they do the double or will we see another landslide win for the champions?

Bayern Munich continued a decade of dominance over the Bundesliga when winning the 2020/21 season and have picked up exactly where they left off. FCB can be found leading the way in pole position after six games. The stats of the league leaders shows five wins and one draw with 23 goals scored and only five conceded. Bayern have 16 points on the board from a possible 18 and already enjoy a three points gap over nearest rivals Bayer Leverkusen and Wolfsburg who sit second and third respectively. They are one of only two teams yet to taste defeat with the other being Freiburg down in fifth place.

Munich opened their campaign with a surprise draw as they made something of a false start but the champions had no trouble firing back, getting their season on track by reeling off five wins on the bounce. September began with an important 4-1 away to RB Leipzig before hammering Barcelon 3-0 in the Champions League in Spain. There was more goals to come, destroying Vfl Bochum 1848 7-0 at this venue. The latter was a stunning show of strength but the consistency has been incredible from Munich. In their first four games of September the aggregate score read  17-2.

We last saw Munich in league action a week ago when battering spVgg Greuther Furth 3-1 on the road. That was a match pundits expected them to win and the team lived up to expectations, scoring three points and taking the points without fuss. It was a surprise to see Bayern lose a goal in that game but that strike came on 87 minutes and was scored by on-loan Glasgow Rangers player Cedric Itten.

Frankfurt are without a win

Eintracht Frankfurt are one of only three Bundesliga sides without a win this season. Their stats for the campaign so far shows five draws and one defeat with only six goals scored and nine already conceded. The five points gained leaves Frankfurt down in 14th position, just two places and one point above the relegation zone. Eintracht have been playing some decent football, but a failure to kill teams off and change one point into three has seen them slip down the pecking order. It’s strange to see a team with one defeat sitting so close to the danger zone, but that’s something they must address.

Frankfurt lost their opening game of the season, and fans feared the worst. It was hoped they could find a way to fire back, and they did so by steadying the ship with a draw on matchday two. That was a habit the team managed to get into, and they have now drawn each of their last five league games. Despite being so low in the division, Frankfurt are just three points behind 1899 Hoffenheim, who are currently in ninth place. In this match, a win for Frankfurt would catapult them up the ladder, but defeat could see them slip further into danger.

A week ago, the visitors were last seen on league detail playing out a share with FC Koln at home. That match ended 1-1 thanks to goals from Skhiri, who opened the scoring on 14 minutes before Borre grabbed an equaliser deep into stoppage time at the end of the first half. It may be worth noting that each of Frankfurt’s last five games in all competitions have been 1-1 draws. That run is quite astonishing and is likely to catch the attention of those who love following the trends when making their predictions. Will we see another share of the points here? It wouldn’t be the worst result for Eintracht Frankfurt in this match.

This is a meeting of a team chasing the title and one that looks like it could have a job on its hands fighting off relegation. Bayern Munich have yet to lose a match while their opponents are yet to win a match. That is likely to encourage followers of the Bundesliga into having FCB in their predictions, and the match could go that way. Bayern will be eager to make home advantage count and add another three points to their tally.

Frankfurt may have felt disappointed with some of their recent draws, especially when taking the lead in certain games, but it’s likely they would love to get even a draw from this match. The visitors know the size of the task ahead of them here, and they know even scoring in Munich is a huge ask. Are they good enough to make their hosts sweat?

The pre-match betting on this Bundesliga match has Bayern Munich priced at odds of 1.152 for the win with a victory for Eintracht Frankfurt 14 and the draw 8.6.

Make sure to bet on Bayern Munich v Eintracht Frankfurt with 22Bet!