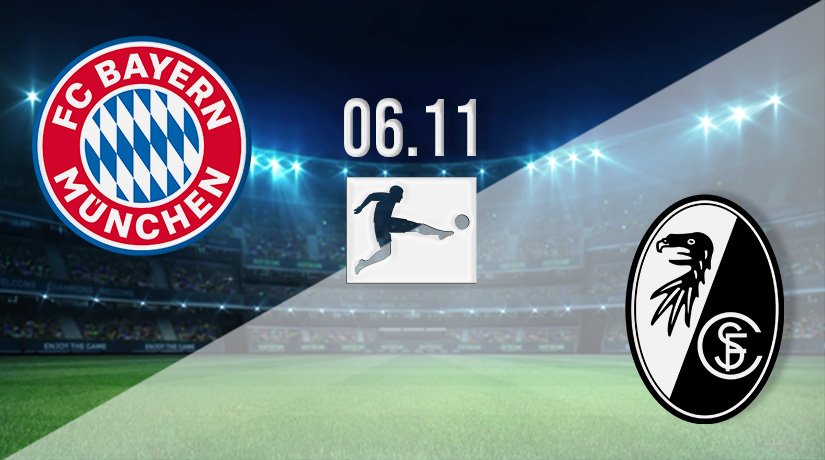 Bayern Munich have scored five goals in each of their last two matches, winning by a 5-2 scoreline in both. Up next are Freiburg step into the Allianz Arena to face the German Champions at 15:30 GMT.

This season, third-placed Freiburg has been impressive. Being three points behind Bayern Munich at the top and five points ahead of fourth-placed Leverkusen places them in an excellent position to qualify for the Champions League next season.

The clash against Bayern Munich will seriously examine the team’s credentials given the free-scoring Bavarians ruthless run of form.

Can Freiburg Cause an Upset?

Freiburg have made an impressive start to the 2021/2022 season with six wins and four draws. Christian Streich’s men are the only team in the Bundesliga still unbeaten.

The statistics highlight the season’s fantastic start; while Freiburg has scored 17 goals (the least in the current top four teams), they have conceded only seven, the best defensive record in the league.

This sets up the match at the Allianz Arena as the best attacking team in the Bundesliga, Bayern Munich, with 38 goals against the best defensive unit in the league, Freiburg having conceded only 7 goals.

Fresh from a thumping 5-2 win over Benfica in the Champions League, Bayern Munich turn their attention to the visit of Freiburg.

The Bavarians are no slouches at the back, having conceded 10 goals only, three more than Freiburg. In Robert Lewandowski, Bayern Munich have a massive goal-scoring machine, as underscored by his hat trick against Benfica in midweek.

Julian Nagelsmann sets his sight on extending the lead at the top of Bundesliga, which is currently tight given only a point separates Bayern from second-placed Dortmund with 24 points.

In the last five Bundesliga outings, Bayern Munich have won four and lost one. Notably, they suffered the humiliating and surprising 5-0 defeat to Monchengladbach in the DFB-Pokal second round, which perhaps showed the Bavarians to be human beings after all.

Overall, the Bavarians have been in fine form, plundering 38 goals this season while letting in only 10. This leaves them with a commanding goal difference of 28 compared to second-placed Dortmund’s +12 goal difference.

In their last five outings, Freiburg have won four and drawn one match. Dropping only two pits in the last five has propelled them to third place on the Bundesliga table.

Freiburg are also unbeaten in their last four away matches with three wins and a draw collecting 10 points in the process. The draw was a 0-0 stalemate at Mainz.

At home, Bayern have won four and lost one of their last five matches, collecting 9 points in the process.

The form guide indicates that the two sides are flying in the Bundesliga at the moment. With only three points separating first from third, this promises to be a massive test for both sides and their credentials this season.

The only injury absentee that Julian Nagelsmann will have to worry about is Eric Maxim Choupo-Moting. The 32-year-old has been missing from action since October 25th with a muscle injury. He has missed three matches so far, and the Freiburg fixture will prove to be too soon for a return.

Despite a squad free of injuries and suspensions, other than Choupo-Moting, Nagelsmann will have to contend with the workload for his players, especially after playing in midweek against Benfica.

This is especially important since Freiburg have had the entire week to prepare their game plan for this match.

The right-back Jonathan Schmid tested positive for COVID-19 and has missed 8 matches so far this season since September 9th. He is not expected to be back for the Bayern match.

After his immense performance against Benfica in the Champions League, ending the match with the hat trick and the match ball, Lewandowski is the undisputed danger man for Bayern Munich.

His goal scoring ensures that the spotlight will always be on him in matches. This also means that he is likely to be decisive in matches for the Bavarians.

In this match, coming up against Freiburg’s organized defense, Bayern will need Lewandowski at his best to stand a chance of taking all three points.

Given Bayern Munich’s free-scoring form, the chances are that Freiburg will need their striker Lucas Höler in inspired form.

Lucas Höler has been crucial for Freiburg this season with some vital goals. He is likely to be the point man charged with the responsibility of breaching the Bayern defense and notching a decisive breakthrough in what promises to be a tough match.

Expect Bayern Munich to start this match with a high tempo, pressing Freiburg across the pitch, maintaining possession, and launching attacks down the wings and through the middle players – Muller and Lewandowski.

Expect Freiburg to seek to keep Bayern from scoring for as long as possible, absorb the pressure, and seek fashion patterns of passage that will help them maintain good possession and pose a danger to Bayern.

Bayern are in imperious form and are expected to inflict Freiburg their first defeat of the season and take all three points.

Make sure to bet on Bayern Munich vs Freiburg with 22Bet!