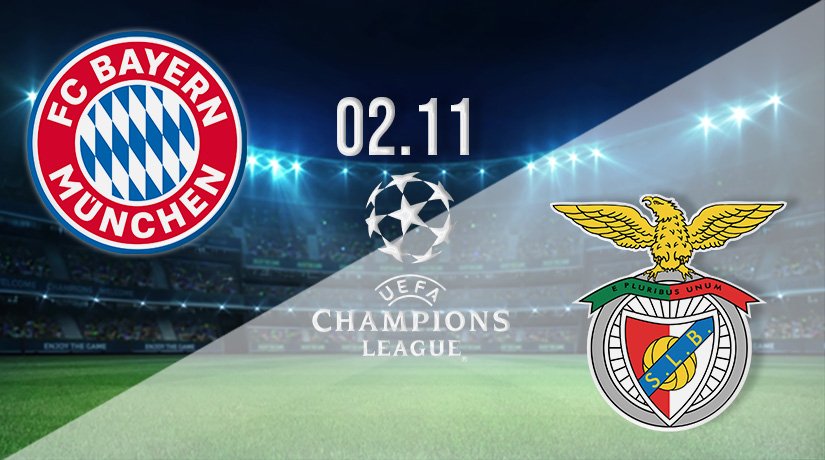 Bayern have looked every bit the European giants they are in this group. They have romped to the top of the table in Group E by beating all comers, including a 3-0 win at Camp Nou and a 5-0 defeat of Dynamo Kyiv.

Benfica have been the group’s surprise package, losing only to Bayern Munich and occupying the second spot in the group that many expected to be Barcelona when the draw was made.

In the first leg, in Portugal, Julian Nagelsmann’s men were impressive 4-0 winners at Benfica. A victory against the Portuguese outfit will see Bayern book their place in the competition’s knock-out stages.

Losing 5-0 to Borussia Monchengladbach demonstrated that Bayern Munich are human, after all, but the Bavarians have been imperious in Europe so far this season, which means Benfica face a daunting task at the Allianz Arena.

Bayern have scored 12 goals in the group stages so far, the best in Europe. Alongside Juventus, Bayern have also not conceded a goal.

In the lead-up to this match, the Bavarians hammered Union Berlin 5-2, with goals from Thomas Muller, Kingsley Coman, Leroy Sane, and Robert Lewandowski (2), continuing their impressive domestic form.

Can Benfica Do The Impossible?

After losing 4-0 at home, Benfica face the massive task of breaching an impenetrable defense and managing a shut-out against an irresistible attack.

In the lead-up to this match, Benfica were held by Vitoria Guimaraes to a 3-3 draw and another 1-1 stalemate against Estoril.

With two victories in their last six outings, Benfica have had a less than ideal preparation for this clash at the Allianz Arena.

This season, Bayern Munich has had a flawless beginning to their European campaign with three wins out of three, scoring 12 goals, and keeping three clean sheets.

In all competitions, the Bavarians have managed four wins and two losses.

Benfica has won two, drawn two, and lost two matches in all competitions.

Andre Almeida was withdrawn in the first encounter between the two teams and remains a doubt for Jorge Jesus’s men.

The full-backs, Valentino Lazaro and Gil Dias, also remain sidelined with injury, which means they will not be available for selection at the Allianz Arena.

Benfica are expected to be without Rodrigo Pinho and Haris Seferovic in the forward areas as they step up their recovery from injury.

Roman Yaremchuk was withdrawn from the action at the weekend after 45 minutes; however, this is thought to have been for tactical reasons, which means he is available for selection.

Bayern suffered some knocks during the match against Union; Leon Goretzka has a bruised heel while Lucas Hernandez did his knee in the Bundesliga action.

Two players are on the verge of suspension for Bayern, with Dayot Upemecano and Hernandez potentially missing the Dynamo Kyiv clash if they get booked.

In other areas, Bayern has all their players fit and ready for selection. Jamal Musiala and Serge Gnabry are pushing hard for inclusion in the starting 11; however, Nagelsmann is unlikely to change such a settled and effective team.

The Benfica center-back pairing will be busy against Bayern Munich. For Benfica to stand a chance of taking anything away from the Allianz Arena, they will need to keep the Bayern attack quiet for long periods.

Otamendi and Vertonghen have the experience from their English Premier League years to stand up to the challenge and give Benfica the platform they need to go ahead and have a successful match.

Given that this attack handed them a 5-0 hiding in the first leg, the two center backs are in for a tough evening.

There is no surprise that Lewandowski will be the key focus of many watching the match on Tuesday. He is one of the deadliest players in and around the box in the world at the moment, a man for the big occasion, and a scorer of big goals.

Benfica will do well to keep him quiet at Allianz Arena. Although the Bavarians have multiple threats in their forward line, such as Sane, Muller, and Coman, Lewandowski is the biggest headache that Otamendi and Vertonghen will face all afternoon.

His movement, playmaking, and sharp finishing are central to the functioning of the Bayern attack. He connects and dovetails effectively with Sane, Coman, and Muller, making the Bavarians’ attack lethal.

Expect Bayern Munich to start this match in their relentless pressing, high-octane, and fast-paced approach to their game.

The pressing and counter-pressing from Bayern has been effective, forcing teams into mistakes and gaining possession of the ball as high up the pitch as possible to set attacks,

The home atmosphere will be electric, and the players will respond accordingly. Benfica will have to find a way to absorb the early pressure and settle the game’s tempo down to stand a chance of emerging unscathed.

Benfica will seek to remain solid and compact with quick passes from the back and fast counterattacks.

However, as highlighted in the 5-0 scoreline from the first leg of this fixture, the Bavarians have indisputable quality. Bayern will take all three points in a comfortable evening’s work.

Make sure to bet on Bayern Munich vs Benfica with 22Bet!