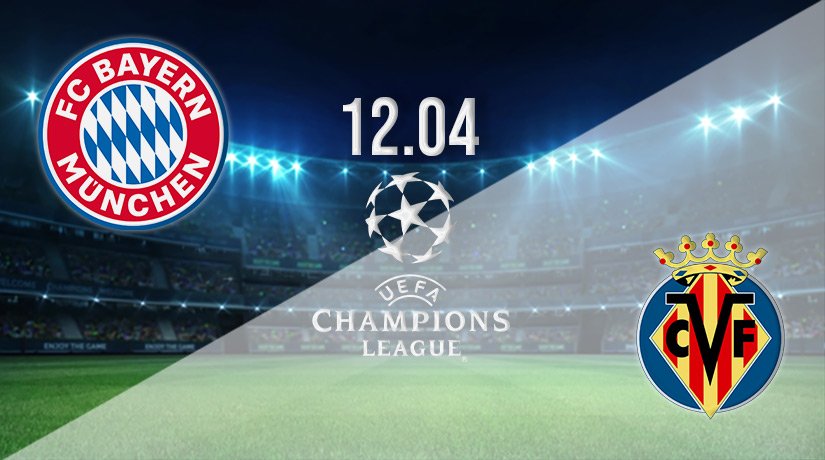 Another week of football fixtures and another exciting round from the UEFA Champions League. We get underway on Tuesday with two quarter-finals second leg matches from Germany and Spain. Real Madrid host Chelsea in what promises to be a thrilling match as the record-holders take on the current champions, with Real Madrid holding a 3-1 aggregate lead, but Chelsea are refusing to throw in the towel. We focus on the other match that kicks off at 20:00 GMT, where Bayern Munich welcome Villarreal with the La Liga side holding a slender 1-0 lead.

There’s all to play for here, and this match is expected to go right down to the wire. Bayern Munich find themselves a goal down on the scoreboard but now has the home advantage and will be eager to make it count. This is a must-win match for the German Bundesliga champions, but they can’t afford to go out all guns blazing. Any attempt to blow a well-organised Villarreal side out of the water leaves FCB open to the counter-attack. The locals know if they lose the first goal in this game, a difficult tie becomes near impossible to get through. Bayern Munich must be smart in their approach and ruthless in attack.

The stats sheet show these teams have met three times in the past, with Bayern Munich holding a narrow lead on the head to head stats. The Germans have two wins against the one recorded by Villarreal in the first leg. The last time these sides met in Germany, Bayern Munich ended with a convincing 3-1 victory back in 2011 and will be after more of the same here. Will Munich overturn that first-leg defeat in Spain, or can Villarreal keep punching above their weight and record another memorable victory to progress to the semi-final?

Bayern Munich were the most impressive side during the group stages of this competition, ending on top of Group E with a 100% record from their six matches. FCB posted stats of six wins from as many starts with 22 goals scored and only three conceded. That made them one of only a few sides with an unbeaten record, with Ajax and Liverpool the only other two teams to win all their group fixtures. It served as a statement of intent to the rest of the competition and encouraged many pundits to mark Munich as the team to beat this season.

Since progressing to the knockout stages of the Champions League, we’ve seen Bayern Munich hammer Red Bull Salzburg 8-2 on aggregate. The interesting stat about that landslide win over the Bulls was that the first leg in Salzburg ended in a 1-1 draw before Bayern Munich opened up when at home, winning 7-1 to progress. In the quarter-finals, the Germans would have been disappointed not to get on the scoresheet and to lose the match, but they are experienced enough to know that the tie isn’t over yet. There’s still plenty of life left in this fixture, and there’s no reason FCB can’t do the same to Villarreal as they did Salzburg.

Bayern Munich warmed up for this clash with a weekend win over FC Augsburg in the Bundesliga. That match was rather more competitive than most followers of German football had expected, with the winning goal scored by Lewandowski from the penalty spot with 82 minutes on the clock. Bayern know better is required here, but that win on Saturday had a feel of a team with one eye on this fixture, doing just enough to continue their winning ways in the league.

Villarreal aren’t through yet

Villarreal came into this competition as the winners of last season’s Europa League and were expected to be blown away. They beat Manchester United in the final last year and also met the Red Devils in the group stages of this competition. The La Liga side have found themselves written off at every turn this season, but they have continued to grind out results and silence their critics. They won’t be thinking about winning the trophy just yet, but their confidence will be growing.

They claimed a spectacular 1-0 win over Bayern Munich in the first leg with the goal scored by Danjuma inside the opening eight minutes of the match. It was a spectacular start and one that rattled the Germans, but Villarreal will be eager to remain grounded. Nothing has been achieved yet, and if they allow their view to move ahead to the semi-finals and who they could play, Villarreal could find themselves on the wrong end of a harsh lesson.

Villarreal have reserved their best efforts for the Champions League this season, with their domestic form playing second fiddle. A look at the La Liga table shows that the visitors are down in seventh place, clinging on to a Europa League slot for next season. Their only hope of playing Champions League football in the next campaign is to lift this trophy and go in as defending champions. Villarreal have won one, lost three and drawn one of their last five league starts.

Bayern Munich will be cheered on by a huge support who understand their team must fight for a place in the semi-finals. They find themselves behind on the aggregate score, but FCB have been here in the past, and this is when their big match experience comes into play. They know exactly what is expected of them on Tuesday.

Villarreal have been poor in Spain this season, but we shouldn’t judge their chances in this competition on their efforts in La Liga. They are an ambitious bunch of players who have no issues turning it on when it matters, and followers will see Villarreal raise their game when this match kicks off. They are in a great position but not yet through.

Make sure to bet on Bayern Munich v Villarreal with 22Bet!