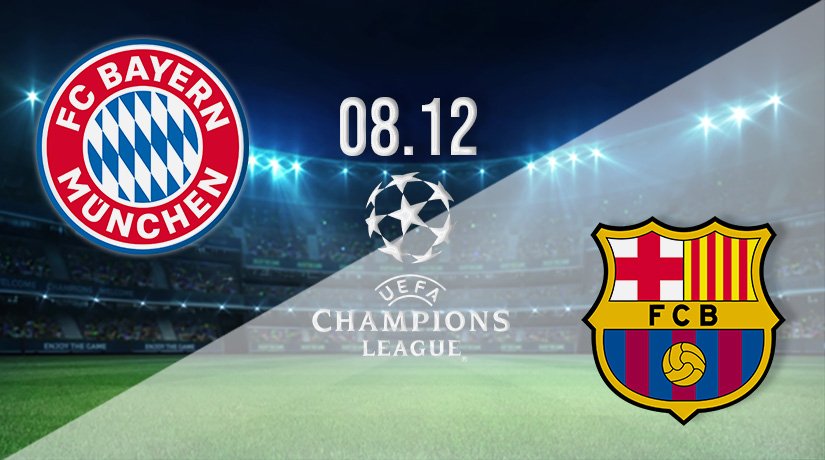 The Champions League fixtures continue on Wednesday evening, with the remaining eight group matches on the schedule. Each match will be shown live on television, and with the major places of several groups still undecided, it promises to be a fascinating evening for armchair fans.

One of the main events of the card comes from Germany, where Bundesliga champions Bayern Munich welcome Spanish La Liga giants Barcelona in Group E.

The home team are already home and hosed, securing their place in the knockout rounds of the competition with time to spare. FCB boast a perfect record and will win the pool regardless of the outcome of this match.

That may persuade the locals to rest a few of the star names from the home dressing room with one eye on the hectic schedule that is fast approaching. Barcelona is currently in second place and can’t win the pool, but they could drop to third if results go against them.

Bayern and Barca have met a dozen times in the past and have served up some memorable games, but it is the German team that holds the lion’s share of victories.

The locals are currently on eight wins against the two of Barcelona with another two draws. Bayern won 3-0 in Spain earlier in this group and will feel they have the measure of their opponents, but how seriously will they take this challenge? We’ll find out here.

Bayern have been perfect

Bayern Munich has been punch perfect so far and sits proudly atop Group E with a 100% record. The Bundesliga champions were always the favourites to come through the group and keep their dreams of winning the Champions League trophy alive.

Still, few experts predicted they would run out almost unchallenged and record a perfect record. Heading into this match, FCB have 15 points on the board from a possible 15, have scored 19 goals and conceded just three.

Munich is the team to beat at this level, and that form would have caught the eye of a few other big names. No side will welcome a match with Bayern in the next round of the Champions League. When taking a closer look at their numbers for the season, we see Bayern are the Champions League’s top scorers with those 19 goals, two better than Manchester City.

In defence, no team has conceded fewer goals at this stage. Bayern is looking great value for their group win, but they are also every inch a title contender at this stage and will be more than a match for the likes of Man City and PSG.

Their most recent win in this competition came in the form of a hard-fought 2-1 away to Dynamo Kyiv before beating Arminia Bielefeld 1-0 at home in the Bundesliga to finish November in style. So far in December, FCB has played only one game, beating Borussia Dortmund 3-2 on the road in what was a thrilling contest.

Confidence is high in the home dressing room, and there can be no doubt that if their minds are on the job, Bayern Munich has enough quality to win this game.

Barca still have work to do

Barcelona fans have endured a rocky few months off the field of play, and things haven’t been any more settled on the pitch. Since losing star man Lionel Messi to PSG in the summer in a desperate attempt to balance the books, Barca has struggled domestically and in the Champions League.

They start most European competitions as one of the early favourites to win the trophy. Still, this year things were different with Barca way down the pecking order in a list of potential champions drawn up by football pundits.

The visitors lost their opening two games but steadied the ship and are now unbeaten in their last three games. Barca’s form to date reads two wins and one draw against two defeats, and although a trip to Munich is never encouraging, the Spaniard’s do have reasons to be hopeful of pulling off an upset.

Their recent improved form has lifted them to second in the table, two points ahead of Benfica, who play bottom club Dynamo Kyiv at the same time as this match is going on.

Barcelona’s last Champions League match ended in a goalless draw at home to Benfica, and if they fail to come through this group, fans will look at a failure to score in that game as the reason.

Since that 0-0 at home, Barca has beaten Villarreal 3-1 on the road in La Liga before suffering a shock 1-0 home defeat against Real Betis at the weekend. It’s a difficult time to follow Barca as they are unpredictable and may be enjoying playing away from the pressures of the Camp Nou.

Bayern Munich have the home advantage, already hold a win over Barca in this group, and there’s a real chance of them going through as pool winners with a 100% record. If they have the motivation to finish the job now, they are through to the knockout rounds.

There’s no doubt FCB are good enough to get the win over a desperate opponent.

Barcelona knows they could end up finishing third in this group and dropping into the Europa League, and that would be another kick in the teeth for their fans.

They aren’t as strong as they were last season, but there’s no doubt Barca should have already come through this pool by beating Benfica at home. Another draw may be enough, but they won’t want to leave anything to chance.

Bayern Munich is priced at 1.63 with 22bet to win this match, or there’s 4.32 available to those who would rather have their stake money on Barcelona. The draw is 4.8.

Make sure to bet on Bayern Munich v Barcelona with 22Bet!