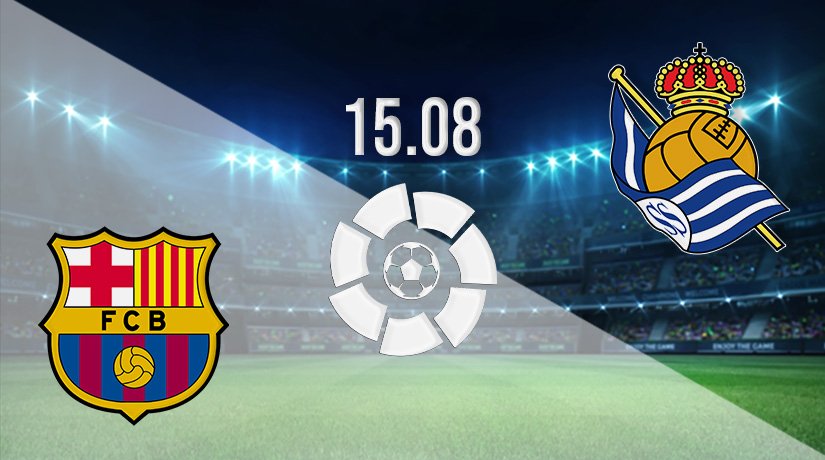 A huge week of club football action across Europe continues on Sunday, with the Spanish La Liga and English Premier League just two of the many competitions scheduled. Barcelona have made the headlines already this week when the news broke that a tearful Lionel Messi will exit the club and a move to PSG looks to be on the cards. Will the team cope with losing the best player in the world in many people’s eyes? As the pressure is now on the board, they’ll have to start balancing the books, or restrictions could hit them.

The players selected to take part in Sunday’s home match against Real Sociedad must block out the noise in the background and focus on the only thing they are in control of, which is playing football. Barcelona enjoy the home advantage over Real Sociedad on matchday one of the new La Liga season, and they will be desperate to get off to a perfect start by bagging all three points.

Will they achieve that, or can Real Sociedad ramp up the pressure with an away win? The stats associated with this fixture show Barcelona and Real Sociedad faced off three times last season in La Liga and the Spanish Super Cup.  Barca were unbeaten in those three games, winning two and drawing the spare. The three games produced a total of 12 goals, and armchair fans hope this renewal follows that trend and throws up plenty of goals and even more talking points.

Barcelona must rally this season following recent setbacks. In addition to the pain of losing Lionel Messi, which is expected to happen in the coming days, the club must respond to a terrible season by their own high standards. Barca finished the last term down in third place behind Atletico Madrid, who were surprise La Liga champions, and old rivals Real Madrid who finished second in the league. Fans understand the troubles faced by the club this term, but they will demand the players on the field give nothing less than their all for the cause. Messi may be away, but supporters will be unwilling to drop their standards.

Manager Ronald Koeman faces the toughest season in recent memory for a leader of this great club, but there’s no reason why they can’t improve on last season’s third-place finish and get much closer to the pole position. They ended the last term in third with 79 points on the board, which was seven fewer than Atletico Madrid, who caused a massive upset by snapping the dominance of Spain’s big two. Barca posted stats of 24 wins against seven draws and seven defeats, scoring 85 goals and conceding 38. There’s plenty to work on there, and the players will want to get off to a winning start.

Barcelona has the home advantage for this match despite their off-field problems and the better squad on paper. They will be backed by a huge audience who will be eager to cheer their team to a winning start and three vital La Liga points. The best way to silence their critics is to get the points but also put on a show when doing it. Barca must prove on week one they are genuine contenders for the title.

Sociedad hoping to pile on the pressure

Real Sociedad will be well aware of the problems faced by their opponents off the field of play this week. They will take encouragement from that, but no one camped inside the away dressing room will be foolish enough to believe Barca are there for the taking. Instead, they will realise their hosts are an injured animal, one desperate to show their teeth and prove there’s still plenty of fight left. That makes Sociedad’s job even more difficult. They must come to the Camp Nou and be prepared for the early onslaught that will come from their opponents in the opening exchanges of the game.

Sociedad will be prepared to spend long periods of this match without the football and must keep their shape under pressure. Both teams are lacking match fitness following a summer break and will be a yard off the pace as a result, but if Sociedad are to have any chance of taking at least a point from this game, they must keep unforced errors in the middle of the park to a minimum. The longer they can keep this match goalless, the more frustrated the home crowd will get, which will filter down to the players.

There were much easier opponents available to Sociedad in the opening game of the season, and the fixture list has been quite hard on the visitors. Still, you won’t see anyone in the away team ready to throw in the towel and concede defeat. Real Sociedad knows Barcelona are weaker this year than they were last, and that will encourage them to come and have a go at catching them cold.

There has been much talk over the last few days of the problems faced by Barcelona and how they will survive without Messi to rely on, but critics are forgetting they have never been a one-man team. Yes, Messi is a game-changer, a player that can turn matches in the blink of an eye, but the home dressing room is packed full of world-class talent. Not only that, it’s packed with players who will want to prove they are the future stars of the team.

Real Sociedad almost have nothing to lose here. They have been dealt a cruel hand, but the focus during the build-up to this clash has been on their opponents. Sociedad can come to town and enjoy the occasion, aiming to make life as difficult as possible for the locals.

The pre-match betting odds available at 22bet on this match has Barcelona priced at 2.3 to win the game with Real Sociedad 4.44 and the draw 2.4.

Make sure to bet on Barcelona v Real Sociedad with 22Bet!