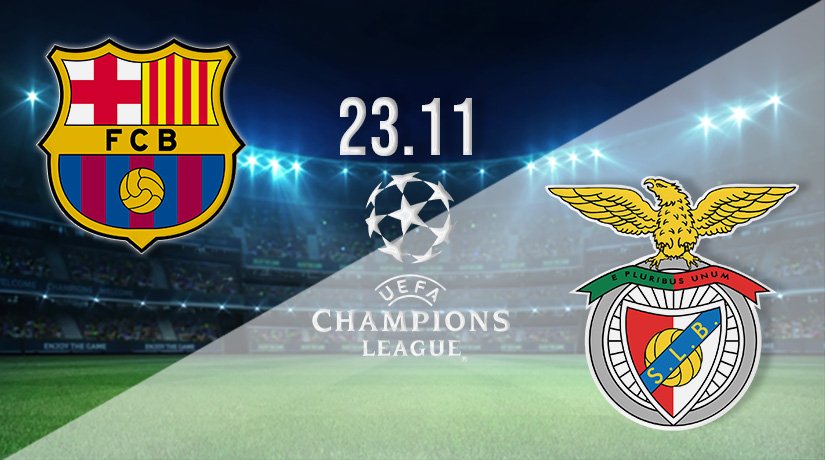 It’s the penultimate round of matches from the UEFA Champions League group stages and an exciting round lies ahead for followers. Tensions will be running at boiling point as teams battle for position, hoping to keep their dreams of reaching the knockout stages alive.

Barcelona has already suffered a challenging campaign, losing Lionel Messi but those left behind are desperate to prove that there’s life after the Argentinian who is now on the books of French side PSG.

Barca enters round five with stats of two wins against two defeats. The Spanish giants failed to claim any of the first six points available to them but bounced back. They are now in the running for a top-two finish and place in the next round thanks to back to back wins.

If they win this match they will progress behind runaway leaders Bayern Munich but to achieve that they must defeat a Benfica side that travels to Spain knowing anything less than three points would spell the end. They’ll be determined to give themselves a fighting chance.

These teams have met eight times previously and the stats sheet tells us to prepare for a competitive contest. The head to head scores shows the Spaniards hold a slight edge with Barcelona sitting on three previous wins against the two of Benfica and three draws.

Benfica did win the reverse earlier in this group campaign and they claimed all three points with ease, strolling to a 3-0 victory. The goals that day were scored by Rafa and a Darwin Nunez double with Eric Garcia sent off for the beaten side. Will Barca get their revenge to go through or will Benfica do the double?

Barcelona may have started this campaign slowly, losing their opening three games but they are finally firing and enter this home match on the verge of completing a hattrick. Three wins on the bounce from five games would secure their place in the next round, allowing Barca to prepare for the knockout stages, achieving the least fans expected of them this season.

They are second in the group with two defeats and a pair of wins, scoring only two goals while conceding six. The goals against tally will be a cause for concern for everyone at the club but they are improving.

Barca got off the mark in this group when bagging their first win last month, beating Dynamo Kyiv 1-0 at this venue. The winning goal that day was scored by Pique on 36 minutes. It wasn’t the most impressive Barcelona have ever been in this competition but it was enough to bag the win and claim a crucial three points.

Their next victory was another 1-0 when beating the same opponent by the same score on the road. This time the goal was scored by Fati Vierra on 70 minutes. Another slog but another win.

Since beating Kyiv in this competition, Barcelona have played twice in La Liga where their recovery has continued. They drew 3-3 away to Celta Vigo despite racing into a 3-0 lead in that match, conceding an equaliser deep into stoppage time.

They were last seen in action beating Espanyol 1-0 at home on Saturday thanks to a goal from Depay who rifled home from the penalty spot early in the second half.

It’s win or bust for Benfica

Benfica head to Spain, aware of what they must do to keep their dreams alive. They know victory here is a must, and anything less would see them exit the competition at the earliest opportunity. They also know the size of the task that awaits them in needing to win at the home of the mighty Barcelona, but Barca isn’t as mighty as they once were.

Suppose there was ever a time Benfica could have chosen for needing to beat Barcelona. It would have been now. The home team is a work in progress and not nearly as strong as they were this time 12 months ago.

That defence must improve if they are to have any chance of getting three points from this game, but the fact Barca have been nicking 1-0 wins of late suggests the backline has half a chance of keeping things tight. This game won’t be won in attack but in defence.

The visitors arrive in Spain on the back of two defeats in their last two Champions League games, which would have done little for their confidence, but the fixture list has been tough on them, playing group leaders Bayern Munich two games on the bounce.

Zero points were expected of them, and they lived up to that. Another win over Barca, like they achieved in the reverse of this fixture back in summer, would help put those defeats behind them.

If we forget about Barcelona’s shaky start and concentrate on the recent form, they have a new manager, are on a decent unbeaten run and have won each of their last two in the Champions League.

They also hold the home advantage for this match and know if they avoid a defeat, they will book second place behind Bayern Munich. They hold all the aces.

Benfica beat Barca in convincing fashion earlier in this group, and although that was a far less confident side than they’ll face here, it will fill the away dressing room with confidence. If they get the first goal in this match, it will rattle their hosts, and there’s still no telling how the home defence and the new manager will respond.

Barcelona are the hot favourites to win this match with 22bet offering odds of 1.64 against Benfica, who are 4.88 for an away win and the draw 4.2.

Make sure to bet on Barcelona v Benfica with 22Bet!