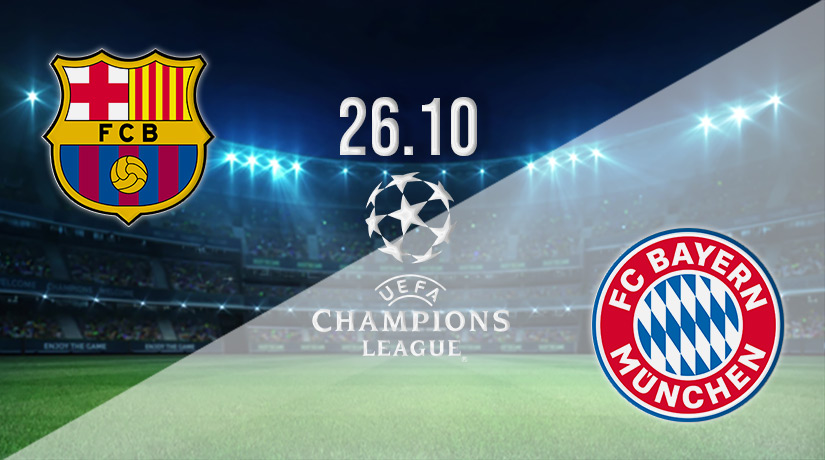 Champions League football is back at the Camp Nou this midweek as home team Barcelona welcomes another giant of the competition in Bayern Munich. Here we have a game involving one of the biggest teams in Spain against the biggest team in German football. With the La Liga outfit enjoying home advantage and the backing of their loyal support, this promises to be a competitive contest. Barcelona v Bayern Munich is a fixture that’s good enough to be a Champions League final later this season, meaning fans are spoiled when it comes to matchday five of the group campaign.

Barca and FCB meet in the fifth round of matches from Group C, where the visitors sit on top of the pool with a maximum haul of points from their first four outings. The hosts won their first match but are without a victory since, claiming just one of the last nine points on the table. That form will worry everyone with an allegiance to Barcelona, and the arrival of the group leaders and German Bundesliga champions will create fear in the stands. Fans will be out in force to support the home win, but getting it is a completely different matter.

As you can imagine, Barcelona and Bayern Munich have met more than once before with the teams used to fighting for success in Europe. The players will be familiar with each other, using their strengths and weaknesses against them. The head-to-head stats show the pair have met 14 times already, with Bayern Munich claiming ten wins against the two of Barcelona, with the other two games ending in a draw. The most recent clash was played in Germany last month when Bayern Munich strolled to a convincing 2-0 victory on a day when it could have been more.

It was a surprise to see Barcelona start the season so well, and they are in the mix with current La Liga champions Real Madrid to contest the crown. They also got off to a winning start in their Champions League Group C campaign when scoring an opening night victory over Viktoria Plzen at this venue. That was a match they were the favourites to win, bagging all three points against a side expected to struggle at this level, and the players lived up to expectations and then some. Barca won 5-1 to kick things off in style. Fans hoped that result would be a sign of things to come, but as it stands, it was their last win of the tournament.

The home team enter this match with their stats stuck at one win, one draw and a pair of defeats, scoring eight goals but conceding seven. The four points gained is much less than supporters would have expected at this stage, but the team isn’t out of the running just yet, and they remain in with a shout of finishing second. They have Bayern Munich in first place, already eight points off into the distance. Inter Milan is second on seven points, but they play bottom club Plzen, a team without a win with -13 in their goal difference tally already.

The home team lost back-to-back games before holding on for a draw against Inter Milan in their most recent outing. Avoiding defeat kept them in the mix for second place but if the results go against them in midweek, Barcelona will have to settle for third place and a spot in the Europa League. That would be bitterly disappointing for a club with a rich history of winning this trophy and challenging in the later stages. This is a must-win home match for Barca.

Munich are home and hosed

When Bayern Munich won the Bundesliga again last season, tightening their grip over German football, most pundits expected them to follow it up with success in this tournament. Manchester City and Bayern Munich were the two early leaders in the opinion of the most respected pundits and not too much has changed on that front since. The Germans are looking well after four games played and they are yet to hit top gear. You will often see the best teams simply going through the motions during the group games, keeping their best for when it matters in knockout football.

FCB are in pole position and complete control of Group C. They have a perfect record of four wins from as many starts, scoring 13 goals while conceding only two at the other end. The dozen points gathered puts them five above nearest rivals Inter Milan and anything better than a defeat in this match will secure top spot for the Germans. Although it’s highly unlikely we’ll see them tumble from the summit between now and the finish line.

The visitors warmed up for this trip to Spain with a weekend win over Hoffenheim on their travels. Again, it was a match they were expected to win but that takes nothing away from the players who continue to churn out wins and big performances, taking the added pressure in their stride. Munich secured the points that day thanks to goals from Musiala on 17 minutes and Choupo-Moting before the interval. That match was won in the first half, allowing Bayern to make changes and rest some of their regulars for this trip.

If Barcelona fail to win this match at the Camp Nou and Inter Milan do as expected and beat Plzen, it will be curtains for their chances of going through. The Spaniards will drop into the Europa League with a game to spare and that will infuriate supporters as their side have barely made an impact on the competition. It’s changed days for supports.

Bayern Munich are the best team in this pool and look to be one of the best in the competition, with a great chance of lifting the Champions League trophy. If they are at their best in Spain, they can maintain their perfect record.

The pre-match betting odds available at 22bet on this match has Barcelona trading at 2.264 with the draw 2.816 and Bayern Munich chalked up as a 3.9 option.

Make sure to bet on Barcelona v Bayern Munich with 22Bet!