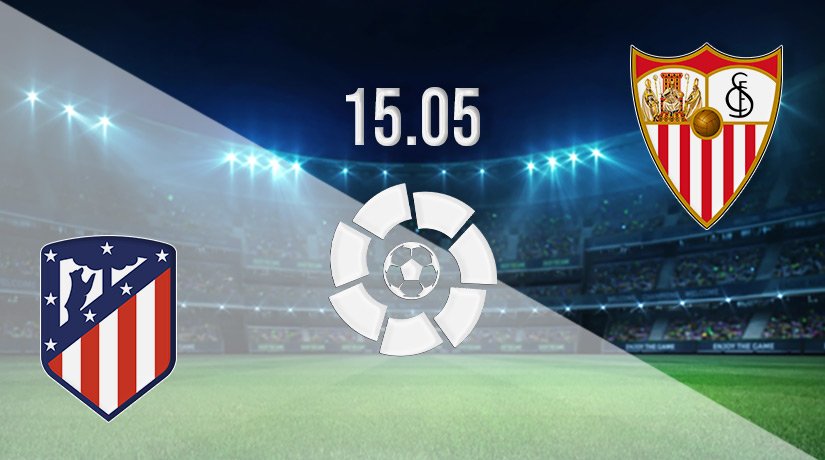 La Liga’s third spot on the table will be up for grabs when Atletico host Sevilla at the Wanda Metropolitano stadium on Sunday at 18:30GMT as third takes on fourth with two matches remaining in the league.

Can Atletico make it Three Wins on the Bounce to Seal their Top Fourth Position?

Atletico Madrid are on the verge of sealing their spot in the top four and qualifying for next season’s Champions League.

The clash with Sevilla will be a winner takes all, with the side emerging victorious likely to finish third, whereas the losing side have to win the final match to avoid being overtaken by fifth-placed Real Betis.

After victories over Real Madrid and Elche after the 2-0 reverse against Athletic Club, Atletico bolstered their top-four credentials and will seal their place with a win at home to Sevilla on Sunday.

Can Sevilla get back to Winning Ways after Three Consecutive Draws in L Liga?

Sevilla have dropped six points in their last three outings in the league after three consecutive draws.

This run of form has seen Sevilla drop down to fourth on the table with 66 points, one point behind third-placed Atletico Madrid and five ahead of fifth-placed Real Betis in fifth.

This means that Sevilla have to win one more match if they are to ensure that they will finish the season within the top four.

Atletico Madrid’s form has been stop-start in the last six outings in La Liga; they have suffered two defeats in this run; 1-0 against Mallorca and 2-0 and Athletic Club.

Diego Simeone’s side have collected 10 points and dropped eight in the process with three wins, one draw, and two defeats in the process.

With two matches remaining in the La Liga season, Atletico need at least a draw to seal their top-four spot heading into the final two matches.

Sevilla have lost just once in the last six matches in La Liga in the 3-2 reverse against the eventual champions Real Madrid.

They have won twice, drawn three times, and lost once in this run, which means they have collected nine points and dropped nine in the process.

Sevilla go into the clash with Atletico needing a win to seal their position within the top-four.

Diego Simeone will be without second striker Joao Felix who is recovering from a muscle injury; the 22-year-old has missed four matches since he was sidelined with injury on April 18th, 2022.

Atletico will also be missing the services of attacking midfielder Thomas Lemar in the clash with Sevilla; the 26-year-old Frenchman is also recovering from a muscle injury he suffered on April 18th, 2022.

Centre-back Felipe will also miss the match on Sunday with indirect card suspensions since April 14th.

Sevilla will be without the services of experienced defensive midfielder Fernando for the match at the Wanda Metropolitano; the 34-year-old is recovering from an ankle injury and is expected to be back fit by July 1st.

Centre-back Karim Rekik is also a major doubt for the clash with Atletico on Sunday. The 27-year-old is recovering from a muscle injury and is expected to be fit at the beginning of July.

The France international has not been able to hit the heights he achieved before moving to Barcelona; however, his time back at Atletico has been productive with seven goals and five assists in 33 appearances for Diego Simeone’s side.

Griezman will be crucial for Atletico as they seek to seal their top-four spot on Sunday.

The striker has 10 goals in 41 appearances for Sevilla this season. He will be crucial as Sevilla seek to win away at Atletico and ensure that they qualify for next season’s Champions League.

Atletico will adopt their typically high-energy and compact approach to the match. Sevilla will seek to dominate the tempo and possession by taking the initiative against Diego Simeone’s men.

This match is highly likely to end in a draw.

Make sure to bet on Atletico vs Sevilla with 22Bet!