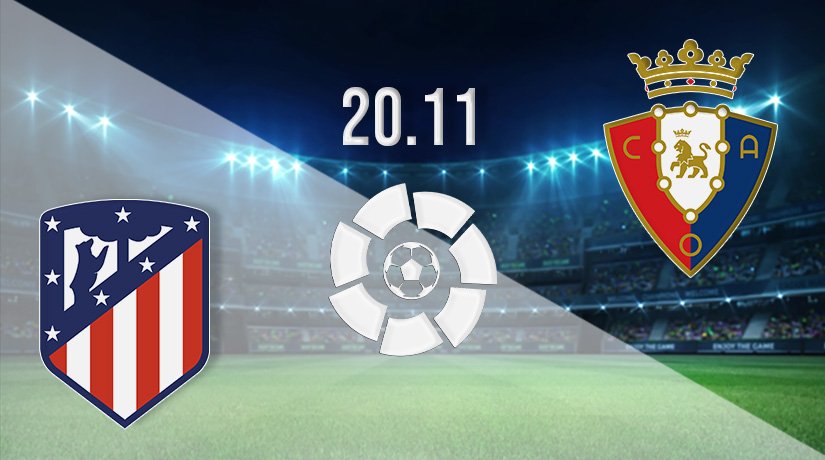 La Liga champions, Atletico Madrid, welcome Osasuna to the Wanda Metropolitano Stadium on Saturday at 18:30 GMT, as they seek to put their title defense back on track.

Atletico have fallen off slightly from the title race after the 3-3 draw at Valencia, allowing Sevilla to leapfrog them into third, and Real Sociedad to expand the gap between them to 5 points.

Osasuna sit comfortably in mid-table with 19 points and 8 points from the drop zone.

Can Atletico Pick Up the Pace in the Title Race?

With Barcelona falling off from the title race so far this season, the competition for Atletico’s title is shaping up to include league leaders Real Sociedad, traditional powerhouse Real Madrid, and third-placed Sevilla.

Diego Simeone’s men will have to be more ruthless at home to enhance their title credentials. Although they are unbeaten at the Wanda Metropolitano this season, they have dropped nine points in three draws out of their six home outings.

Can Osasuna Kick On and Break Into the European Places?

Osasuna are just four points behind Atletico, albeit having played one more match than Los Rojiblancos, at 7th on the La Liga table.

After an impressive start to the season, with five wins and four draws, and suffering four losses, Jagoba Arrasate’s men are already building on their 11th place finish last season.

Visiting the home of the champions will be daunting for many teams in La Liga, but Osasuna will back themselves to take something from the fixture.

In the last ten La Liga matches, Atletico Madrid have tasted victory in four matches, shared the points five matches, and had a single defeat. Los Rojiblancos have collected 17 points out of a possible 30.

Diego Simeone’s men have won two and drawn three matches in their last five outings in the league, collecting 9 points out of a possible 15.

Osasuna have won four, lost four, and drawn two fixtures in their last 10 outings in La Liga. In this run, Arrasate’s men have collected 14 points out of a possible 30.

In their last 5 La Liga outings, Osasuna have won one, drawn two, and lost two. The last two matches have ended in identical 2-0 defeats to Real Sociedad and Sevilla.

Diego Simeone will be without central midfielder Marcos Llorente. The Spaniard is out with a muscle injury since October 22nd and has missed five outings for Los Rojiblancos.

Also out from selection is Thomas Lemar. The Frenchman is out with a muscle injury since October 25th and has missed four matches.

Kieran Trippier is also a doubt for the visit of Osasuna after landing awkwardly in the 3-3 draw at Valencia.

Jagoba Arrasate will be without defender Aridane Hernández with a muscle injury. The rest of the squad is fit an available for selection for the visit to the Wanda Metropolitano to face Los Rojiblancos.

With the likely absence of Kieran Trippier, Šime Vrsaljko will be tasked with filling the shoes of the Englishman at wingback.

Trippier is a crucial cog for the way that Simeone wants his team to play. He provides width going forward, the threat of crosses, and works hard in defending when Atletico not have the ball.

Šime Vrsaljko will play a crucial role in in retaining this balance for Los Rojiblancos.

Lucas Torró has been the lynchpin of the Osasuna midfield. Playing as the defensive midfielder in the 4-2-3-1 or 3-5-2 formations that Arrasate mostly uses, Torró plays an important role in the defensive and attacking phases for Osasuna. He will be crucial once again if Osasuna are to take anything from their visit to the champions’ home.

Expect Atletico to seek to take control of the match, take the initiative to attack through Griezman, Suarez, Correa, and the two wingbacks.

Expect Osasuna to seek to frustrate Atletico with a back five approach and two low blocks designed to deny the talented Atletico forwards any space.

But reigning champions will have too much for Osasuna; Diego Simeone’s men will take all three points.

Make sure to bet on Atletico vs Osasuna with 22Bet!