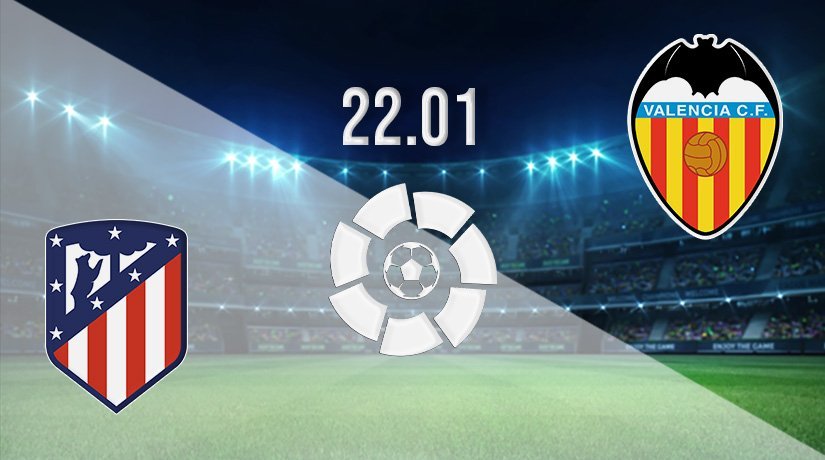 Saturday brings a hectic day of club football from across Europe with each of the continent’s most famous teams in action. La Liga provides supporters with an intriguing four-match programme that gets underway at 13:00 with the games shown live on television or reputable live streaming apps. Top of the bill comes from the famous footballing city of Madrid where current La Liga champions Atletico Madrid take on Valencia from 20:00. The locals haven’t been anywhere near as convincing this season as they were in the previous campaign but they are a force to be reckoned with, especially at home and hold ambitions of making it into the top-four and next season’s UEFA Champions League.

Atletico Madrid may hold the home advantage for Saturday’s match but the locals can’t afford to take opponents Valencia lightly or they could be made to pay a hefty price. The visitors have been performing well below the levels expected of them by supporters in recent weeks and have dropped out of the European places as a result. The pressure is on the visitors to make a timely return to winning ways and everyone camped in the away dressing room will feel that. They know they must improve and take something from this match.

Saturday evening’s game will be the second involving these teams this season and neutrals planning to watch the match live on television will be hoping for a repeat performance. The sides served up a six-goal draw back in November after Hugo Duro scored two goals in stoppage time to rescue a share of the spoils.

Atletico Madrid have looked a shadow of the swashbuckling, all-action team that upset the odds to win the La Liga title last season. They gained an early advantage in the table and were good enough to hold on to it, seeing off a late surge from derby rivals Real Madrid and Barcelona. Atletico conquering La Liga wasn’t on par with the likes of Leicester City winning the Premier League in England, but it wasn’t a million miles away from the Foxes outstanding achievement in terms of impressive results. Fans hoped that title win would kickstart a new era for Atletico but the team lost some of their better players in summer and those left behind haven’t kept up the pace.

Heading into game week we find Atletico Madrid down in fourth place in La Liga, clinging onto a Champions League slot for next season. The locals have won nine, drawn six and lost five of their opening 20 starts, scoring 33 goals and conceding 24. When we analyse those numbers we see Atletico have scored more goals than Sevilla who are currently in second place and rate as the main danger to leaders Real Madrid. They have lost the same number of matches as Athletic Bilbao who are down in ninth and their defensive record is poor. The 24 goals leaked is Getafe who are in 17th and fighting to keep their head above water and avoid the relegation fight going on below.

We saw Atletico Madrid in action last Sunday when they stumbled to a draw away to Villarreal. That was another entertaining match where Madrid created plenty of chances and scored two goals but they also conceded a couple as their fragility of their defence remained a problem. Fans will want to see the team be stronger at the back this time, more like the performance that led to a convincing 2-0 home win over Rayo Vallecano in their opening game of 2022.

A disappointing start to the season continues to haunt this Valencia team as they continue to play catch-up on the main players in the division. The team got off to a poor start and even an upturn in fortunes during winter wasn’t enough to move them into the top half of the division. With six defeats in their opening 20 games, the visitors are on fragile ground and their lack of consistency certainly isn’t helping them any. They started the week 10th in the table and stand and a crossroads. The results of their next four or five games could decide on whether they are pushing for Europe or battling to stay in the division.

Their form after last week’s defeat had Valencia on seven wins and seven draws against six defeats. On closer inspection, those numbers show Valencia have lost as many games as Granada who are way below them in the pecking order. The away team started the week having scored 32 goals, which is a decent return for a mid table team but they have also leaked 32 goals and that is just two more than Alaves who are stuck down in the relegation zone, scrapping for their survival.

Valencia entered game week on the back of two defeats on the bounce, rocking the team’s confidence to its foundations and undoing the great work done when taking nine points in their previous three games. The 28 points collected has Valencia in 10th but all is not lost as the team remains within touching distance of the top seven. They remain in with a shout of making it into the Europa League places but there is plenty of football still to be played and hard work to be done if they are to achieve that goal.

Atletico Madrid are ranked higher in the division and enjoy the home advantage over their opponents which could be enough to see them edge the win and earn a welcome three points. They look to be out of the title race at this stage but there’s no reason why they can’t apply pressure to the teams above and see how they react.

Valencia are better than their league position suggests and they have the talent to get something out of this game. With both teams heading in with a fragile defence but the ability to score goals we could see the kind of entertaining match these sides served up last time.

The pre-match betting odds available at 22bet has Atletico Madrid priced at 1.45 for a win while Valencia can be backed at 8.3. The draw trades at 4.08.

Make sure to bet on Atletico Madrid v Valencia with 22Bet!