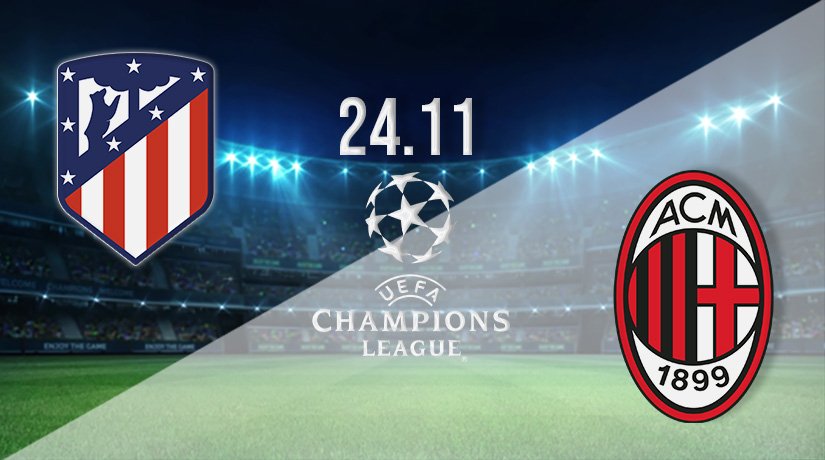 Atletico Madrid, The current champions of Spanish football, enjoy home advantage when welcoming Italians AC Milan to Madrid for a Champions League Group B match on Wednesday from 20:00 GMT. This game will attract a huge audience from across Europe with the play shown live on television.

Followers of English Premier League side Liverpool will keep a close eye on the play while watching their team entertain FC Porto at Anfield. The group is all set for a thrilling climax, with both Atletico Madrid and AC Milan hoping to land the three points on offer here to boost their chances of going through.

The teams involved in this math are third and fourth in Group B and know time is running out. They require all three points here while hoping Liverpool deal with Porto to secure the top spot in the table while blowing the race for the runner up position wide open. That will make for a grandstand finish to the pool.

Needing favours isn’t ideal, but both Madrid and Milan must focus on the only thing they can control, which is winning this match.

These sides have met only three times in the past, with the Spaniards dominating the fixture, boasting a maximum of three wins. They collected the points in the reverse in Italy earlier in the campaign, leaving with a vital group win thanks to an eye-catching 2-1 scoreline.

Milan opened the scoring in that match, but Madrid hit a late double to stage a smash and grab on the points, with Suarez netting on 90 minutes. Will we be treated to another thriller here?

Madrid have lost their last two

Atletico Madrid shocked European football last season by winning the La Liga title, hitting the front early and seeing off late challenges from Real Madrid and Barcelona. It was expected they would build on that success to then challenge for the Champions League.

Still, the title-winning team of last season was severely weakened during the summer transfer window, with several big-name players sold. That has had an impact on the quality of the team and results on the park. They are now second from the bottom of their Champions League group and off the pace domestically.

Atletico enter this match in third place in Group B with just four points claimed from the first dozen that have been available to them. They have won one, drawn one and lost the other two, scoring four goals but conceding two. The only side currently worse off than themselves is opponents AC Milan.

Madrid may have lost their last two outings against table-toppers Liverpool, but they remain just a point behind FC Porto in second, who now take on the Reds. A win here could lift them into second and the driving seat for a place in the knockout stages of the tournament heading into the final match.

The home team were last seen in this competition earlier in November, losing 2-0 at Anfield with the goals that day scored by Jota and Mane with the beaten side losing Felipe to a red card after just 36 minutes.

Since suffering that defeat in England, Atletico Madrid has drawn 3-3 away to Valencia in La Liga and then ground out an uninspiring 1-0 win at this venue against Osasuna at the weekend. They left it late in that match, Felipe scoring what proved to be the winning goal on 87 minutes.

AC Milan have a mountain to climb

AC Milan would have entered this group hoping to challenge Liverpool for the top spot but, instead, they are stuck on the bottom rung and look like they could exit all European competition in the coming weeks. Failure to climb at least one position in the group would see them miss out on a place in the next round of the Champions League or the consolation of dropping down into the Europa League.

It is a mess all of their own doing, but AC Milan still has a chance to fight back, starting with leaving Spain with all three points.

Liverpool has taken complete control of this group and hold a 100% record. That leaves the other three teams to battle it out to be the best of the rest and heading into this match in round five. Four points is the difference between Porto in second and AC Milan in fourth.

Nothing short of back to back wins is required if AC Milan are to stand any chance of going through to the next round, and even then, they’ll need a few favours. How likely are they to claim their first two wins in the last two games? It’s a big ask, but we’ll have a better idea of what to expect from them after their trip to Spain.

AC Milan are without a win so far, drawing one and losing the other three. They lost each of their first three games but stopped the rot with a point last time, achieved thanks to a 1-1 at home to Porto, a match fans expected them to win.

Diaz gave Porto an early lead, and a sorry Milan who, at times, look to have already thrown the towel in when playing Champions League football, needed an own goal to get level. Much better is required if they are to stand any chance of getting a win in Spain, and AC Milan must start taking their chances.

This is a match both teams know they simply must win if they are to remain in the hunt for second place. Even a draw would be viewed as a poor result by both. The desperation for three points means both Atletico Madrid and AC Milan must go on the attack early and get the goals needed to settle any nerves and secure a crucial win, one that could define their plans and budget in the winter transfer window.

Atletico have been slightly better than AC Milan so far and now have the all-important home advantage. They haven’t done much to inspire confidence during this group campaign, but if they could raise their game to get the win here, it would breathe life back into their season. The locals are certainly good enough to do that when at their best.

Make sure to bet on Atletico Madrid v AC Milan with 22Bet!