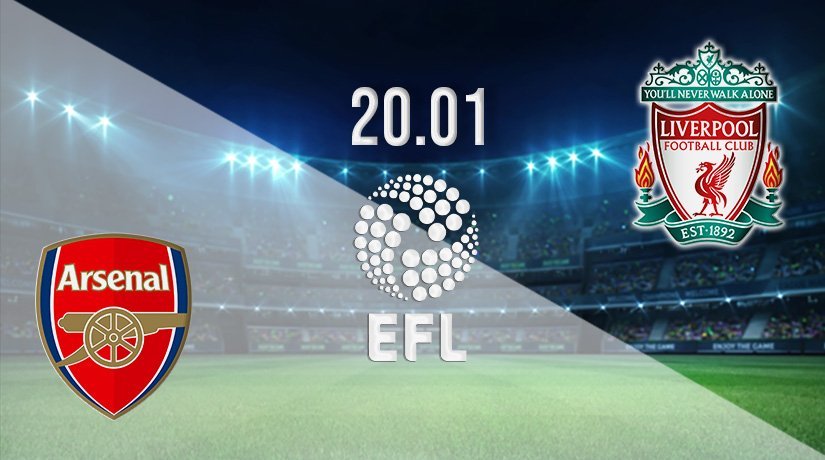 Football fans have an all-Premier League match to enjoy when big guns Arsenal and Liverpool meet in the EFL Cup semi-final. This is the second leg and the tie is hanging in the balance after the pair played out a tense goalless draw at Anfield in the first leg. That was seen as a great result for the Gunners as they were able to hold the Reds to a draw on their patch and in front of their fans. The advantage now moves to Arsenal for this decider in London but Mikel Arteta’s side must ensure they make full use of playing at the Emirates. Liverpool hoped to finally get the win needed to progress to the final.

The draw last time was viewed as a better result for Arsenal than it was Liverpool but the fact remains that this game remains in the balance. The winner will progress and the loser will be knocked out. There is no aggregate score or away goals to consider. Both sides know what is expected of them and what they must do to make it through. That will allow them to get down to business early, making it a great spectacle for the thousands in attendance at the Emirates Stadium and the millions worldwide watching the action live on TV.

Arsenal and Liverpool have met 17 times previously in this competition with the head to head stats favouring a draw. Both teams have won five games each with the other seven meetings ending all square. That was the outcome of the first leg, of course, but a winner must be found in this match. Extra time and penalties are available is required but in the thick of a hectic campaign the managers will want to finish things in regulation time.

Arsenal always knew they were up against it when travelling to Anfield for the first leg with many pundits and even some supporters writing them off before a ball had been kicked. Not many teams in Europe welcome a visit to Merseyside and with the Reds pushing hard for a place in the final and shot at winning the season’s first piece of silverware, it looked like a doomed trip. The match didn’t start well for the Gunners who were reduced to 10 men after just 24 minutes when Xhaka was sent off, shown a straight red card. That made an already uphill challenge near impossible, but the Arsenal players showed their class and proved their character to manager Mikel Arteta.

The stats of that match showed the level of Liverpool’s dominance with Arsenal ending with just 22% of the ball possession and a single shot on target. They may not have seen much of the football that night but the players kept their shape, rolled up their sleeves and defended well. An interesting feature of that match was Arsenal and Liverpool both finished with a single shot on target each, showing just how resolute and dogged the Londoners were when reduced to 10 men. Fans will want to see more of that fighting spirit here.

Speaking to the press at full-time, Arteta chose to concentrate on his team’s stubbornness, crediting them on never giving up, even when Liverpool began to heap on the pressure, forcing Arsenal’s backs against the wall. Mikel added that his players played the game they had to play and attention now turn to finishing the job at home and booking their place in the final at Wembley Stadium this winter. The boss finished by calling on the club’s fans to create a special atmosphere.

Everyone connected to Liverpool Football Club would have been disappointed by the result of the first leg. They appreciated having the home advantage in the first leg and knew they wanted to avoid having to go to London and win. Ideally, the Reds would have taken at least a one-goal cushion with them when heading south but that isn’t the case and the players must adapt to that. If they want to go through to the final they must win at the Emirates Stadium. It doesn’t matter how they do it, the victory is more important than the performance.

Liverpool dominated the first leg as the match stats and ball possession prove but they failed to fashion any clear cut chances at goal. The Reds had 17 attempts at goal but put only one of them on target and that’s the kind of stat that will keep Jurgen Klopp up at night. He will demand his attacking players are far more ruthless in the second leg.

Since that disappointing draw at home against the 10 men of Arsenal in the EFL Cup, Liverpool have appeared once, beating Brentford 3-0 at Anfield in the Premier League on Sunday. The final scoreline flattered the victors a little as they took a 1-0 lead into the break thanks to a goal from Fabinho before second half strikes from Oxlade-Chamberlain and Minamino helped wrap up a crucial three points that moved Liverpool into second place behind Man City and ahead of Chelsea.

This game is finely balanced and that will ensure it provides followers with an entertaining spectacle. Following the stalemate of the first leg it’s anyone’s guess which team will grab the opportunity and progress to the next round. Arsenal have the home advantage and will be better than they were last time with 11 men on the field of play. They will also be more adventurous with the tie poised at 0-0.

Liverpool created enough chances to win two or three games in the first leg but their weary attack let them down. The defence will face more in the way of danger this time while the Gunners have a full complement and the attack must work harder to create space and chances. The forwards know much better is expected of them but if Liverpool are at their best they should squeeze through.

The pre-match betting odds available at 22bet has Arsenal priced at 3.4 with Liverpool 2.105 and the draw 3.5.