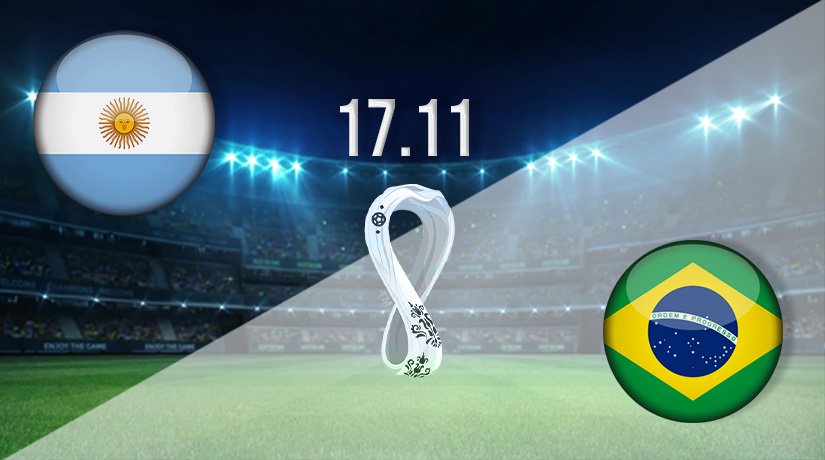 Football fans have the return of league action to look forward to this season, but before that, there’s a fascinating international match that will remind us just why we call it the beautiful game.

Argentina and Brazil clash in a mouth-watering World Cup qualifier on Tuesday with a 23:30 GMT start time. Armchair fans around the world will be tuning into the action live on television in the hope this game lives up to the pre-match hype.

These are the two best teams in the South American qualifying league and two nations that are sure to play a big part at Qatar 2022, which gets underway next November. Which side will progress as winners of the group and secure themselves an easier draw for the groups and a clearer route to the final while taking the early bragging rights?

We’ll have a clearer answer to that question at the end of this match as the two league leaders clash.

Argentina and Brazil last met in competitive action back in the summer in the Copa America. That was a competitive contest that was eventually won by Argentina thanks to a 1-0 result. Angel Di Maria scored the only goal of the game to secure a famous win for his country.

Interestingly, Argentina has won their last two matches against Brazil by a 1-0 score and stats lovers will be intrigued to learn one team has failed to find the net in each of the last six fixtures. Will this renewal fall into line, or are we set for a goal-fest?

Argentina start as best of the rest

Argentina enter game 13 of the campaign in second place behind Brazil. They can begin to plan for next year’s World Cup challenge in Qatar where they will rank as one of the early favourites with pundits to win the trophy.

They could finish second in the qualifying group and go on to win the World Cup but the home team will want to challenge for pole position. Winning this match would give them a chance of achieving that. Finishing on top of a group including Brazil would send a message of intent to their rivals ahead of the competition proper and there’s no doubt this team is talented enough to achieve that.

They enter with stats of eight wins and four draws with 20 goals scored and only six conceded. Like Brazil, they are unbeaten to date but have suffered from a lack of killer instinct, failing to finish teams off and turn one point into three. The four draws against their name is three more than the Samba Boys and that has been the difference so far.

Argentina have scored seven fewer goals than Brazil while conceding two more. Fans will be proud of that unbeaten record but know another share of the spoils wouldn’t be good enough. A win is needed if they are to pile pressure on their opponents.

The hosts do boast the better recent form of these two teams with three wins in their last three, claiming a maximum of nine points. Brazil have taken seven in the same period and that will encourage supporters of Argentina ahead of this mammoth clash.

They were last seen in action beating Uruguay 1-0 on Friday night. A greater margin of victory was expected by many but Argentina got the job done and won the match.

Brazil out to hold their ground

Brazil enter game 13 on top of the group and already through to next year’s competition. They will travel to Qatar 2022, which kicks off in November, and will be viewed as a team with a big chance of winning the title. Brazil is often near the head of the list when pundits and other football experts are making their World Cup predictions and this tournament will be no different.

The famous footballing nation hasn’t lived up to expectations or their own high standards in recent years, including the World Cup in Brazil, but they are always a threat and are capable of beating any nation when at their best.

Brazil have won all but one of their previous dozen matches with their form so far showing 11 wins and one draw. To make things more interesting, the spare result came against Argentina, allowing both teams to keep their unbeaten records intact.

The leaders have scored 27 goals and conceded four and those stats explain why they sit in the pole position. To date, this Brazilian team has been as good as any that’s gone before it during qualifying and they have already proven themselves, beyond all doubt, to be the best team in the pool.

The visitors have won four and drawn one of their last five but do make this trip on the back of a pair of wins. They were last in action on Friday when beating Colombia 1-0 and that result secured their place at Qatar, not that it was ever in any doubt.

It was a match they were expected to win and despite facing a hard-working opponent who refused to give up, Brazil were good enough to grind out the victory and bag all three points.

Two of the biggest names in world football and it wouldn’t come as a huge shock to see either of these nations become champions of Qatar 2022. They could even meet in the final match without it rating as an upset.

There’s plenty of football to be played before a champion is crowned but both sides will be eager to continue their winning ways with three points in that match. A draw wouldn’t be the worst result for Brazil but the locals will want more.

Both teams were last in action on Friday and both secured narrow wins which suggests another low-scoring match is possible.

Brazil do have the better defence and have scored more goals which will ensure their fans head into this blockbuster expecting another three points on the tally. The players are certainly good enough to achieve that.

Make sure to bet on Argentina v Brazil with 22Bet!