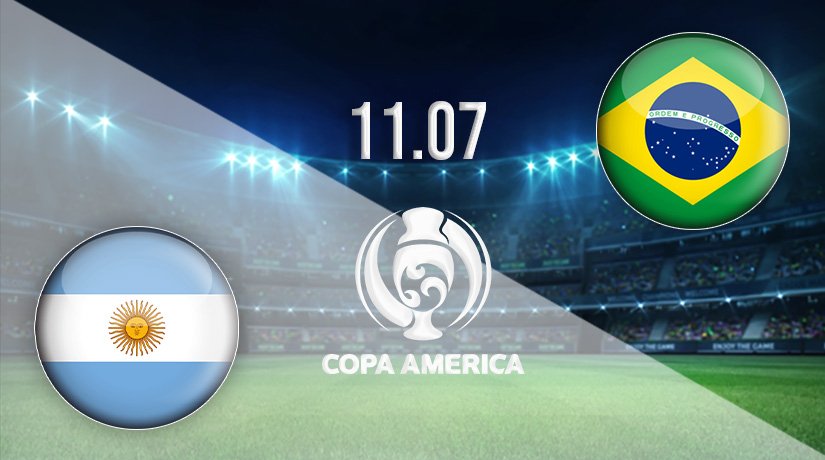 The final of this summer’s Copa America kicks off what will be a thrilling Sunday of football for followers of the beautiful game. The deciding match between two powerhouses of the sport in Argentina and Brazil kicks off at 01:00 GMT, a full 19 hours before England take on Italy at Wembley in the Euro 2020 final. Fans will be in attendance, but there will be millions more watching around the world with armchair supporters fully expecting an entertaining match from these old rivals.

Argentina and Brazil were two of the favourites with most expert pundits to meet in the final, and the pair had no issues living up to expectations, both blazing a trail of glory to the final. They are here on merit and will be proud to have served their fans well this summer, but both camps will also be determined to pull out one last big performance and cross the line as Copa America champions. Which team will that be?

These teams have met a total of 53 times in the past, with Brazil dominating the fixture over the years. The head-to-head stats currently stand at 25 wins for the Samba Boys against the 13 victories of Argentina and 15 draws. The most recent clash ended in a 1-0 win for Argentina in a 2019 friendly match, their first victory over Brazil since 2017. Will they do it again when it matters, or will we see the return to winning ways of Brazil in this fixture?

Argentina was impressive during the group stages of Copa America and progressed to the knockout rounds after topping Group A. They did so with 10 points on the board following a draw then three victories in their four matches at that level. It may have been an unconvincing start from one of the pre-tournament favourites, ending level with Chile, but it didn’t take them long to hit their stride. Argentina took nine points from their following three games to sail through.

They scored seven goals and conceded just two; their 10 points tally placing them three ahead of runners up Uruguay and four points clear of third-placed Paraguay. They signed off with a stunning 4-1 win over Bolivia that served as a warning shot to their rivals. It was a show of strength from Argentina, but fans knew there was plenty more to come from their team, and they saw them reach their potential during the knockout stages. The quarter-final draw handed Argentina a match against Ecuador. It was one they were expected to win and one they did at a canter.

Having hammered Ecuador 3-0 in the quarter-final, a daunting semi-final match against Colombia awaited, and that was to prove the team’s toughest outing of the competition so far. That match ended 1-1 at full-time, with the game entering extra time and eventually penalties. Martinez fired Argentina ahead inside the first seven minutes, but Diaz hit back for Columbia on the hour. Spot kicks were needed, and it was Argentina that held their nerve, progressing to the final with a 3-2 victory.

They don’t come much bigger in international football than Brazil. The Samba Boys may not have been at their best in the World Cup for a few years now, but they are a nation that continues to churn out quality players. The current crop of Brazilians are no different; the squad littered with some of the biggest names from European football.

In Lionel Messi, their opponents have the singles best player on the field, but, pound-for-pound, Brazil are the better team. That is certainly true on paper, but football matches aren’t won on the stats sheet, and the Samba Boys know this. They understand the dangers of taking Argentina lightly. They must be at their best to have any chance of adding this summer’s Copa America to their already impressive haul of titles.

Brazil finished as winners of Group B after four games played, and they did so with the same number of points as their opponents, collecting ten from a possible dozen. Their route to the 10 points was slightly different as Brazil raced into the lead, winning each of their first three games to take control of the pool.

When the group winner spot was nailed down, only then did the team take their foot off the gas, signing off with a draw against second-bottom Ecuador. That may not look too impressive, but the race had been run, changes were made to the team, and Ecuador drew three on the bounce, so it was no great surprise.

Having eased through to the next stage, Brazil drew Chile in the quarter-final and edged that match by a 1-0 score. The match-winner in that game was Tolentino Coelho de Lima, who found the next on 46 minutes before teammate Gabriel Jesus was sent off. In the semi-final, Brazil defeated Peru by the same scoreline thanks to the same scorer. Neymar beat three defenders to set up the scorer in what was a must-see goal for football fans.

These teams are no strangers to meeting in big matches, and although Brazil has dominated over the years, the games have been more competitive in recent years. Each nation has two wins each from their last four meetings, which set us up nicely for this final. Another competitive contest is expected, with armchair fans hoping this renewal lives up to expectations and gifts us another thriller.

Regardless of the match-winner, there has been no more than two goals between the pair. The trends show 1-0 was the final score in three of the last four. Both nations are here on merit and will believe they have what it takes to win the match. They have shown flashes of brilliance at Copa America this summer but have also demonstrated the fighting quality to grind out important wins.

The pre-match betting available at 22bet has Argentina priced at odds of 3.8 to win this match with Brazil 2.11 and the draw 3.168.

Make sure to bet on Argentina v Brazil with 22Bet!