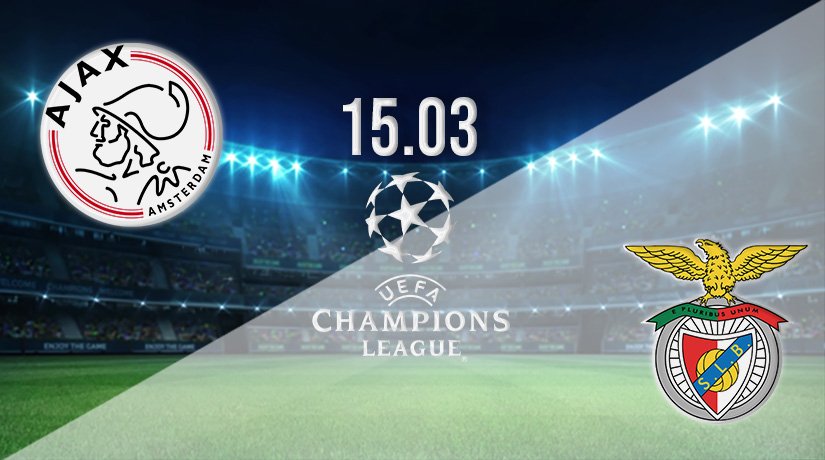 After an enthralling first leg, which ended in a 2-2 scoreline, Ajax and Benfica will take to the Johan Cruyff arena for the second leg of this round-of-16 tie on Tuesday at 21:00 GMT, as both teams seek to qualify for the quarter-finals of Europe’s premier club competition.

Ajax are currently top of the Eredivisie with 63 points, two points ahead of second-placed PSV, with eight matches remaining in the season. This home form has been replicated in Europe with the run to the round-of-16.

Ajax have won the last two matches in Eredivisie on the bounce; they will be looking to extend this run to three when they host Benfica for the second leg of this finely poised tie at 2-2.

Erik Ten Hag will look to address the solidity of his team ahead of the clash with Benfica to enhance their chances of qualifying for the quarter-finals.

Can Benfica Cause an Upset Away from Home?

Benfica lie third on the Primeira Liga table with 58 points and 12 points behind league leaders Porto. Nélson Veríssimo’s side are in the middle of a five-match unbeaten run in the league.

In the first leg of their round-of-16 tie with Ajax, Benfica were impressive in the 2-2 draw. They will be backing themselves to get the job done when they visit Ajax on Tuesday.

In the Eredivisie, Ajax have won five and lost one in their last five rounds of fixtures in the league. They have collected 15 points and dropped only three in this run of form.

Ajax have also won the last two matches in Eredivisie following their 2-1 reverse against Go Ahead Eagles.

In this season’s Champions League, Ajax have played seven matches during which they have won six and drawn one. In this run, Erik ten Haag’s side have plundered 22 goals while conceding 7.

Nélson Veríssimo’s side have been third-best in the Primeira Liga this season behind league leaders Porto and defending champions Sporting CP.

Benfica’s form in the Primeira Liga shows that they are unbeaten in the last six rounds of fixtures. In this run, Nélson Veríssimo’s men have won four times and drawn twice.

Benfica have hauled 14 points in this run while dropping only four.

In their Champions League campaign, Benfica have played seven matches in which they have had two victories, three draws, and two losses. In this run, Nélson Veríssimo’s men have scored 9 goals while conceding 11.

Erik Ten Haag will be without the services of long-term absentees Sean Klaiber and Maarten Stekelenburg. Right-back Klaiber is nursing a ruptured cruciate ligament, whereas goalkeeper Stekelenburg is recovering from groin surgery.

Goalkeeper Remko Pasveer is also out with a fractured finger, whereas attacking midfielder Mohamed Ihattaren is a doubt due to fitness issues.

The experienced center-forward Rodrigo Pinho is a doubt for the clash with Ajax; the 30-year-old is nursing a ruptured cruciate ligament.

Centre-back Lucas Verissimo is missing with a ruptured cruciate ligament, whereas center-forward Haris Seferovic has a leg injury, which makes him a massive doubt for Tuesday’s tie.

The striker provides a physical presence for Ajax upfront; he is the reference point that shapes their attacks while providing a goal threat. He will be crucial for the match against Benfica.

The midfielder is crucial in the defensive and attacking phases on Benfica’s play. He will be crucial in this important match against Ajax.

Expect Ajax to dominate possession and key areas of the pitch, such as midfield and the wide areas.

Benfica will seek to be solid, but they will build from the back and retain decent amounts of possession.

Ajax are highly favored to win the match and progress to the quarter-finals.

Make sure to bet on Ajax vs Benfica with 22Bet!