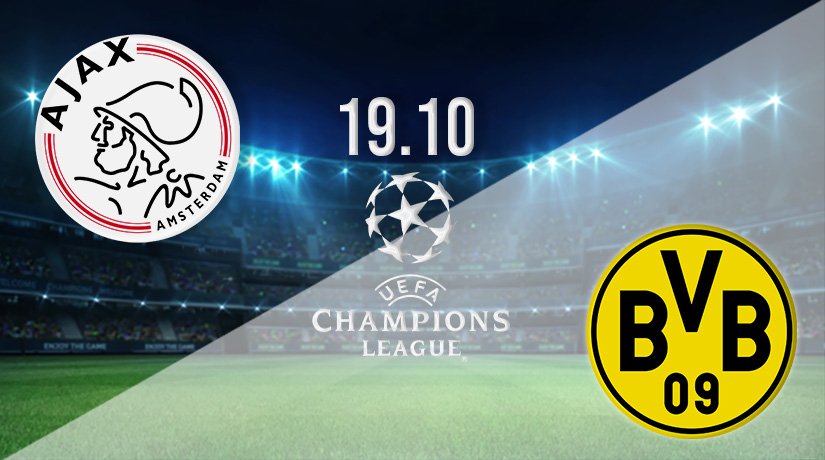 Champions League football follows an exciting weekend of club league action from across the continent with each of the biggest and best-loved competitions back. The play resumes on Tuesday as UEFA’s premier competition moves onto matchday three. There are some exciting fixtures to look forward to, with every game scheduled to be covered live on television. In this preview, our team of football content writers focus on the match from the Netherlands where Ajax host German club Borussia Dortmund from 20:00 in Group C.

Both Ajax and Borussia Dortmund were the pundits’ picks to progress from this set, with the only uncertainty being over the order in which they finished. Will Ajax move to the next round as winners of pool C, or will Borussia Dortmund show they are serious contenders for the crown by finishing in pole position? A strong argument could be made for either team winning the group, but we will have a much clearer picture of how things should go at the end of this hotly anticipated contest.

These teams have met four times previously, and an interesting stat is they have never produced a draw. Ajax enters the game holding two wins, with Borussia Dortmund also carrying a pair of victories. The most recent game finished up 4-1 to the Germans in Holland, but that was almost a decade ago, and much has changed at both clubs and in football since. Which side will rise to the occasion and secure an important three points? Let’s investigate the stats in the hope of unearthing some clues.

Ajax hold the home advantage on matchday three and enter this game in pole position of Group C with a maximum of six points against their name from two games. They lead the way on goal difference ahead of Borussia Dortmund in second place. The locals have played two and won two, scoring seven goals and conceding only one. That is one of the competition’s best records at this early stage. It’ll fill followers of the locals with confidence. Fans in attendance and watching around the world will hope to see Ajax continue their winning ways and move on to nine points while hurting their main rivals for the top spot.

The locals got off to the strongest possible start when recording one of the biggest and most emphatic wins of matchday one when hammering Sporting Lisbon 5-1 away from home. That result laid down a marker for the group stage, showing Ajax were here to win the pool and were capable of scoring goals on the big stage. The Dutch giants haven’t been themselves for a while now but look to be finally back firing on all cylinders. They showed the watching world just how good they are when in the mood, creating chances, scoring goals and keeping things tight in defence.

The Dutch side continued their perfect start, winning 2-0 at this venue when Besiktas came calling. The winning side had the points wrapped up inside halftime on that occasion, with Berghuis breaking the deadlock on 17 minutes before Haller made it two just before the interval. They had chances to extend their lead during the second 45 but claimed the win without fuss. A perfect start and a solid foundation on which to build.

Borussia Dortmund may enter this match sitting second in the group behind their opponents, but they too boast a 100% record and will believe they are good enough to win the match. Borussia Dortmund started their Champions League campaign knowing the draw had been kind to them, and they had been added to a section that looks winnable, certainly on paper. They have started in the right frame of mind, winning two games and putting six points on the board while scoring three goals and conceding one. Victory here would see them leapfrog their hosts, moving into the box seat.

Dortmund began their adventure with a hard-fought 2-1 win over Besiktas on the road on matchday one. That game was closer than many pundits expected it to be, but the final score flattered the losing side as they hit back with a consolation goal deep into stoppage time at the end of the play with 94 minutes on the clock. The winning team that day earned the points thanks to first-half strikes from Bellingham and Haaland. It was a simple but impressive three points and showed Dortmund possess fight as well as flair.

The Germans built on that win with a 1-0 at home over Sporting Lisbon on matchday two. That was another game with a scoreline much closer than most had predicted, but another game where Dortmund got the job done and claimed the three points. Malen scored the goal that mattered that evening when turning in an assist from the impressive Bellingham, and the latter will be eager to enhance his already strong stats in this game. Victory on the road over their nearest rivals would make Borussia Dortmund convincing favourites for the gold medal finish in Group C.

Two teams that have impressed so far and two that enter this match believing they are good enough to claim all three points. Ajax hold the home advantage and are top of the pool on goal difference. If they can get the win fans expect of them, then the Dutch side would move into a commanding position and a step closer to playing Champions League knockout football. They certainly have the ability and class to achieve that.

Borussia Dortmund haven’t been nearly as impressive as their opponents so far, but they do have the same number of points, and there’s more to come from the Germans. It’s obvious they haven’t hit top gear yet, which is normal for any side serious about challenging for the Champions League trophy. The coaching staff will let their men off the leash for this one.

Make sure to bet on Ajax v Borussia Dortmund with 22Bet!