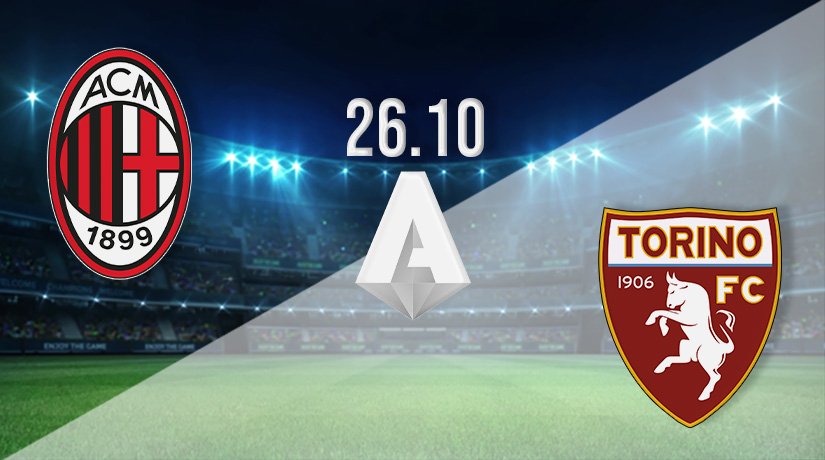 There’s a busy midweek of football fixtures from across Europe with games taking place in the major leagues. The Italian Serie A is represented with three matches on Tuesday including a top of the bill tussle involving AC Milan and Torino.

This one is scheduled for a 19:45 GMT kickoff and will be shown to a bumper audience live on television. A competitive 90 minutes is expected but most respected pundits have AC Milan picked as the favourites to collect all three points.

That prediction will come as little surprise to followers of the top tier of Italian football as Milan have enjoyed a strong start to the campaign.

They have set themselves apart as genuine contenders to win the league trophy this season while Torino have lacked consistency so far and are stuck in the bottom half of the division as a result.

AC Milan and Torino last met on Serie A duty back in May of this year when Milan ran out resounding winners, hammering their opponents 7-0.

The bulk of supporters who pack the stadium on Tuesday will want to see something near a repeat performance but the coaching staff will be happy with a win and three points. Will they get their wish?

AC Milan are one of only two unbeaten teams in Serie A with the other being leaders Napoli. The locals have won eight and drawn one of their nine starts, scoring 22 goals and conceding nine.

That leaves AC Milan on 25 points, level with current leaders Napoli who slipped to their first first at the weekend, losing their 100% record and allowing Milan and their winning run to draw level. The only difference between the two at present is Napoli are three goals better off, giving them a slender advantage but that won’t put anyone at Milan off their stride.

The home team enter on the back of an incredible winning run of form and their stats are one of the most impressive in European football. The 25 points gained means they are already seven clean of Inter Milan in third place and 10 points inside the top four Champions League places.

There is plenty of football still to be played this season but the Serie A campaign is fast becoming a two-horse race between Napoli and Milan with neither side showing any signs of taking their foot off the gas.

We last saw AC Milan at the weekend when they beat Bologna 4-2 away from home in what was a real show of strength by the title challengers.

The beaten team finished that match with nine men after having Soumaoro and Soriano sent off but did score two goals, including a surprise OG from Ibrahimovic. The attacker made up for it by netting at the right end with 90 minutes on the clock to cap an impressive performance from his team.

Torino make this trip to the home of an opponent pushing for the league title and pole position in Serie A on the back of a poor run of form. The visiting side can be found down in 12th place in the division with their stats stuck on three wins and two draws against four defeats with 12 goals scored and 10 conceded.

The 11 points gained means Torino are already four off the European places and showing fans nothing that would suggest they are capable of pushing for the prizes in this campaign.

Torino’s last five league matches consist of two draws, a pair of defeats and then a win.

They are only five points better than the relegation zone, and that’s despite bagging an important victory at the weekend to climb the ladder and put some breathing space between themselves and Genoa who can be found down in 18th place, wrapped up in what is already looking to be a fierce battle to avoid the bottom three places.

Another win on the board would help push Torino further clear of the danger zone, but that won’t come easy.

We last saw Torino in action at the weekend when bagging what was only their third win of the season from nine attempts. They played on Friday night and claimed a stunning 3-2 win over Genoa at home.

The scoreboard at the end of play flattered the beaten team and made the game look closer than it was. Torino were deserved winners of the points and had a 3-1 advantage until the 80th minute when Genoa fought back to set up a tense finish.

This is a meeting of two teams heading in different directions as AC Milan race towards pole position in Serie A while Torino stutter through their opening fixtures, struggling to nail down any kind of consistency.

The visitors did gain a huge win over a relegation rival at the weekend and were good value for the three points, but even then, they conceded two goals against a team that could drop down a division in spring. A huge effort is required from Torino here if they are to take anything from Milan here, especially from the defence that have looked fragile at times this season.

AC Milan haven’t put a foot wrong so far, and although they benefited from playing against nine men at the weekend, they got the job done in style and used the match to give a few of their fringe players some game time.

Confidence is sky-high in the home dressing room, and it would be no surprise to see them pick up another three points and keep the pressure on Napoli for the top spot. If they play to the best of their abilities, they are good enough to win the match and score a few goals in the process.

Make sure to bet on AC Milan v Torino with 22Bet!