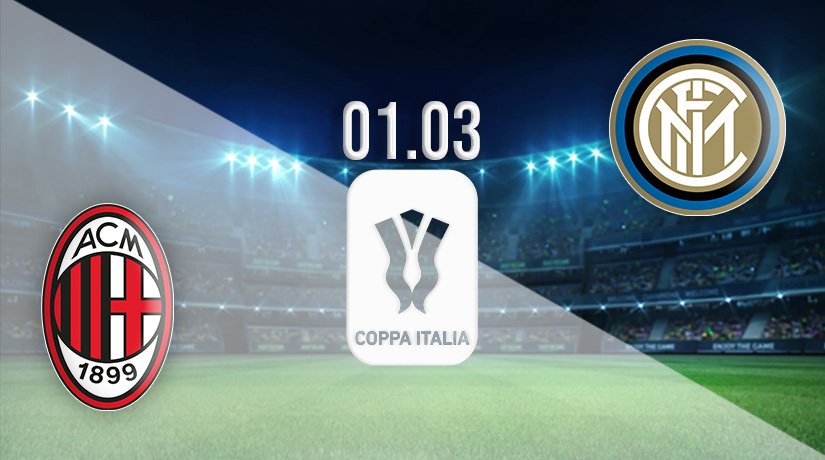 There are no UEFA Champions League or Europa League matches on the midweek schedule but football fans do have plenty to keep them entertained. Tuesday brings us the opening day of March and we get going with a fascinating Milan Derby as AC Milan and Inter Milan clash in the semi-final first leg of the Coppa Italia. These ancient rivals have faced off in important matches many times in the past, meaning they’ll get right down to business here.

With this being the first leg, nothing will be decided on Tuesday in terms of which team progresses to the final and challenges for this famous trophy but both AC Milan and Inter Milan know what’s at stake here. A first-leg lead would put them in the driving seat for a place in the final. The aim of both teams is to nick the first-leg lead with the view of protecting that advantage in the second match but that’s easier said than done, especially in one of the world’s most famous derby matches.

This game will be played out in front of thousands of Milan supporters with millions of football fans watching around the world and you can follow the match live on television from 20:00 GMT on Tuesday. This will be the third time these teams have met this season following a 1-1 draw back in November then a 2-1 win for AC Milan last month. Followers of the stats may be interested to learn that three of the last five Milan derbies have produced a 2-1 result with both teams on the scoresheet in four of the last five.

AC Milan was the most impressed team in the competition during the quarter-finals stage when blasting Lazio out of the running. It had been billed as a potential banana skin for AC Milan with Lazio looking determined to cause an upset and progress to the semis but it was AC Milan who was found in a dogged mood. They bruised past their opponents without fuss, easing to a 4-0 victory on Wednesday 9th February. Despite going through and racking up an eye-catching scoreline, AC Milan failed to find top gear. They didn’t need to, such was their ruthlessness in attack that day.

AC Milan supporters saw their team hit the ground running in that match with the opening goal scored by da Conceicao Leao inside the opening 24 minutes of the match. Former Arsenal and Chelsea striker Giroud added a quickfire double when finding the net twice inside five minutes as the first half was brought to a close. Kessie rounded off a perfect match when scoring the fourth and final goal of the day on 79 minutes. It was a stunning show of strength from the team and fans want to see more of the same here.

AC Milan is currently second in the Italian Serie A with 57 points on the board. That places them level with current leaders Napoli while we find Inter Milan in third, just two points off the pace but with a game in hand. This season looks certain to go right down to the wire and AC Milan will believe they are good enough to claim both prizes, winning the Serie A title and adding it to the Coppa Italia trophy. This match gives the players a chance to take their minds off the fight for three points and enjoy the distraction of cup football.

Inter Milan are in the thick of the title race and know that if they win their game in hand over AC Milan and Napoli they will become the favourites to win the title this season. There’s all to play for in Serie A but Inter appear to have gone off the boil in recent weeks and their league form has suffered as a result. They have won just one of their last five league games, losing two and drawing the other two. Without a win in their last four, pressure is building on Inter Milan to get back on track and ask questions of the two teams currently ranked above them in Serie A.

Inter were last seen in league action dropping two points in a surprise goalless draw away to Genoa on Friday evening. That was a road trip they were expected to take maximum points from but the attack wasted a number of clear opportunities and the team ended the match with what they deserved. Genoa defended well, kept their discipline and were good value for a share of the spoils, despite being written off by everyone before kick-off.

In the previous round of the Coppa Italia, we watched Inter Milan beat Roma 2-0 at home, securing their spot in the final four of the competition. Dzeko scored the game’s first goal inside two minutes to help settle any nerves and the game was finished as a contest when Sanchez made it 2-0 with 68 minutes on the clock. They had chances to add more goals to their tally in that quarter-final but 2-0 was more than enough to see them through.

These sides know they can afford to lose this match and still go through to the next round thanks to the two-legged nature of the tie. But neither will be willing to concede any ground to a derby rival. AC Milan and Inter Milan make up one of the most famous fixtures in world football and the stats attached to this match suggest we could be in for another thrilling 90 minutes of play.

Both impressed in the previous round, scoring goals and keeping clean sheets. Inter Milan haven’t been quite as clinical in the league of late but they remain within touching distance of the leaders and will believe they have what it takes to win both titles, denying AC Milan in each competition.

Make sure to bet on AC Milan v Inter Milan with 22Bet!