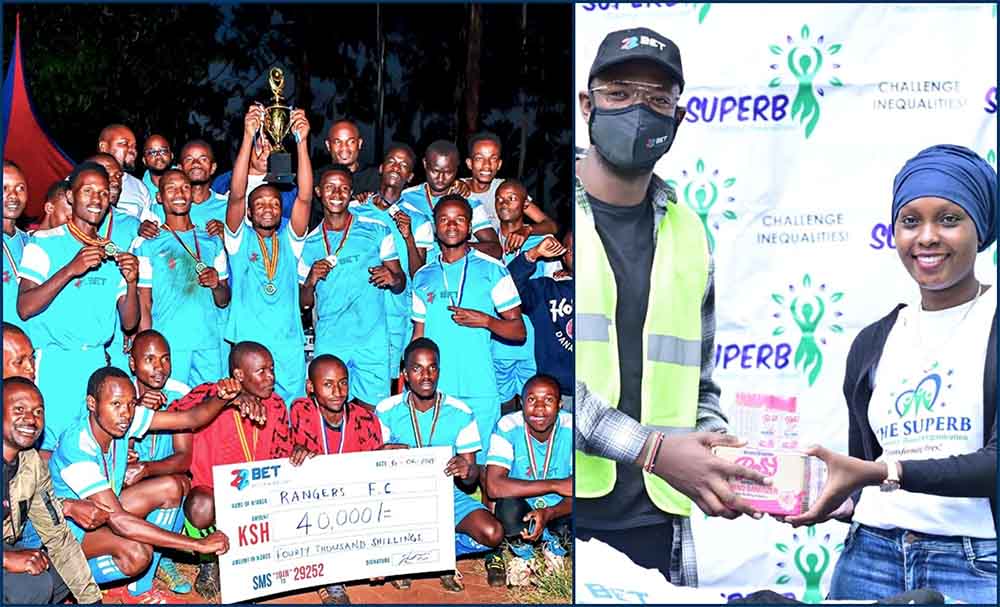 As part of its corporate social responsibility (CSR) efforts, 22Bet Kenya recently sponsored an amateur football tournament and made a donation to a womens’ community-based organization (CBO).

22Bet held the amateur football tournament in Tharaka-Nithi county. The tourney featured cash and equipment prizes. Competitions were held for both men and women. The donation to the Superb CBO included such essentials as hand sanitizers, face masks, and T-shirts.

These efforts come just a few weeks after 22Bet sponsored Kenyan boxing legend Rayton Okwiri to help him prepare for a world title fight, which will be held this August in Nairobi.

A total of 14 teams took to the field in early June to take part in a football tournament in Tharaka-Nithi County, Maara Constituency. 22Bet Kenya sponsored the tournament in collaboration with the Bongo Foundation.

The men’s tournament included 10 teams that battled for a prize pool of Ksh 95,000, as well as uniforms, balls, and, of course, the tournament trophy. The tourney was won by the Rangers.

4 teams participated in the women’s tournament. It was won by the Kiera Starlets.

Playing in front of a football legend

The tournament was attended by Dennis Oliech, one of the most legendary Kenyan football players of all time.

Oliech played professional football in France (Nantes, Auxerre, Ajaccio) and the Middle East (Al-Arabi, Dubai CSC). In 2019, he returned to the Kenyan Premier League to play for Gor Mahia F.C. and became the highest-paid football player in Kenyan football.

Oliech commented highly on the tournament and encouraged young players to participate in such events as it can be a great opportunity for their talent to get noticed by professional teams.

“Talent pays,” Oliech said, “but you have to come out and compete with the best.”

22Bet Kenya aims to continue supporting local Kenyan talent by holding future sports tournaments. And the sponsorship won’t be limited to just football, either. We’ve heard it loud and clear from the local community that help is also needed for Kenyan talent in other sports disciplines.

It is high time that someone started promoting grassroots football in Kenya, which lacked sponsors all these years.

22Bet believes that a lot of talent in Kenya is wasted due to a lack of funding. We promise to do our best to help nurture local talent into future superstar athletes.

22Bet Gives a Helping Hand to Girls & Women in the Slums

22Bet’s efforts to give back to the local community aren’t limited to sports. In late May, 22Bet donated various items (including hand sanitizer and medical masks) in support of girls and women in the slums.

The donation was made to the Superb CBO. It is a community-based organization that is currently championing female empowerment and the battle against the COVID-19 pandemic. The organization currently engages approximately 130 girls and women nationwide.

As part of our corporate social responsibility efforts, 22Bet Kenya aims to offer its support to various organizations in the country whose goal is to make a positive impact on the local community.