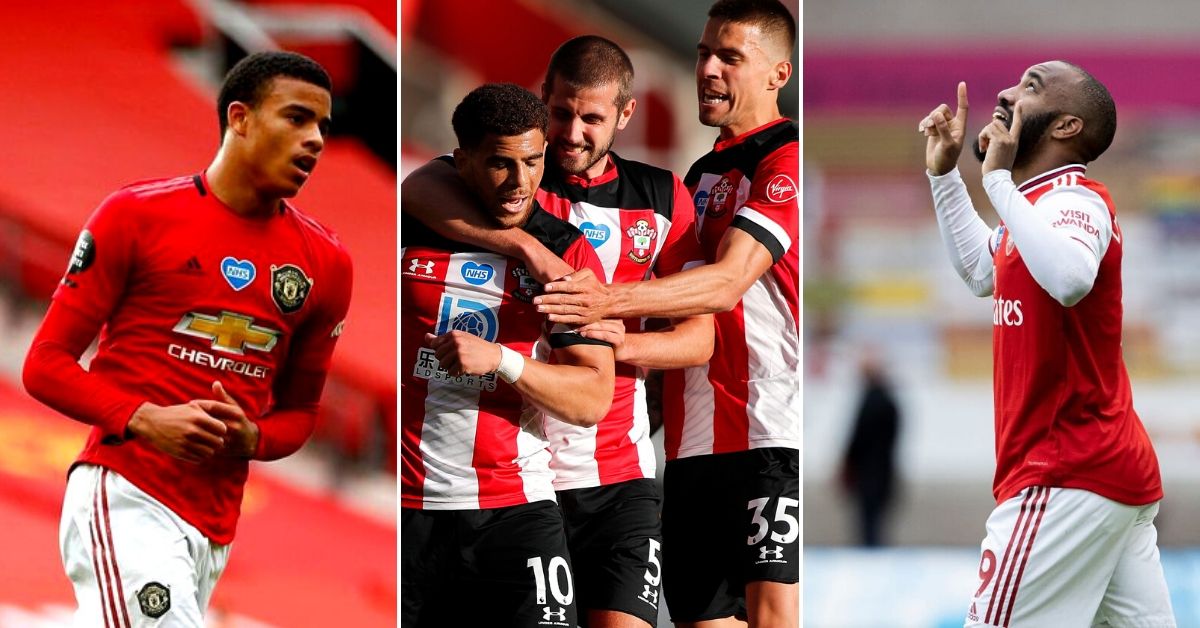 33 down, five more to go! There was an epic seven-goal thriller at Old Trafford, Man City are defeated in Southampton, and much, much more! These are the highlights and round-up of Premier League Matchweek 33.

What an absolute thriller at Old Trafford this Saturday! Seven goals, two penalties, and countless glorious strikes. Bournemouth shocked Manchester United with a 15th-minute opener by Junior Stanislas, but Ole Gunnar Solskjaer’s men quickly turned it around. The brilliant Mason Greenwood, who impressed in the 3-0 win over Brighton in midweek, leveled the score with a superb effort that was followed by Marcus Rashford’s penalty spot-kick. The Frenchman has become the first Premier League player to reach 10 goals in all competitions during 2020. And to end the first half on a high, Anthony Martial made it 3-1 just before time with a magnificent curler into the top corner.

20 – With his penalty against Bournemouth, Marcus Rashford has become the first English player to score 20 goals in all competitions in a season for Man Utd since Wayne Rooney in 2011-12 (34). Devilish. pic.twitter.com/kgKhwGRFso

The second half kicked off with another penalty, this time for the visitors and Joshua King pulled one back for Bournemouth to make it 3-2. This action-packed match just kept on giving and Eddie Howe’s men reached their threshold when Arnaut Danjuma’s would-have-been equalizer was disallowed for offside.

One with each foot. 👣 pic.twitter.com/uLJWy3iad8

But it was nowhere near over. Greenwood scored a fantastic goal from the craziest angle to make it 4-2, which was followed by Bruno Fernandes’ epic free-kick from the edge of the box. Whoa.

Manchester United remain fourth with 55 points, whilst relegation-threatened Bournemouth are 19th with 27 points.

Contrary to what we predicted, Arsenal traveled to Molineux for a massive win that might keep their hope for a Champions League spot alive for a little longer. The hosts had a few chances and stood strong until just before half-time when 18-year-old Buyako Saka (thank God he signed!) scored an outstanding left-foot volley – an unforgettable strike as his first-ever Premier League goal.

Alexandre Lacazette sealed the final score with five minutes left when he fired a pass from Joe Willock past Wolves keeper Rui Patricio. This was his first away goal in the Premier League since February 2019 versus Huddersfield; his last 10 goals have all been at the Emirates.

Arsenal are in seventh place with 49 points, just three behind Wolves, who are sixth on the Premier League table.

Yep, you read correctly. Man City were defeated by Southampton with a magnificent effort by Che Adams, who has now netted his first goal for Ralph Hasenhuttl’s side; it arrived in his 25th appearance, with his 22nd shot in the competition.

It wasn’t for lack of trying. Pep Guardiola’s side had 26 shots, six on target during the match at St Mary’s Stadium on Sunday. This is the first time that Guardiola has lost three consecutive away league games in his managerial career.

26 & 0 – Man City had 26 shots in this game – their highest tally in a Premier League match without scoring since March 2016 versus rivals Man Utd (also 26). Misfiring. #SOUMCI pic.twitter.com/1Sx1ieTgzh

But let’s get back to the goal – what a beauty! It was the longest-range Premier League goal so far this season (39 yards), and it was definitely worth the wait. If the stadium had crowd it would have ripped at the seams in pure euphoria.

“When you hear how much the guys were celebrating him as he went into the dressing room, then you know how happy they are he scored,” Hasenhuttl said. “He has always been working hard. He showed the trust we had in him to start him today was the right one.”

Leicester completed a crucial win when they beat Crystal Palace at home and continue to keep a tight grip on third place. Also, welcome back Jamie Vardy, who scored an impressive brace at King Power Stadium on Saturday.

Brighton traveled to Carrow Road and beat soon-to-be-relegated Norwich one goal to nil. Spurs overcame Everton with a single goal in a dull match at the Tottenham Hotspur Stadium on Monday night.

Champions Liverpool beat Aston Villa at home with two late goals by Sadio Mane and Curtis Jones. Newcastle and West Ham reached a 2-all stalemate in an engaging clash at St James’ Park.

That’s it for Matchweek 33! See you on Thursday for the round-up and highlights of Matchweek 34. Make sure to bet with 22Bet!